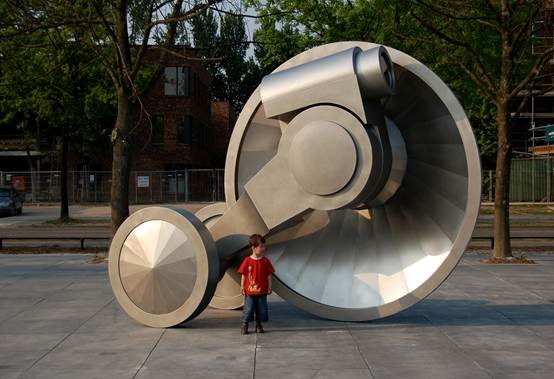 Mapping Rotterdam is the kick-off of CBK Rotterdam Celebrates Art and the City and takes place at two locations at Hofplein: Hugo Vrijdags Signifier 'means' the Nieuwe Delftse Poort (1995) by Cor Kraat and at the rear of Hofplein 19, accessible via the Luchtsingel, a projection of animation studio Afterlight becomes visible. With these two light events, BKOR (a program by CBK Rotterdam) revives the forgotten art history chapters of the city center. Mapping Rotterdam takes place during the three days of Motel Mozaïekque.

Thursday evening 7 April, 20: 00 hour
Mapping Rotterdam starts on Thursday evening 7 April the square in front of the Nieuwe Delftse Poort. BKOR welcomes everyone at 20: 00 hour with a recitation of the poem 'Ode to 010' by and through City poet Hester Knibbe, specially written for Rotterdam Celebrates The City!. After a column of Paul Thursfield (Creative Director Philips) starts the laser animation of the Signifier, an object from Hugo Friday, with a performance by musician poet. Around 20: 30 hours the route is continued to the Luchtsingel; from the bridge is the projection 1960BIRDS2016 from studio Afterlight to see.

The Signifier: Light shadow of the Delftse Poort
De Signifier is an object of visual artist Hugo Vrijdag that suddenly looms up in the cityscape. When it gets dark, the Signifier in action and write it with a green laser beam Light shadow of the Delftse Poort on the Nieuwe Delftse Poort. This monumental work of art by Cor Kraat from 1995 is based on the once-visible eighteenth-century Delftse Poort, which was demolished after 1940 to provide ample space for new city plans. Kraat designed his version in ship's steel, as a line drawing in space. In twenty years this newer gate has also been trapped by the changing city, between traffic and buildings. The laser projection of the Betekenaar scans the contours of the image and rebuilds it in the dark. The light artwork of Vrijdag is therefore an ode to the builders of Rotterdam who are constantly building, rebuilding and redefining the city. A tribute to the city carpenter who taught his students how to draw in the old city gate. The laser projection Light shadow of the Delftse Poort can be seen from 7 to 9 April from 20: 45 in the evening at Hofplein. 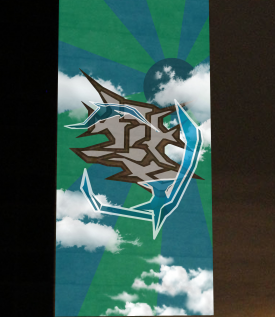 The birds: 1960BIRDS2016
Until 2012, Rotterdam owned a spectacularly large facade artwork from 1960: the meter-high Birds of Jan Bezemer. The brick mosaic formed the outer wall of the Spinoza house of Kraaijvanger on the
Coolsingel. In addition to freedom, a dynamic composition of interlocking wings also represented order and harmony, entirely in keeping with the post-war era. According to aerial photos and postcards, it already determined the appearance of the city from a distance, but only for a short time. It was soon hidden from view by the adjacent new building of the Hilton Hotel adjacent to 1964. This grandiose mosaic was forgotten out of sight. Animation studio Afterlight temporarily brings Bezemers graphic design back to the streets. Afterlight is a design studio that specializes in 3D projection mapping, and that creates light experiences with video and light art. Their work 1960BIRDS2016 is also about 'the character of the city of Rotterdam, for its openness, resilience and design vision, where people live and work. The city is an idea, a design that clearly indicates which direction it wants to go. Rotterdam leaves its people free to develop and evolve to new heights. " 1960BIRDS2016 is projected from 7 to 9 April from 20: 45 in the evening on the rear of Hofplein 19 and can be viewed from the Luchtsingel.
View the entire animation here

Art route kick-off
Three new routes are also announced with these light spectacles, which lead through the special reconstruction art of Rotterdam.

The city center of Rotterdam is rich in reconstruction architecture and art. Reliefs, stained glass and mosaics are beautifully integrated into the architecture. Until today, there is a unique relationship between the design of the city and the prominent place of visual art in public spaces. A special Art and Architecture route leads past art and architecture in post-war Rotterdam, from the façade reliefs of Van Roode to the air ring of ZUS and the Horn of Plenty in the Market Hall. The story about the development of the new city center is told by the streets, squares, buildings and works of art; 75 year Rotterdam in a nutshell. This one Art & Architecture route was made by BKOR, SIR and OMI (Office for Metropolitan Information) and is available from OMI and NAi booksellers, among others.

While Motel Mozaïekque (7-9 April) there are all kinds of routes to walk through the city. Especially during this festival these routes are offered by as many as 30 guides. They guide you for two days through tours, activities, routes, crafts and sports and games along the special festival locations in the city. For most program components you have to register in advance, but you can also come to the guide desk on Schouwburgplein for participation.

LUCI
Rotterdam is a member of the international network LUCI (Lighting Urban Community International) that promotes and researches innovations in public lighting and urban design. CBK Rotterdam contributes to this with art-historical meaningful lighting projects. One of the spearheads of Rotterdam involves illuminating public art and looking for opportunities to experience the public art collection in a different way, through light. In these two temporary events, BKOR (a program from CBK Rotterdam) works together with participants in GLOW (light festival Eindhoven). The light events were developed in collaboration with Suna Productions.

Mapping Rotterdam and the various art routes are being realized in the context of CBK Rotterdam Celebrates Art and the City, a project with various components including the exhibition Utopian Dreams in TENT (22 April - 10 July), a temporary sculpture park in the Rose Garden of the Museum Park (1 June - 1 October), a symposium on Rotterdam art in public space and the book presentation of Sculptures. Urban embellishment in Rotterdam since 1940 (by Siebe Thissen, head of BKOR). Mapping Rotterdam is made possible by Rotterdam Celebrates The City!, in collaboration with OMI, the municipality of Rotterdam, the Rotterdam Library and Motel Mozaïekque.

Uproot Rotterdam A collection of artworks forms a temporary sculpture park this summer.
Z-files XL: the unique art collection of Rotterdam Multi-day event about artworks in the Rotterdam street scene
Sculptures. Urban embellishment in Rotterdam since 1940 A new book written by Siebe Thissen (head of BKOR) about the reconstruction in Rotterdam and the role that art played in it
Utopian Dreams TENT shows plans and dreams of artists and architects for a new Rotterdam.
Strolling on the Flyover Saturday 16 April, Kleinpolderplein is a pedestrian promenade for one day, full of art, music, performances and lectures.
We celebrate the art! CBK Rotterdam celebrates with 'Rotterdam celebrates the City' with light events, art routes, a large exhibition in TENT, a pop-up outdoor exhibition, a book about the visual history of Rotterdam and Z-Files XL.
CBK Rotterdam Celebrates Art and the City Under the name Rotterdam Celebrates The City! events take place throughout Rotterdam at the initiative of Rotterdam Festivals that celebrate the completion of 75 years of reconstruction, and thus look ahead to the future of our city. CBK Rotterdam is celebrating along with a large indoor exhibition, a pop-up outdoor exhibition, a new book about the visual history of Rotterdam, an XL episode
LUCI: City Under Microscope During the international conference LUCI: City Under Microscope in Rotterdam, the CBK Rotterdam provides a number of presentations and tours.