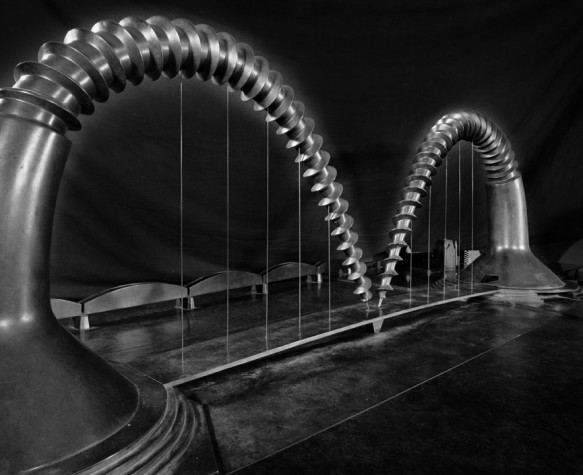 From Friday April 22 shows TENT plans and dreams of artists and architects for a new Rotterdam in the extensive group exhibition Utopian Dreams. As part of 'Rotterdam celebrates the city!', Collector and former museum director Reyn van der Lugt brings together ten historical and contemporary fantasies about Rotterdam. The often controversial and imaginative projects provoke a broader debate about the future of Rotterdam. The city continues to develop, becomes more diverse, more innovative and more ecological. Now that the city is (almost) finished with its characteristic skyline, the question arises: how does the artist view Rotterdam today? What would the city need?

Since the reconstruction, Rotterdam has reinvented itself on the basis of major manifestations, far-reaching ambitions and utopian plans. Artists and architects play a leading role in this. How does the artist look at the Rotterdam of the future? And what are the urgent issues for this metropolis? TENT presents various answers to these questions: from the bent screws that Claes Oldenburg designed for a bridge over the Maas, the free state that Atelier Van Lieshout proclaimed, to writer Elfie Tromp who formulates her future live in the exhibition.

Urban fantasies
In 1969 sets Wim Gijzen to transform Schouwburgplein into a green pasture, complete with cows, pollard willows and a ditch. The design has never moved beyond the drawing board. The photo montage of the cow meadow in the heart of Rotterdam, on the other hand, started to take on a life of its own.
Fascinated by the typical Dutch arched bridges Claes Oldenburg in 1977 a bridge with two bent screws whose points would touch each other in the middle. When Oldenburg learned that Rotterdam had plans for a new bridge, he was convinced that his Screwarch Bridge should come here. At the invitation of museum director Wim Beeren, he made a location study and a model. The municipality eventually had other plans.
Rem Koolhaas made a lookout tower with OMA around 1980 as an eye catcher for the Boompjes in Rotterdam. A part of the old Willems Bridge that was to be demolished across the Maas would be erected and converted into an approximately 100-meter-high watchtower, a playful competitor of the Euromast.
In the context of the Rotterdam '88 manifestation, he became an artist-architect John Körmeling asked to make a new design for the layout of the Eendrachtsplein. Körmeling got the idea. He thought it was not a square at all and placed a building in the middle that would give the square its character with its cultural functions.
Founded 2001 in April Atelier Van Lieshout AVL-Ville, a free state with its own constitution, flag, currency and community in the rugged Rotterdam Vierhaven area. Visitors, residents and artists were invited to live and work in this community. After a number of successful but turbulent months, the free state had to close its doors at the behest of the municipality.

The legendary project Pontoon 010 was developed at the invitation of the Port of Rotterdam Authority. Utopia consisting of Hans Oldewarris, Peter de Winter, Chiel van der Stelt and Victor Mani designed a pontoon with stands for as many as 1100 people, including the stage and bar. The immense pontoon sailed back and forth over the Maas a number of times in the summer of 1980. The audience had a first-rate view of the rapidly changing skyline of Rotterdam.

Contemporary visions of the future
Van der Lugt invites five artists to develop new visions for the city of Rotterdam. Author Elfie Tromp regularly takes place at her desk in the exhibition to work live on her future. Artist Han Hoogerbrugge takes us on a virtual walk along everything he misses in today's city. Photographer Elian Somers questions the contemporary city paradise in a series of new photos. Designer Richard Hutten makes a big gesture by decorating the future skyline of Rotterdam. A series of low-tech windmills adorn the roofs of the city. The architects collective Cookies wants to transform Rotterdam into the only city in the world where we can remain anonymous, in which secrets can remain secret, in which codes and passwords cannot be hacked.

Compiler Reyn van der Lugt was since the late 1970s one of the organizers of art and architecture events such as Architecture International Rotterdam and Rotterdam '88 / The city as a stage, giving Dutch and international artists and architects the space to present their visions of the future in the city. Partly as a result of this, the attention of the architecture and art world was focused on Rotterdam and Rotterdam was given a permanent place in the post-war architecture and art debate. Van der Lugt was, among other things, deputy director of the Rotterdam Art Foundation, cultural attaché in New York and director of the Groninger Museum.

Uproot Rotterdam A collection of artworks forms a temporary sculpture park this summer.
Z-files XL: the unique art collection of Rotterdam Multi-day event about artworks in the Rotterdam street scene
Sculptures. Urban embellishment in Rotterdam since 1940 A new book written by Siebe Thissen (head of BKOR) about the reconstruction in Rotterdam and the role that art played in it
Strolling on the Flyover Saturday 16 April, Kleinpolderplein is a pedestrian promenade for one day, full of art, music, performances and lectures.
Mapping Rotterdam Laser projections and video mapping at the Motel Mozaïekque weekend
We celebrate the art! CBK Rotterdam celebrates with 'Rotterdam celebrates the City' with light events, art routes, a large exhibition in TENT, a pop-up outdoor exhibition, a book about the visual history of Rotterdam and Z-Files XL.
CBK Rotterdam Celebrates Art and the City Under the name Rotterdam Celebrates The City! events take place throughout Rotterdam at the initiative of Rotterdam Festivals that celebrate the completion of 75 years of reconstruction, and thus look ahead to the future of our city. CBK Rotterdam is celebrating along with a large indoor exhibition, a pop-up outdoor exhibition, a new book about the visual history of Rotterdam, an XL episode