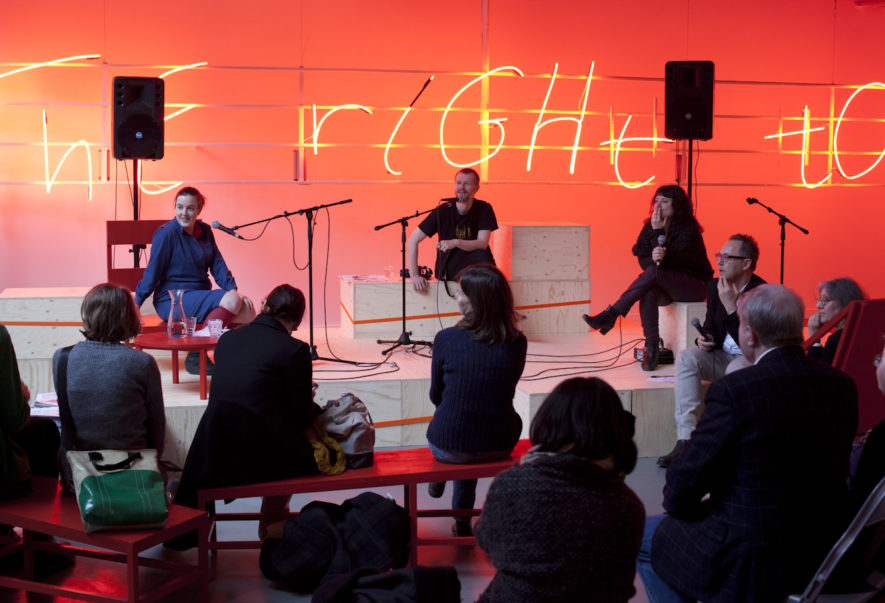 On Thursday 7 February during ART Rotterdam, ThE rIGHT TO RighT / WrOnG by artists Libia Castro and Ólafur Ólafsson will be permanently installed on the silo or AVL Mundo at Keileweg 18. The unveiling of the neon graffiti will be celebrated with a toast on Friday 8 February from 17.00 to 18.00 hrs.

About the work
Libia Castro and Ólafur Ólafsson created ThE rIGHT TO RighT / WrOnG for the 7th Liverpool Biennial exhibition The Unexpected Guest in 2012. Since then, the work has been shown at exhibitions including TENT Rotterdam. The project includes two iterations: a flashing monument neon sign illuminated the city from the south facade of St George's Hall, a symbolic landmark of Liverpool; and a free newspaper distributed throughout the Biennial venues, in city libraries, cafes, bookshops, as an insert in the Liverpool Post and online.

The newspaper features an article commissioned to the British feminist writer and philosopher Nina Power, written in dialogue with the artists. This text addresses the subject of ThE rIGHT TO RighT / WrOnG and current global political unrest in a critical and satirical manner. The newspaper also confronts us with the paradoxes of a document such as The Universal Declaration of Human Rights, by presenting us with another collaborative text work from the artists and Nina Power, "The Partial Declaration of Human Wrongs."

Through this campaign, the artists assert that this fundamental right to right is the first step towards a real and communal socio-political emancipation: above and beyond the multitude of international conventions, declarations, protocols and constitutions that specify and regulate the rights that nation- states and transnational agencies have made available to, or withhold from, citizens.

The neon sign alternately reads THE RIGHT TO RIGHT and ThE rIght tO WrOnG, and also introduces a new unspeakable word that blends RighT and WrOnG together, visualizing a conundrum. A provocative gesture that points among others at the painful paradoxes of law and justice. The project functions as a frame for other works, in which the fundamental 'right to right' and the conundrum or 'rights / wrongs' ”are further explored within specific cases.

About AVL MUndo
ThE rIGHT TO RighT / WrOnG will be revealed as part of Big and Plenty a group exhibition taking place at AVL Mundo from 7 to 10 February 2019 during Art Rotterdam. The free newspaper will be available at AVL Mundo. In addition to ThE rIGHT TO RighT / WrOnG, the exhibition features works by Wouter Paijmans, Neo Matloga and Atelier Van Lieshout. AVL Mundo is open daily from 12.00 to 18.00 and can be visited free of charge.

Colophon
This project is initiated by BKOR and Atelier Van Lieshout. The light installation is executed by NeonTime. BKOR is a program or CBK Rotterdam, www.bkor.nl.