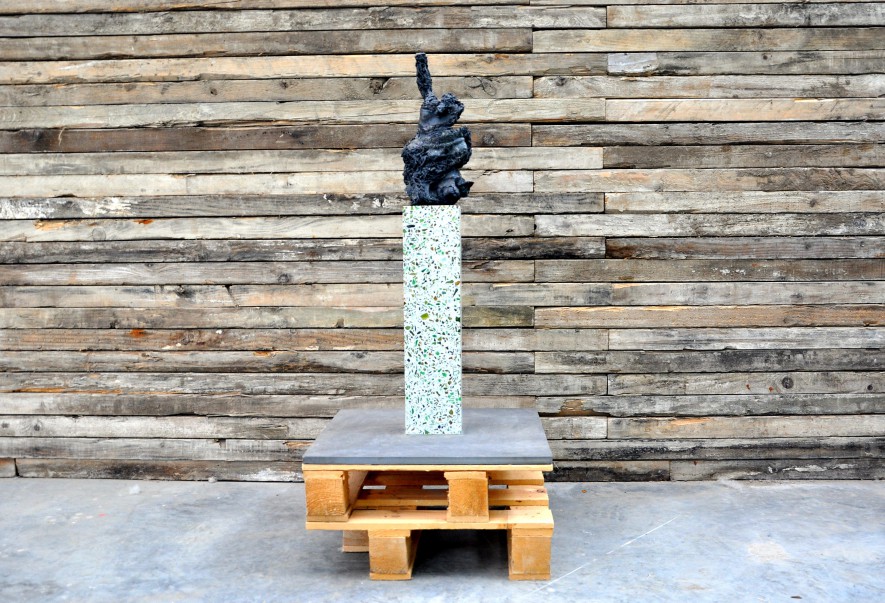 Until the end of October 2015, Rotterdam-based artist Jan Eric Visser presents his latest project Ruins of Desire (2015) at Verbeke Foundation, Kemzeke (B). The title is derived from the definition of waste by a Japanese monk. With Ruins of Desire offers the artist a platform for innovative recycling materials such as Aquadyne and translucent concrete.

Aquadyne, for example, is the material of the sculpture CO2 Neutral produced from 100% waste plastics. High porosity makes root adhesion of plants possible. Vegetables can be grown on it.

The translucent concrete of the base consists of waste materials such as blast furnace slag and glass waste. In addition, it contains a mineral that breaks down air polluting substances under the influence of UV light. For example, it breaks down fine dust and inhibits the growth of scale on concrete. Thanks to the glass particles, this purifying effect is enhanced with 40%. The innovative concrete is now being used and shown for the first time. It was developed by the Eindhoven University of Technology, which also contributed to the realization of the project.

According to the artist, both materials embody a new connection between waste and beauty. The beauty of a post-industrial future in which valuable raw materials are no longer incinerated as 'waste'.

The professional practice of Jan Eric Visser has been focusing entirely for 28 years on the transformation of his inorganic garbage into autonomous works of art. On the one hand, he thereby examines the limits of his mastery over form and matter. On the other hand, he thereby addresses social issues such as resource scarcity and over-consumption.