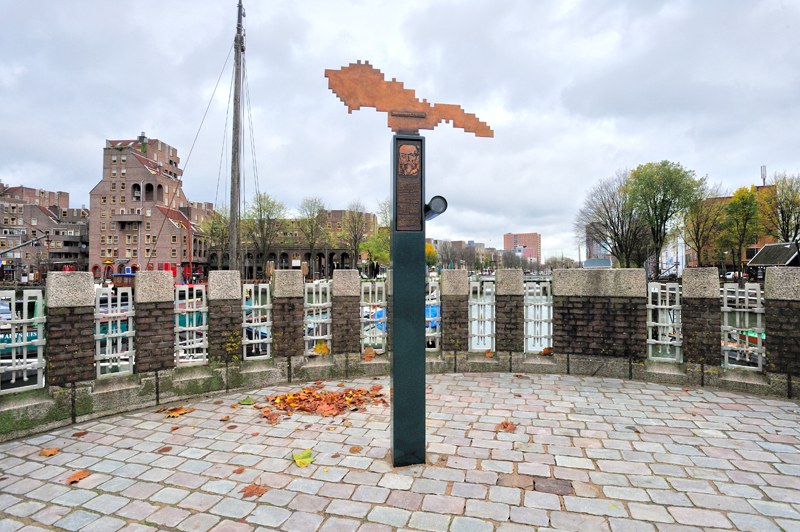 Unveiling of the TG Masaryk monument and Rotterdam

Monument for a man who wrote history in Rotterdam 100 years ago
In October 1914, at the then Weimar Hotel on the Spaansekade in Rotterdam, history was written by philosopher and politician TG Masaryk, later the 1e President of the new Czechoslovakia Republic. On November 5 2015, a little more than 100 years later, is practically the same location by the artist Hans Citroen designed monument TG Masaryk and Rotterdam unveiled: at the Jan Kuitenbrug overlooking the Spaansekade Rotterdam, the former location of Hotel Weimar where TG Masaryk sketched the contours of the new country of Czechoslovakia.

The unveiling of this monument is public, and takes place on Thursday 5 November at 13: 00 hour. Present are the President of the Senate of the Czech Republic mr. Milan Štěch and other prominent guests.

Mr. Frans Weisglas, former diplomat and former chairman of the second chamber will speak at the invitation of the initiators. You can read his speech below, or download it via this link. 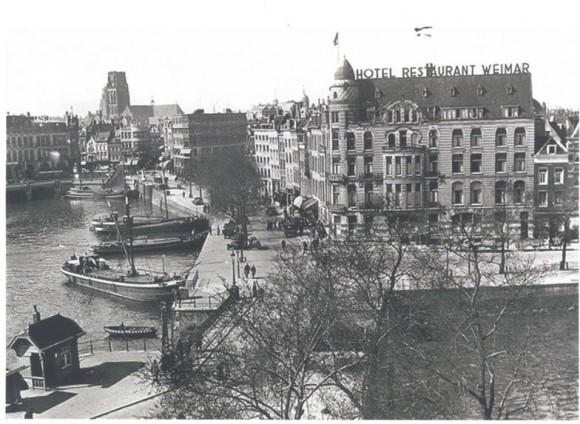 Historical background
In October 1914, shortly after the outbreak of WWI, Czech philosopher and politician Tomáš Garrigue Masaryk visits Rotterdam to secretly meet the British historian and publicist Robert W. Seton-Watson. In Hotel Weimar on the Spaansekade, Masaryk shares with him his vision of Central Europe in a defeat of Germany and Austria-Hungary and outlines the contours of a new state, Czechoslovakia. Via Seton-Watsons memorandum of 5 November 1914, this vision is known abroad by the allies of then, the United Kingdom, France and Russia. Masaryk manages to mobilize international support for Czechoslovakia during WWI. From 1918 to 1935, Masaryk is the first president of Czechoslovakia.

The monument
From the Masaryk monument on the Geldersekade you look at the corner of the Spaansekade and the Haringvliet where until the German bombing in 1940 Hotel Weimar stood, at the same time you see the hotel by a viewer. Beneath the visible contours of Czechoslovakia is an image of President Masaryk and an explanation in four languages.

About Hans Citroen
Hans Citroen (1947) is a Rotterdam artist. With Bob van Persie, he managed the legendary Museum de Keikdoos in Rotterdam Central Station from 1974 to 1976. (The 'Keikdoos', the smallest museum in the Netherlands (1977) - YouTube). Citroen became known as an artist with Kunst en Vaarwerk, a group of artists that he co-founded in 1978, and with which he played a major role in Rotterdam art history in the field of art in public space. In 2010 he made the book Auschwitz - Oświęcim with his partner Barbara Starzyńska. His book Auschwitz de Judenrampe about a forgotten platform was published in 2014. Read more about this artist here.

donors
The monument has been made financially possible through contributions from Aegon Slovensko (Bratislava), the Embassy of the Czech Republic in the Netherlands, the Embassy of the Slovak Republic in the Netherlands, Jarmila and Paul ten Berge - Henneman, CBK Rotterdam, the Comenius Museum Foundation (Naarden ), CTP Invest (Humpolec), Slavka and Robert Fremr, Hartmanova.eu Legal Advice Agency, Royal De Heus (Ede), Chris Hijmans, the Ministry of Foreign Affairs of the Czech Republic / Czech Centers, Plantema, Jan Štedrý and Šárka Štedrá from Prague.

The monument was made by the Czech bronze foundry HVH Foundry from Horní Kalná and the Rotterdam assembly and construction company Dick van Campenhout BV.

Short speech by Frans Weisglas at the monument "TGMasaryk and Rotterdam"

The name of the monument "TG Masaryk and Rotterdam" gives us an indication of the choices made by visual artist Hans Citroen when he was commissioned to design the monument.

He draws our attention to the historic meeting between Professor Masaryk and Robert Seton-Watson in 1914. His "artist's impression" of Czechoslovakia in 1918 symbolizes the contours of this new state that Masaryk sketched four years earlier, here in Rotterdam. And by choosing the Geldersekade as the location for the monument, the artist invites us to form a picture of the place where Masaryk and Seton-Watson were staying: hotel Weimar on the other side of the "Old Port". At the time, the Weimar hotel was a well-known building in Rotterdam, but it was destroyed in 1940.

The monument is a beautiful result of Dutch-Czech cooperation. The bronze was made by Czech masters, they made use of both traditional and digital techniques, the pillar made in Rotterdam.

"TGMasaryk and Rotterdam" reveals a hidden past in Rotterdam and the artwork of Hans Citroen is an asset to Rotterdam as a world-famous cultural city.