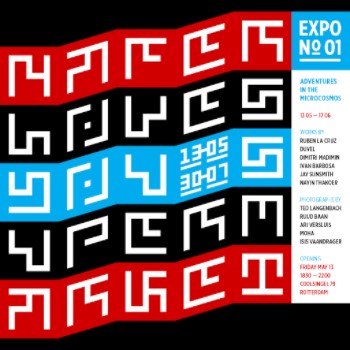 On 13 May, NaferLovesYou Supermarket will officially open its doors - from that day Coolsingel number 79 in Rotterdam will change for a period of 10 weeks into a 'store' where the concept of identity is central. Two exhibitions will take place during this period; from 13 May to 17 June the exhibition Adventures in the Microcosmos and the exhibition from 25 June to 30 July Sarnami.

NaferLovesYou Supermarket is a space where exhibitions and activities take place that focus on the changeability of identity over the years and that we try to find the answer to the question of how we deal with individuality and individuality in modern society. Adventures in the Microcosmos elaborates on the origins of various subcultures including Ruben la Cruz, DuvelDuvel, Dimitri Madimin, Jay Sunsmith and Navin Thakoer. Ari Versluis, Ted Langenbach, Ruud Baan and Isis Vaandrager are on the program during the opening; Thakoer also gives a performance itself.

The supermarket explores how stereotypes created in the mass media affect our self-image and our perceptions of other people. In every generation there are counter-movements that recognize that identity is changeable and that we have the power in modern society to reinvent ourselves.

NaferLovesYou Supermarket is a moving and living investigation: How do we form our identity? NaferLovesYou Supermarket brings together different identities and undermines stereotypes. It fosters mutual understanding of who we really are, creates pride for our own glocal culture and is an addition to contemporary Dutch history and cultural discourse.

NaferLovesYou Supermarket is an initiative of Navin Thakoer in the context of Rotterdam Celebrates the City and is made possible with the support of Rotterdam Festivals, the Art of Impact, Municipality of Rotterdam and CBK Rotterdam.