The Landelijk Moluks Monument Foundation is passionately working on the realization of a sustainable monument on the Lloydkade in Rotterdam.

In connection with it Rural Moluccan Monument initiated by Stichting Landelijk Molucca Monument, a monument will be placed on the Lloydkade in Rotterdam in mid 2022. To announce and to generate attention for this monument, six trotters with portraits of people from the Moluccan community have been placed. This photo series was created by a trio of Moluccan youngsters (photographer Elizar Veerman, producer Uriël Matahelumual and historian Joaniek Vreeswijk) who want to draw attention to this photo series by means of a temporary outdoor exhibition.

In this project, photographer Elizar Veerman, artist Uriël Matahelumual and historian Joaniek Vreeswijk join forces to create six portraits to develop a timeless document of the Moluccan diaspora in the Netherlands. For this purpose, images and text are used to record what the postcolonial generations within these communities in the Netherlands look like. Veerman, Matahelumual and Vreeswijk go in search of the various sub-communities in the Moluccan diaspora. During meetings at people's homes, the makers get closer to the unique identities, but they also try to bring forward the collective Moluccan reality around it.

This photo series is a cultural initiative in collaboration with the CBK Rotterdam, Lloydsalon and the Moluccan Historical Museum in The Hague. This is to introduce the Municipality of Rotterdam in particular Delfshaven with the Moluccan community and also how the specific piece of Lloydkade has played a major role in Moluccan-Dutch history. 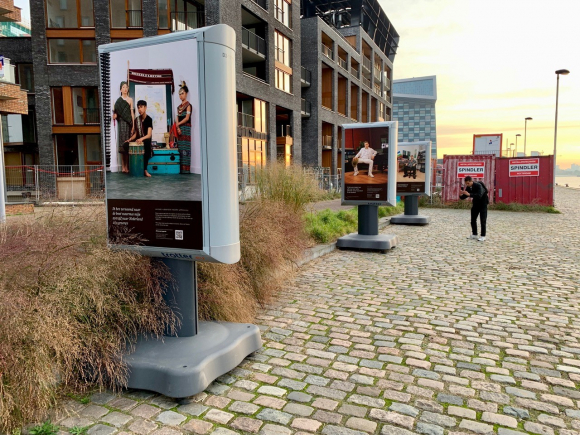 The Landelijk Moluks Monument Foundation is passionately working on the realization of a sustainable monument on the Lloydkade in Rotterdam.