Anyone who says 'Rotterdam' and 'comics' says Martin Lodewijk. Born and raised in Rotterdam in 1939, he grew into one of the most famous cartoonists in the Netherlands. Lodewijk designed the artwork on behalf of BKOR Pale noses, in memory of the Rotterdam children in the hunger winter. The project was made possible in part by the Municipality of Rotterdam and Matrans Holding/Vervat, in close collaboration with real estate developer Leyten en Klunder Architecten. The work will be placed on the facade of the new building at Westewagenstraat 62. Thanks to the close collaboration with Klunder Architecten and Leyten, we were able to integrate this work at this specific location. That is why we are also celebrating this new building in the center together. 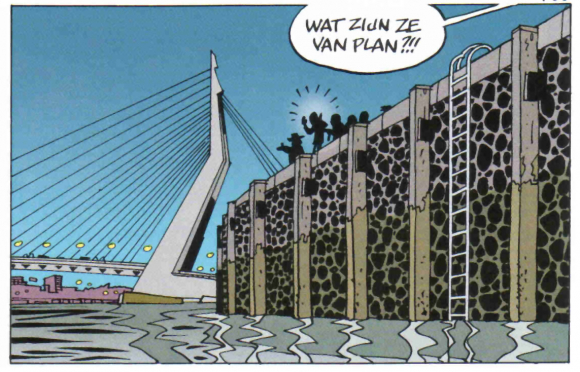 Martin Lodewijk has been a cartoonist for sixty-five years. He grew up in post-war Rotterdam with magazines like Spirou, Heroic en Tom Poes Weekly, and even with American comics, which were easy to find in second-hand bookshops in the port city of Rotterdam. Early on he started trying to make comics himself, and with success: already at the age of seventeen he published cartoons and comics at the Rotterdam company ATH, for magazines (Bolero, Mascot) and booklets (Aerospace, Arent Brandt).
His contribution to the comics world includes the widely known science fiction series Storm and screenplays for all kinds of series in the detective, adventure, western, fantasy and knight genres. He is best known as the author of the series Agent 327, a high-quality strip, in which he also manages to capture his deep love for his hometown of Rotterdam.

About the pale noses

In the final years of the Second World War, approximately 18.000 children from Rotterdam were taken care of in the provinces of Friesland, Groningen, Drenthe, Gelderland and Overijssel. These so-called 'pale noses' found a loving, warm nest with host families in these provinces and regained their strength through the nutritious food. The host families from the northern provinces have made the difference for these Rotterdam children. The shelter with these families literally meant their salvation for these Rotterdammers, in order to prevent them from dying of starvation that lived in Rotterdam. In Rotterdam there are still many 'children' who remember that period with gratitude.