March 21, 1951 – The ship Kota Inten moors at Lloydkade. A historic moment that would define the lives of generations of Moluccans. National Moluccan Monument Foundation (LMM) is working passionately on the realization of a sustainable monument on the Lloydkade in Rotterdam, one of the two places of arrival of the first generation of Moluccans in the Netherlands. It will be a work of art where commemoration, stories are given a place and can be passed on to the next generation

The LMM Foundation has set up a crowdfunding campaign to realize the monument. They desperately need your support. Every euro can continue to tell the Moluccan history. By means of donations they can realize an honorable monument in a unique place for the current and next generation of Moluccans, Dutch and tourists. A place where everyone can reflect on history and learn more about the world around us.

Moluccans and Dutch have been part of each other's history for 400 years.

VEel Moluccan men grandfather service with the KNIL (Royal Dutch East Indies Army). They fought on the side of the Netherlands in World War II. When the Republic of Indonesia became independent in 1949, the KNIIL was dissolved. Because of the political problems in Indonesia that arose after the transfer of sovereignty and the dissolution of the KNIL it was decided to transfer the KNIL soldiers and Marines with their families to the Netherlands for temporary housing. More than 12.500 Moluccans left for the Netherlands on military orders. In February 1951 the first group of Moluccan soldiers with women and children was sent to the City Inten embarked. On March 21, 1951, the ship de City Inten to Rotterdam. However, the stay turned out not to be temporary, returning was impossible.

Looking back on years full of inevitable changes, it can be concluded that the Moluccan residents have merged with their culture and identity into Dutch society. 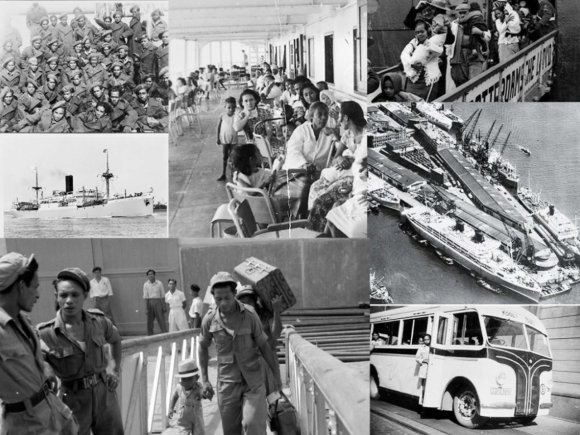 National Foundation Moluccan Monument (LMM) is a foundation consisting of five enthusiastic board members: Yordi Tahamata, Andrew Roos, Karin Pattikawa-Smits, Leila Hamer-van Oorschot and Fiona Roos. They are passionate about keeping the Moluccan history and culture alive. LMM Foundation wants put the Moluccan story of the arrival on the map. This historic event has been neglected for too long. They find it important that the story of pride, pain, perspective, future and hope a visible gets a place. Their mission is a national monument on the Lloydkade in Rotterdam out of respect for the 1e generation of Moluccans and in recognition of the shared past. Knowledge of each other's history leads to greater mutual understanding.