Barbara Helmer (1966) is a visual artist in Rotterdam. She is a painter, and she also draws and screen prints, makes risoprints and murals. Helmer works abstractly; her themes are 'the small parts' and / in 'the big picture'. The color and light of her work evoke the words 'shine through' and 'reflection'. In September / October 2020, Helmer went to Grafikwerkstatt in Dresden for an artist-in-residence. 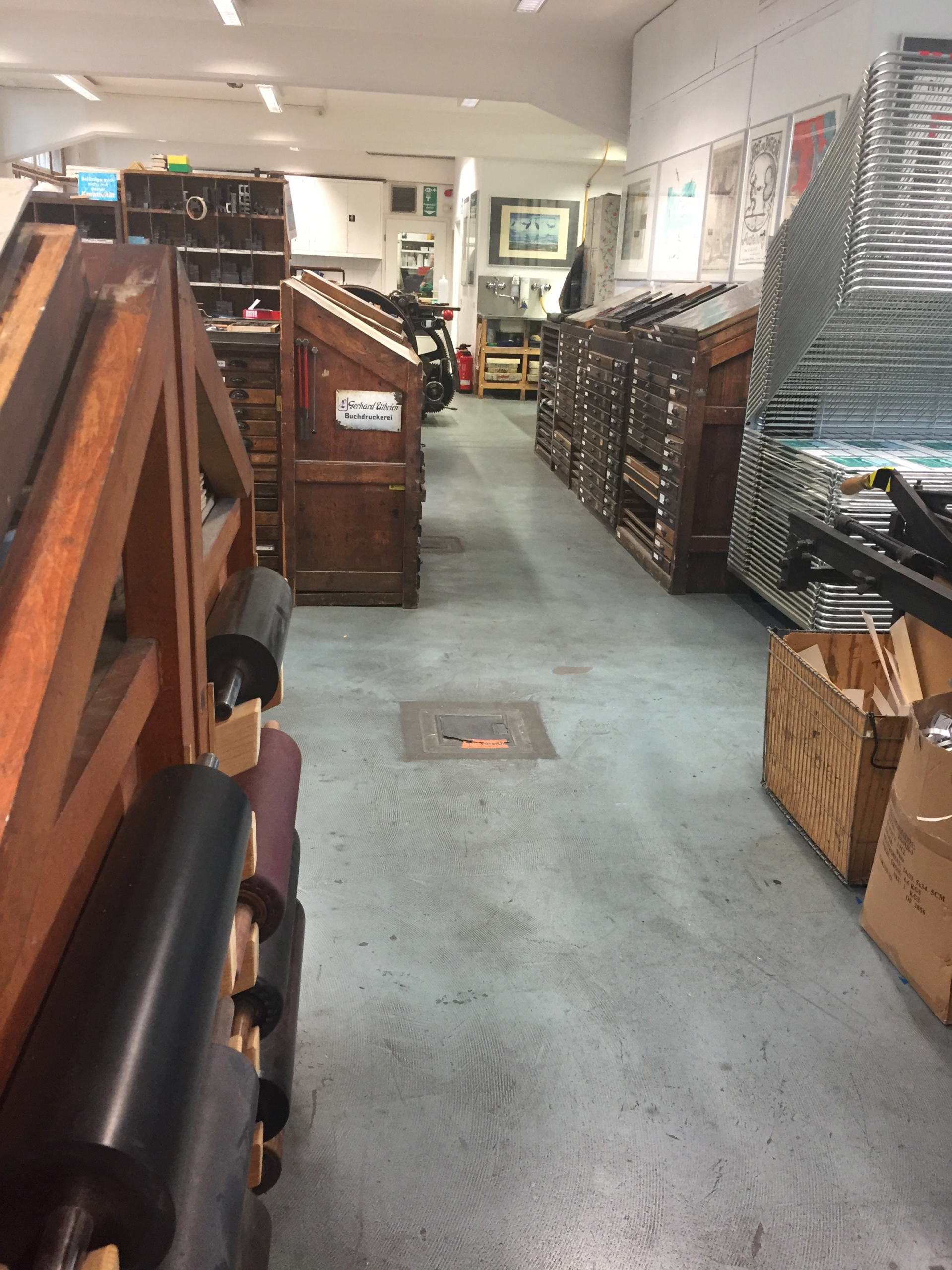 At a time when everyone stayed at home as much as possible to prevent the spread of the corona virus, I traveled as a visual artist to Dresden to work for a month in an exchange program in the graphics workshop there. Despite the duty of masking, I had been looking forward to a train journey, but just before I was due to leave Rotterdam was declared a 'red area', so that I suddenly had to have a corona test with negative results with me that was no more than 48 hours old.

Rotterdam was declared a 'red area'. That meant that I had to cancel my train journey and arrange a test

That meant that I had to cancel my train journey, arrange a test and make sure that I arrived in Dresden on time - now by car - to await the results in quarantine in the guesthouse where I was staying. Luckily it was negative so I could get started. Since my mother was from Hamburg, I speak German easily. Yet I had never been to the former East Germany before, apart from a three-hour visit to East Berlin in 1987 via the well-known check-point Charlie. 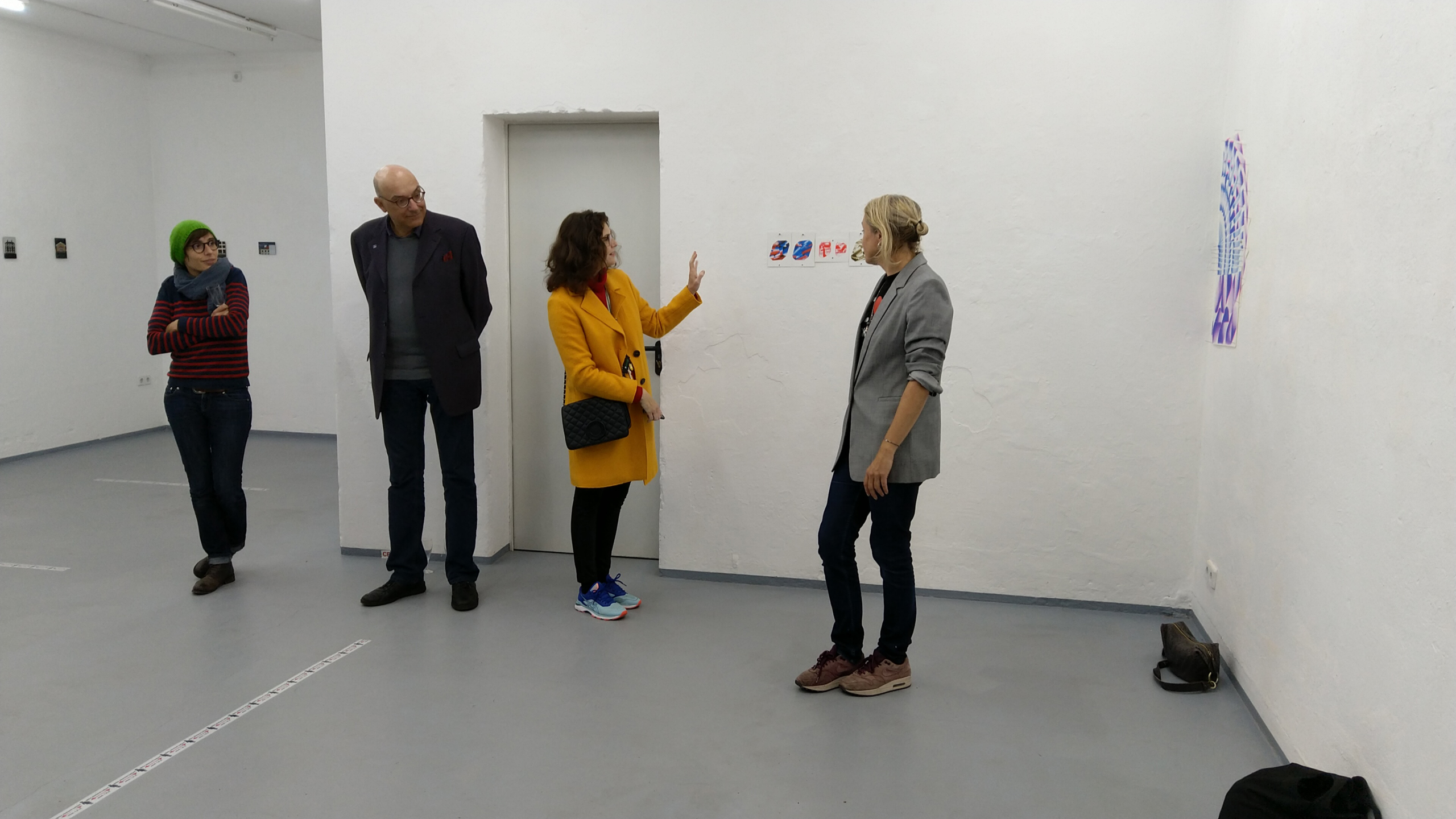 Dresden has a center that was completely rebuilt in Baroque style after the Allied bombings in World War II. The river Elbe runs through the middle of the city. The modern part of the city naturally feels more authentic. And I found a surprising amount from the GDR era: the flats, concrete statues, fountains and special walls. I understood that neighborhood campaigns have recently prevented many demolition plans, and I too would think it would be a shame if it disappeared. 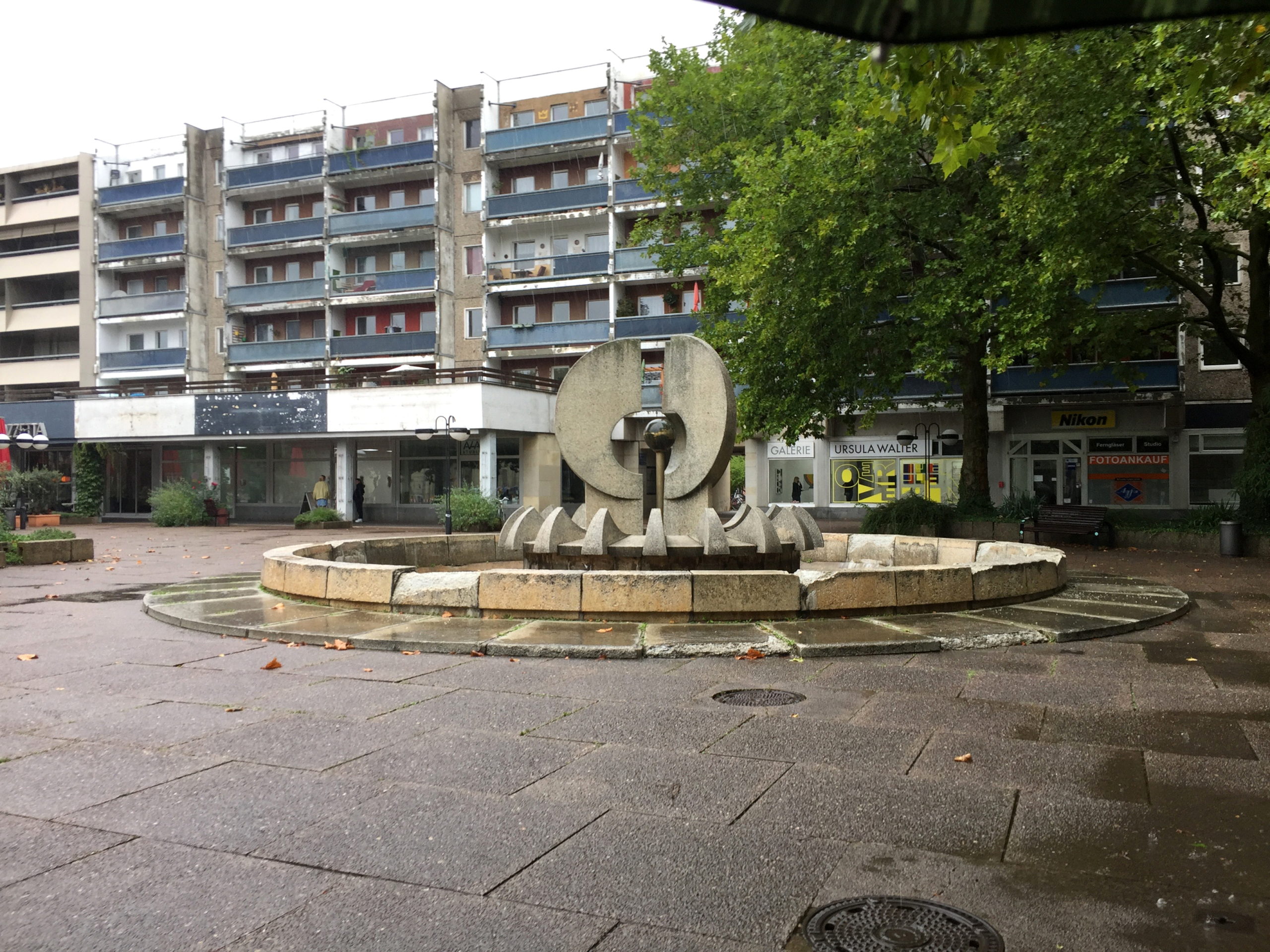 I rented one swap bike with which I cycled to the Grafikwerkstatt Dresden in half an hour. Before and during art school, my experience with graphics consisted only of etching and lithography. It wasn't until much later that I started screen printing and riso printing. Here in Dresden they worked with a technique that was new to me from offset, the Algrafie. This is a printing technique on aluminum plates, somewhat similar to screen printing in the way of transferring the design onto the plate, with lighting and not in mirror image, and it can also be done directly on the plate, as with lithography.

Here in Dresden they worked with a technique that was new to me from offset, the Algrafie

The workshop in Dresden is large, 600 square meters. Everything is solidly furnished, with a lot of dedication, and with carts that are precisely tailored, with beautifully made wooden cabinets and cabinets that partly come from other workshops that were previously closed. The atmosphere is timeless, classic. There are three permanent employees and then there is also regularly the old man who comes to work with the lead letters. At the various workplaces, visitors sit down to work on their own project and make use of advice and guidance from the employees. 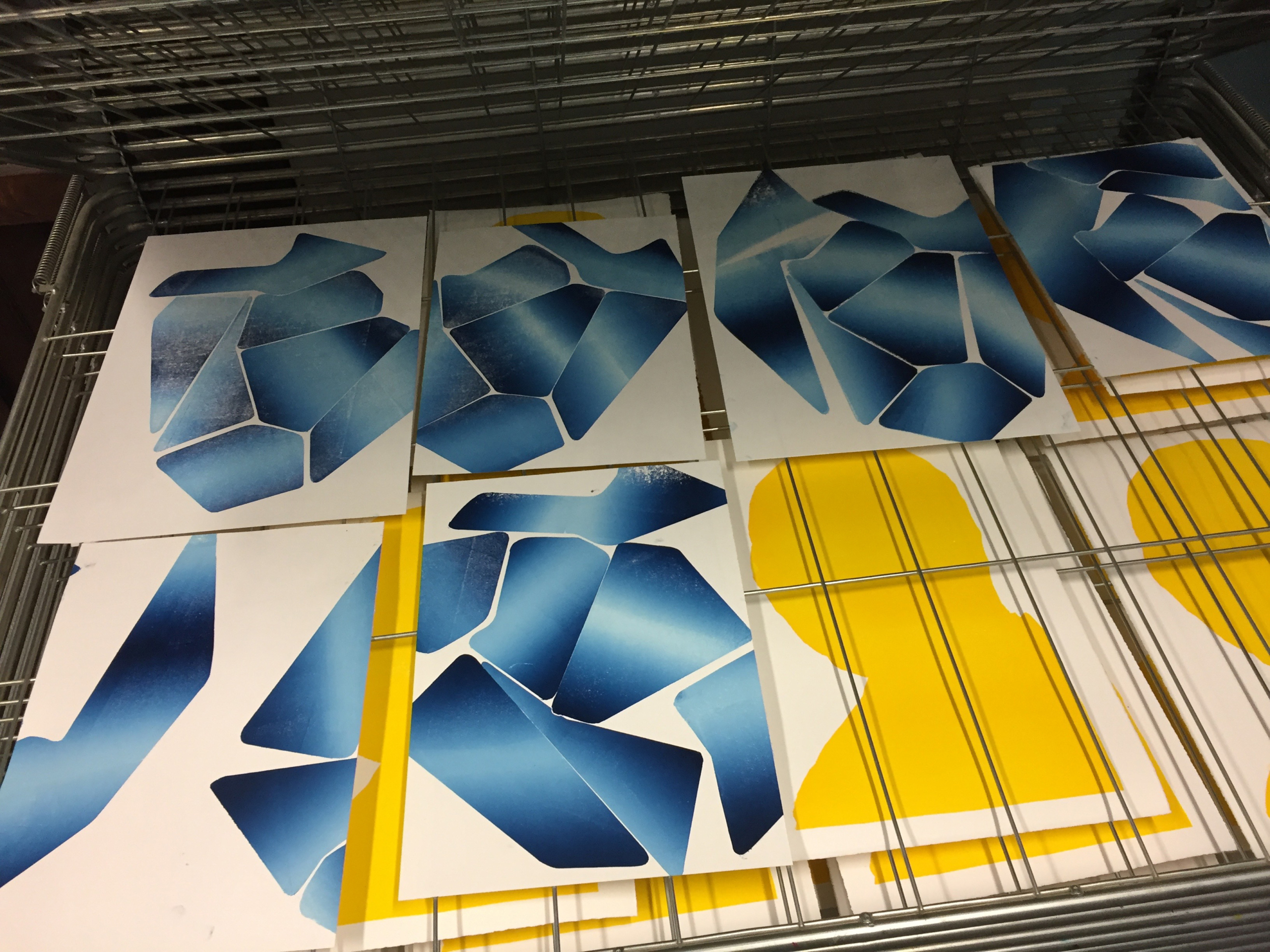 I noticed that the workshop had a history. The printing technique on aluminum had been developed here for many years and the technical knowledge was very extensive. The substantive thinking was emphatically avoided by the permanent employees. Very principally it was invariably said that they were trained as printers and not as artists. There was a tea break at ten o'clock and lunch was served at one o'clock. And exactly at four o'clock the workshop closed. Graphics are usually very labor intensive, and a day in the workshop flew by. The workshop has now been looking for successors, printers or others who want to continue this work for a while. These types of professionals are really hard to find these days. 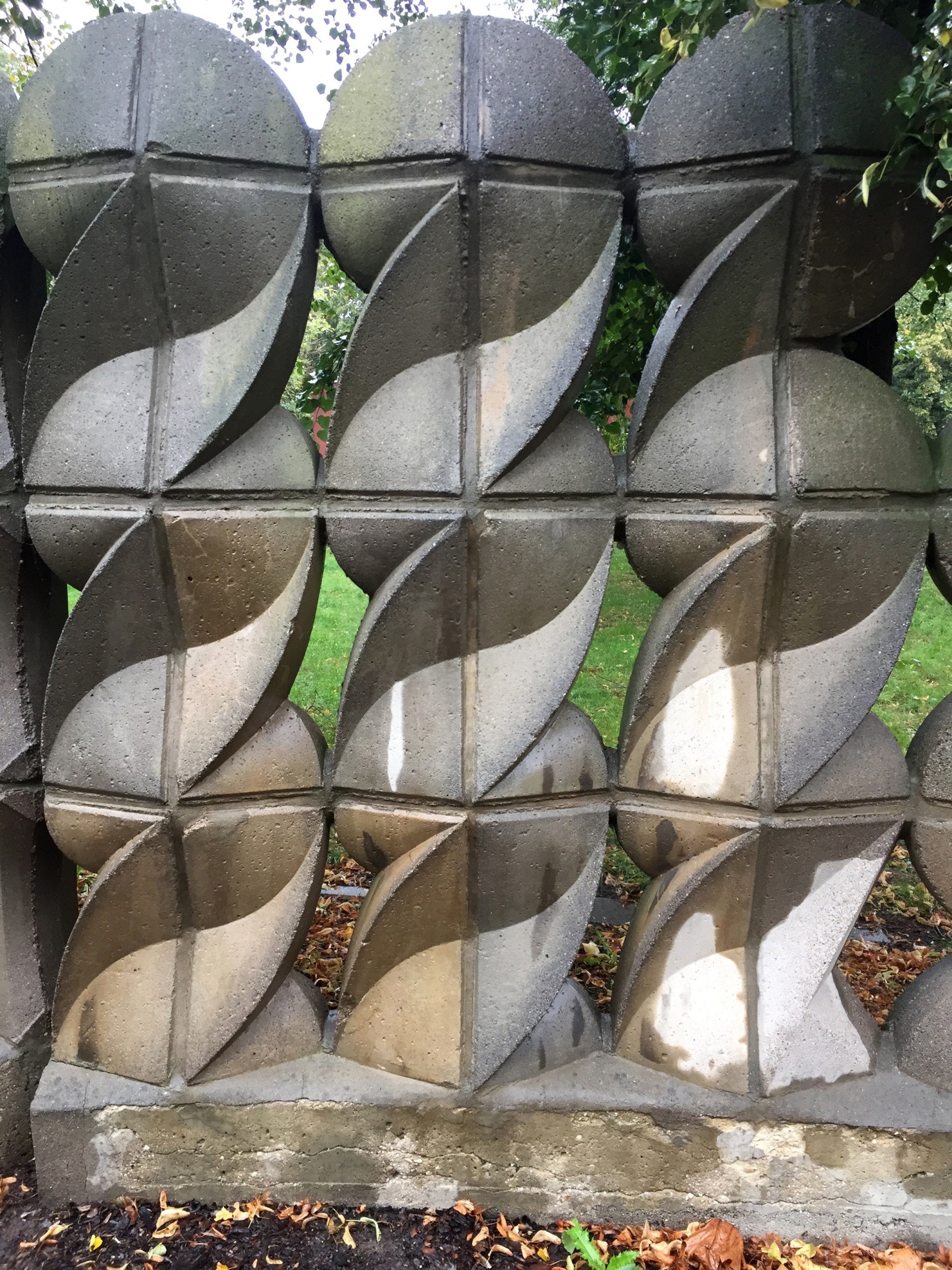 Remarkably often during the break, the conversations were about life in the GDR. All three employees of the workshop had experienced it and it would soon be the feast day of the reunification of Germany. I was actually surprised that this history, which took place as much as thirty years ago, still played such a big role. I noticed it first of all in the skepticism when it came to corona. Now people who have lived in the GDR have every reason to distrust the state, but their distrust went very far and the current government was suspected of having invented the coronavirus itself. 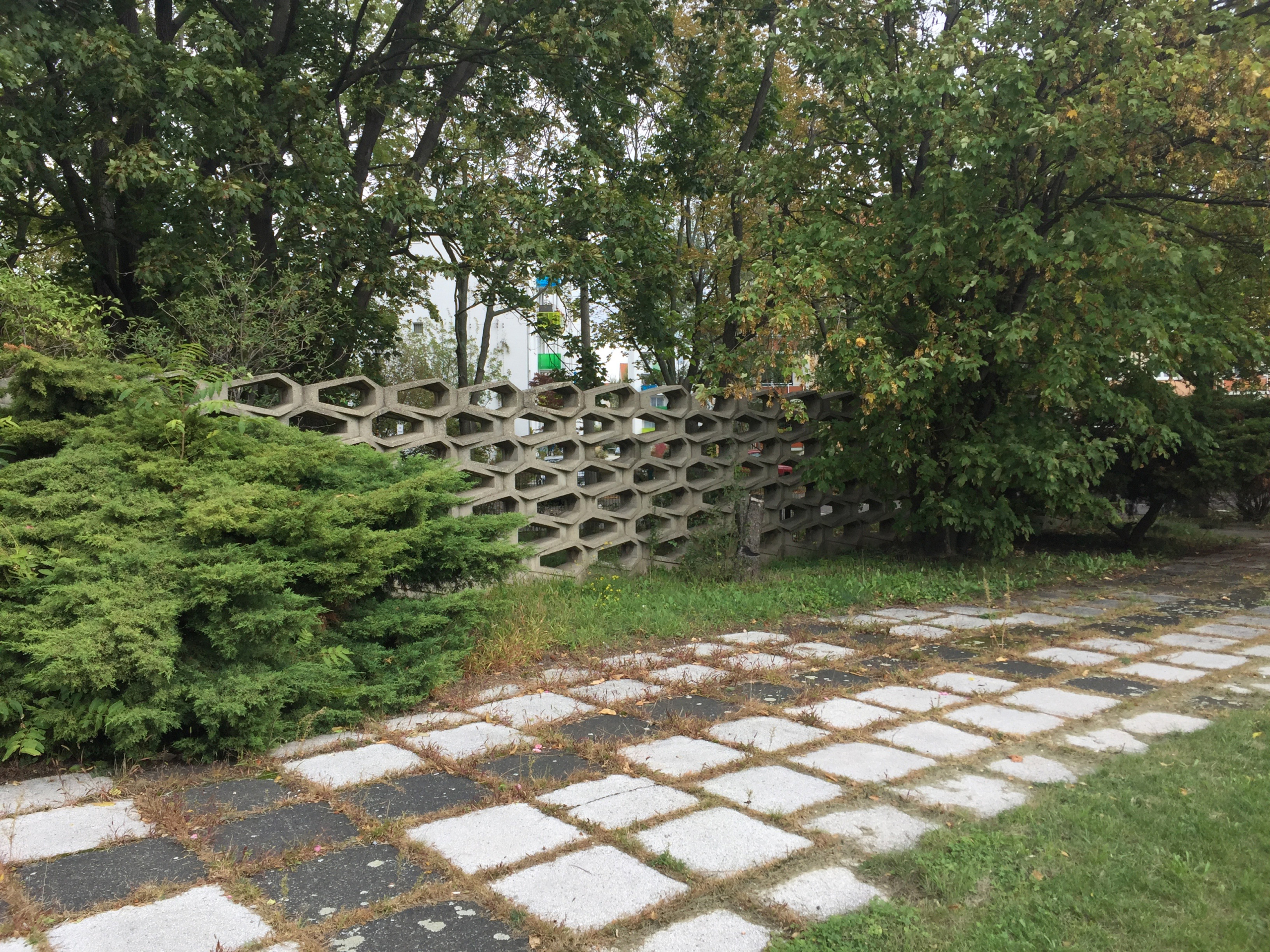 I noticed how there was still disappointment among printers about the transition to a united Germany. After all, nothing was asked of them at the time, they were simply reunited and it had been established for them that freedom was the most important thing, they said, but that was not the case at all: according to them, solidarity was the most important. And it had been destroyed by the Western political system. A lot was possible in the GDR, they said. Punk bands also performed in the basement. In the conversations I felt the disappointment, but also the feeling of inferiority after the fall of the wall. Not everyone was able to cope with the new requirements. And I also felt how the pace in the workshop differed from the pace in my own environment, in Rotterdam. To be honest, I would have liked it now that I was allowed to use the workshop here for a month, if it had remained open longer than until the daily closing at 16 pm.

I still experienced the old-fashioned solidarity, in the form of caring, in Dresden. I sanded with my unwieldy swapbicycle against a curb that I thought I could take square and fell. I was immediately approached from all sides, was offered a patio chair to recover, a bag of ice for my damaged lip, immediately received an address from a nearby dentist and found it very striking how helpful and nice everyone was. When I arrived at the workshop with a fat lip and a slightly damaged tooth, I was told that another artist from the Netherlands had also fallen by bicycle before. The Dutch are used to cycling, but it works differently here. There are many cycle paths, but they also suddenly end: Germany is a car country. 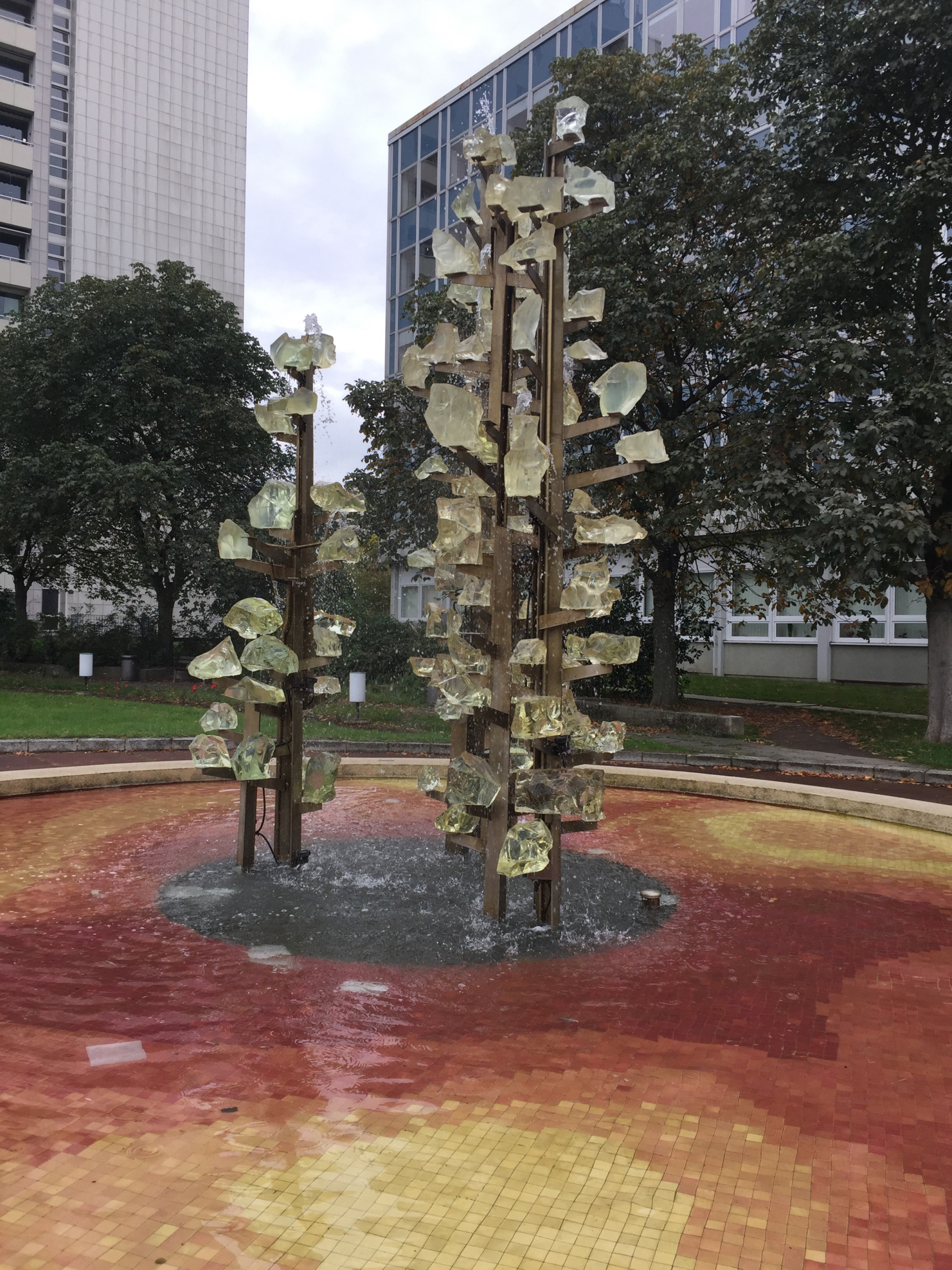 I have been able to work a lot during my month in Dresden and have enjoyed it. A month then quickly passes. I was in the guesthouse with an artist from Strassbourg (Carolin Gamon), we met at the workshop, we sometimes ate together and when we arrived we already had a small exhibition with work that we had brought with us. I got to know a printing technique that I can practice in my studio without needing a workshop. It comes in very handy. I immediately bought a press when I got home. It is a nice addition to my painting. It was only when I got home that I saw the relationship between my work in which I use link forms and the beautiful concrete sculptures that I photographed in Dresden!

The residency in Dresden was made possible in part by CBK Rotterdam and the Goethe-Institut.