De Jasbank is one of the few Hoek monuments of international stature. Architect GW Baas designed the brick monument in 1935 in honor of the legendary Commissioner Jas, one of the most important public figures in the history of Hoek van Holland. In 2006, the monument was moved due to repeated vandalism, with the commemorative plaque on the front being damaged. At the initiative of artist Frank Dam, designer André van Dijk reconstructed the original text plaque. Together with Stadsbeheer and on behalf of BKOR, Dam took on further restoration work from the Jasbank on the edge of the Hoekse Bosjes. In honor of this he produced a one-off edition of the Jaskrant, which was also designed by André van Dijk.

While Heritage Day on Saturday 10 September around 12.00 pm Mayor Aboutaleb will visit the Jasbank, the monument at the Hoekse Bosjes in Hoek van Holland. There he will receive the first copy of the Jaskrant, an initiative of artist Frank Dam in collaboration with designer André van Dijk. During this short meeting, Dam explains the most recent restoration work on the Jasbank and the special historical significance of the monument. Designer Van Dijk then talks about the reconstruction of the typography of the memorial stone.

Architect GW Baas (including the designer of the Chabot Museum) designed the stone monument in 1935 in honor of the legendary Commissioner Jas, one of the most important public figures in the history of Hoek van Holland. Thanks to his efforts, Hoek van Holland has been able to develop from a neglected settlement into a village with amenities such as street lighting, sewerage and new housing. At his initiative, a park with two large forest ponds, the Hoekse Bosjes, which are popularly known as the 'Bosjes van Jas', was also created as part of the job creation scheme.

The original text plaque is characterized by a special typography inspired by the style of the Amsterdam School, from which the stonemason/typographer of the time took over some existing forms and constructed the rest according to his own insight. 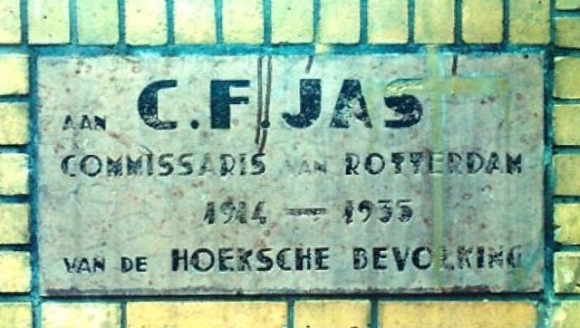 GW Baas (1897-1977) designed the Jasbank with a special composition of styles. The vertical and horizontal interplay of lines refers to the modern building of the New Objectivity. The influence of architect Dudok's brick architecture shimmers through it. The color scheme of the Jasbank is inspired by De Stijl. For example, the wall is made of yellow extruded bricks, the floor consists of red tiles and the side walls are made of blue-purple plinth clinkers.

Keep an eye on our website and social media for news about the presentation of this project.

This project is made possible by BKOR, Visual Arts & Public Space Rotterdam and Stadsbeheer, Municipality of Rotterdam. With a contribution from the Droom en Daad Foundation, the further recovery of the Jasbank can be continued.