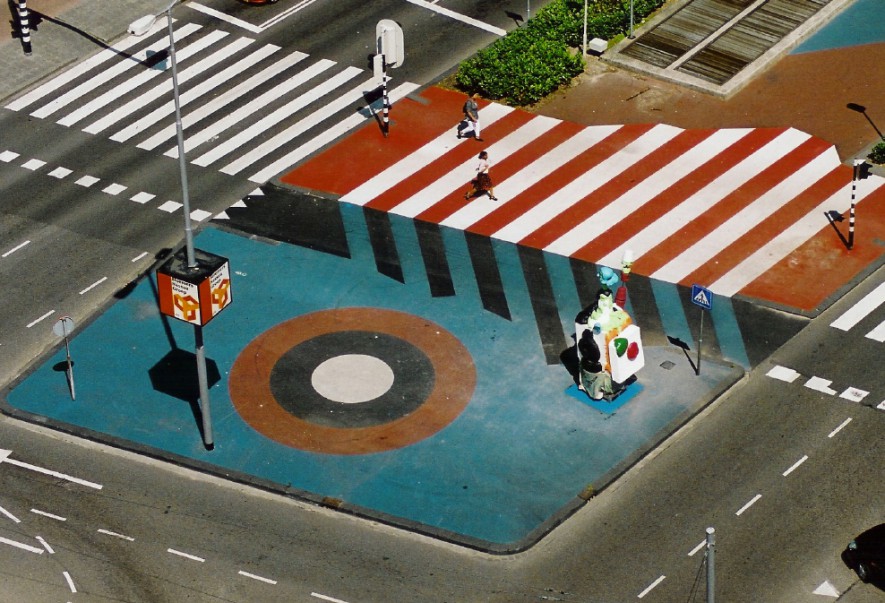 On Friday, April 11, the kick-off of a new program will take place: The Z-Files, art and the city. A program in which art, public space and the city are discussed through lectures, presentations and excursions. This program is compiled by SIR and BKOR, the program components art and the public space of the CBK Rotterdam.

The commotion about the possible relocation of The Destroyed City from Zadkine to the square in front of Rotterdam Central was one of the reasons for creating The Z files (where the Z stands for Zadkine). The subject at the kick-off on April 11 in TENT is "The Great Anita Controversy," following the recovery and relocation of the image Anita from David Bade on the Eendrachtsplein.

The Great Anita Controversy
Anita was damaged by a car last June. Anita turned out to be the most controversial work of art in Rotterdam since she got her place at Eendrachtsplein in 2001. The image has fiery fans and fierce opponents. This became clear again after the car accident: Bade received mail via Facebook and Twitter from people who hoped Anita would disappear from the streets forever. In the meantime, the damage has been repaired and the statue will be placed back on its old location on 11 April, in the middle of the busy intersection of Blaak and Eendrachtsplein. A strange but perfect place for this work of art: a burlap bag filled with debris as a skirt and base and a female figure, built from lumps of pure foam and polyester.

Art historian and journalist Hans den Hartog Jager about Anita: “When a Venus rises from a shell and Jesus Christ from a grave, David Bade's Anita rises from a jute debris bag. It is standing there like a hang-boy, casually thrown down on the crossing on the Blaak. You can even say that Anita proclaims the message of freedom, but in full irony: it says that you should never be bothered about anything, that freedom is the highest good ”.

David Bade
David Bade founded the Instituto Buena Bista with Tirzo Martha and Nancy Hoffmann in 2006 in Curaçao, a pre-academy for talented Curaçao youth. Here they receive lessons from Bade and Martha and from artists-in-residence. Bade also uses art to achieve socialization and awareness through joint projects, from which a work of art does not necessarily have to come from. This is an inseparable part of Bade's artistry.

Program
16.45 hour: relocation of Anita by Rotterdam Public Works in the presence of David Bade. Then walking to TENT for the continuation of The Great Anita Controversy
17.45-18.00 hour: refreshments and a glass in TENT Rotterdam (Witte de Withstraat 50)
18.15: start program led by Walter Barth, then short readings by Ben Zegers (visual artist), Pieter Vos (graphic designer), Yasmijn Jarram (writer and curator), followed by a panel discussion about the discord around Anita.

The Z-files, art and the city is a program of Sculpture International Rotterdam and BKOR (part of the Center for Visual Arts Rotterdam) in which art, public space and the city are discussed through lectures, presentations and excursions. The aim of the program is to bring attention to the special collection of artworks in the public space of Rotterdam and to highlight current developments in the city.

Z-Files newspaper #2 Z-Files newspaper #2, Art and the City. Can also be read online
Z-FILES #13 Louis van Roode Z-Files #13 on Thursday 29 October in the foyer of the Rotterdamse Schouwburg.
Z-Files #12 Art and the City, Free Looking ahead, visions and some flashbacks from Art and the City
Z-Files #11: Street Art - Now & Beyond The 11e edition of the Z-Files is about Street Art.
Z-Files # 10: 1989 - John Körmeling On 16 April, SIR celebrates the return of work 1989 op Zuid with a Z-Files over and with John Körmeling.
Z-Files #8: Looking For Europe In the 8e edition of the Z-Files on Thursday 29 January, BKOR and WORM go 'Looking For Europe' in a talk show with films and guests.
Z-Files #7: Apples from Kees Franse The 11e Z-Files takes place on December 7, following the recently renewed 'Appels' by Kees Franse.
The first Z-Files newspaper is out! The first edition of the Z-Files newspaper appeared in September 2014.
Z-Files # 6: Breytenbach and Lucebert In response to renovated works by Breytenbach and Lucebert, Ernest van der Kwast talks to Breytenbach and Kamargurka
Z-Files # 5: Erik van Lieshout This edition of Z-Files revolves around the work of artist Erik van Lieshout, and his relationship with Rotterdam South.
Z-Files # 4: The Individual Parallel - Bilderberg Utopia by Willem Oorebeek Unveiling of new work in the SIR collection of visual artist Willem Oorebeek preceded by a mini-symposium.