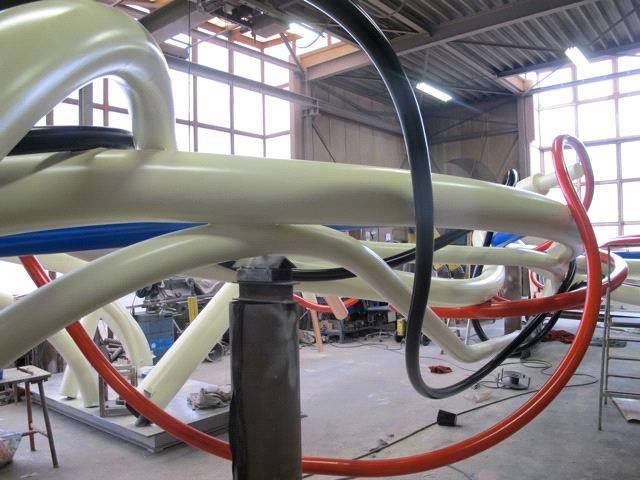 Marcel Kronenburg's IT in Brainpark III
or: the last Rotterdam work of art within the framework of the percentage scheme

On Thursday 26 June the 3e edition of Z-Files, Art and the City will take place. Marcel Kronenburg's unveiling is included in this program IT in Brainpark III in Rotterdam-Oost central. A new work of art is worth a party, but we also commemorate the end of the percentage scheme with IT. With IT closes an era that began in 1960. This edition of Z-Files takes place at KMPG on the Fascinatio Boulevard 200 in Brainpark III, starting at 15.00 hour.

Z-Files looks back on an era
IT was realized within the framework of the so-called percentage scheme, a regulation that was introduced in 1960 in Rotterdam. Approximately one percent of the construction sum or the land exploitation budget could be used for art in public spaces. Thanks to that regulation, the municipality was able to realize an impressive series of artworks. Based on this scheme, the decision was already taken in 1989 to add art to the Brainpark III office park in Rotterdam East. The scheme was abolished in 2005 because the retreating government no longer saw any role in the realization of public works of art.

During the afternoon program, Wijnand Galema, architecture historian, will give a short lecture on the old role of the government as guardian of the arts, on the changes that took place with the end of the 20e century, and on the challenges of the 21e century: is it bad that the government is reflecting on its educational and artistic duties? Should we regret or applaud the loss of the percentage scheme? The unveiling of IT it is used to look back once more on the 1960-2005 period, when the percentage regulation was still current - not nostalgic or frustrated, but with an open mind.

Arts plan for a new Brainpark / Fascinatio neighborhood
Designer Jan Konings was commissioned by the Center for Visual Arts Rotterdam to establish a connection with art between the Fascinatio district and the adjacent business park Brainpark III. This resulted in the vision art as an infill attraction. Based on that concept, a series of art commissions was formulated for Fascinatio in Capelle aan den IJssel and Brainpark III in Rotterdam. In addition to Kronenburg, three more artists were commissioned to create a work of art: Diederik Klomberg (The sundial, Solisplein), Onno Poiesz (Fragments, Solislaan) and Stanislaw Lewkowicz (Eenonely hoek, Ardalaan / Flatuslaan). Jan Konings explains in the afternoon program what an infil attraction is and how we should understand the four artworks.

Marcel Kronenburg's IT: the final piece of Brainpark / Fascinatio
Marcel Kronenburg was inspired by the DC Comic Swamp Thing - a popular series in the super hero genre. According to Kronenburg, the office park for high-quality services lends itself perfectly to the IT image: the depiction of indomitable information technology. In the spring of 2014, IT was placed in the water on the Bahialaan. In a conversation with Tanja Karreman (art historian and director New Dakota), Marcel Kronenburg explains the background of his artwork on 26 June.

Read the article 'Art as an undeniable link in public space' (Kaat, summer 2010)

The Z-Files
Marcel Kronenburg's IT in Brainpark III
(or: the last Rotterdam work of art under the percentage scheme)
Address: Fascinatio Boulevard 200
Start: 15.00 hour

Thanks to KPMG who will be hosting this afternoon

Z-Files newspaper #2 Z-Files newspaper #2, Art and the City. Can also be read online
Z-FILES #13 Louis van Roode Z-Files #13 on Thursday 29 October in the foyer of the Rotterdamse Schouwburg.
Z-Files #12 Art and the City, Free Looking ahead, visions and some flashbacks from Art and the City
Z-Files #11: Street Art - Now & Beyond The 11e edition of the Z-Files is about Street Art.
Z-Files # 10: 1989 - John Körmeling On 16 April, SIR celebrates the return of work 1989 op Zuid with a Z-Files over and with John Körmeling.
Z-Files #9: It's Never Too Late to Say Sorry at Art Rotterdam Sculpture International Rotterdam presents during Art Rotterdam: Z-Files #9: It's Never Too Late To Say Sorry
Z-Files #8: Looking For Europe In the 8e edition of the Z-Files on Thursday 29 January, BKOR and WORM go 'Looking For Europe' in a talk show with films and guests.
Z-Files #7: Apples from Kees Franse The 11e Z-Files takes place on December 7, following the recently renewed 'Appels' by Kees Franse.
The first Z-Files newspaper is out! The first edition of the Z-Files newspaper appeared in September 2014.
Z-Files # 6: Breytenbach and Lucebert In response to renovated works by Breytenbach and Lucebert, Ernest van der Kwast talks to Breytenbach and Kamargurka
Z-Files # 5: Erik van Lieshout This edition of Z-Files revolves around the work of artist Erik van Lieshout, and his relationship with Rotterdam South.
Z-Files # 4: The Individual Parallel - Bilderberg Utopia by Willem Oorebeek Unveiling of new work in the SIR collection of visual artist Willem Oorebeek preceded by a mini-symposium.