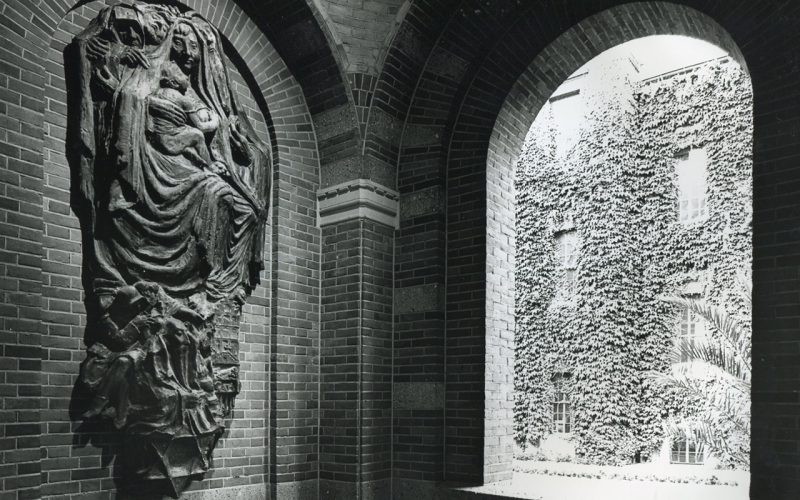 Z-Files #20: Loeki Metz and the Jewish Monument in Rotterdam

De 20th edition of the series Z-Files, Art and the City is organized by CBK Rotterdam in collaboration with Stichting Loods 24 and Joods Kindermonument. Here is the first copy of the publication Loeki Metz and the Jewish Monument in Rotterdam van Siebe Thissen presented by Mayor Aboutaleb to Serge Metz, the son of Loeki Metz. The almost 400-year history of the Jewish community in Rotterdam is also explained in conversations and singing by Ken Gould. The monument to Loeki Metz can be viewed prior to the presentation.

On 20 September 2017 it was exactly 50 years ago that it Jewish Monument was produced by Loeki Metz. The monument was the first reminder of Jewish victims of the Shoah in Rotterdam and concerned a gift from 'Committee of Honor of Debt to Jewish Townspeople' that offered apologies to the Jewish community. In his essay Loeki Metz and the Jewish Monument in Rotterdam Siebe Thissen describes the difficult realization of the monument, which he calls illustrative of the equally difficult way in which Rotterdam (and the Netherlands) dealt with returned Jews after the war. In this area of ​​tension, the perseverance of the sculptor Loeki Metz commands admiration.

15.45-17.00 hours
Subsequently, the Z-Files presented by Melanie Post-Van Ophem (former chairman of the Historisch Genootschap Roterodamum and the Rotterdam Council for Art and Culture). She talks to various guests about the Jewish past of Rotterdam, about Loeki Metz, and about the creation of the monument. The guests are Paul van de Laar, historian and director of Museum Rotterdam; Frank van Gelderen, secretary of Loods 24 Foundation and Jewish Children's Monument; Rob Snijders, historian and founder of the Jewish Heritage Rotterdam website; Siebe Thissen, head of BKOR and author of Loeki Metz and the Jewish Monument in Rotterdam en Serge Metz, the son of Loeki Metz. He will receive the first copy of the book. The handover is done by Mayor Aboutaleb, who also wrote the preface to this essay.

Follow-up program: Stumbling Stones ('Stumbling Stones') Rozenburglaan
17.30-18.00 hours
After the presentation there is the possibility of laying Stumbling Stones to attend the Rozenburglaan in Kralingen. Here lived the grandparents of Job Cohen, killed by the Nazis. The 'stumbling stones' are placed in the presence of Ahmed Aboutaleb en Job Cohen. Job Cohen will also be the special guest Z-Files attend the town hall. Stumbling Stones is a unique project by the German artist Gunter Demnig. Its bronze stones throughout Europe mark the homes of people who were expelled, deported, murdered or committed to suicide during the Second World War. Since 2010, almost 24 stones have been placed in Rotterdam on the initiative of Stichting Loods 300 and the Jewish Children's Monument.

Z-Files, Art and the City
The CBK Rotterdam programs BKOR en Sculpture International Rotterdam collaborate intensively to strengthen and renew the Rotterdam public space. They organize regularly Z-Files about art and the city in which art, public space and the city are addressed through lectures, presentations and excursions. Goal of Z-Files (where the Z stands for The destroyed city from Zadkine and the controversy surrounding the possible relocation of this work) is to bring attention to the special collection of works of art in the public space of Rotterdam and to highlight current developments in the city.

Work Loeki Metz restored The untitled work is being restored by Vincent Petit.