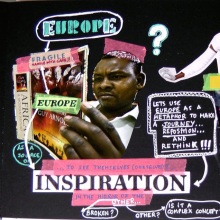 On Thursday 29 January 2015, Z-Files # 8 goes looking for Europe. Has Europe become an old, aging world that can no longer follow the pace of globalization? Is Europe merely a Jewish-Christian stronghold that must guard itself against external influences? Or are we just not looking well? According to the French philosopher Edgar Morin, Europe exists by the grace of the conflict: between social classes, states, religions and ideas. 'Europe' as a dynamic complex, in which the center is constantly shifting: new conflicts arise every time Europe thinks it is realized. Or should we look for answers outside of Europe, as Frantz Fanon already noted in 1961. The Berlin exhibition and research project In Search of Europe? tends towards the last option: the most important thing about Europe was its imperial power over other parts of the world, which had to compete with Europe. Europe's exceptional position has now come to an end.

In WORM, Ernest van der Kwast talks to a number of guests about Europe. Artist Daniela Swarowsky presents her film Messages From Paradise #2 (2014), in which Dutch people of Moroccan descent and Moroccans in the Rif area talk about their perspectives. Together with Samuli Schielke she made the exhibition In Search Of Europe? (ISOE) in Berlin. This event took place at the Kunstraum Kreuzberg / Bethanien and was funded by the German Ministry of Education and Research (BMBF). The artist collective Bofa da Cara made the short film in the context of ISOE My European Mind / RE-branding Europe. And the Rotterdam historian Zihni Özdil gives his own vision of Europe in a guest column. How is Europe doing?

Trailer Messages from Paradise #2 Information about and the trailer of My European Mind / Re-branding Europe from Bofa da Cara Starting: from 19: 30 In collaboration with WORM LOOKING FOR EUROPE is also part of EURO-FUTURISM, a program in which WORM examines the future of Europe.

Z-Files, Art and the City

Z-Files is a series of programs from Sculpture International Rotterdam and Visual Art & Public Space in which art, public space and the city are discussed through lectures, workshops and excursions. The aim of the program is to bring attention to the special collection of artworks in the public space of Rotterdam and to investigate current developments with regard to art and the city.

Z-Files newspaper #2 Z-Files newspaper #2, Art and the City. Can also be read online
Z-FILES #13 Louis van Roode Z-Files #13 on Thursday 29 October in the foyer of the Rotterdamse Schouwburg.
Z-Files #12 Art and the City, Free Looking ahead, visions and some flashbacks from Art and the City
Z-Files #11: Street Art - Now & Beyond The 11e edition of the Z-Files is about Street Art.
Z-Files # 10: 1989 - John Körmeling On 16 April, SIR celebrates the return of work 1989 op Zuid with a Z-Files over and with John Körmeling.
Z-Files #9: It's Never Too Late to Say Sorry at Art Rotterdam Sculpture International Rotterdam presents during Art Rotterdam: Z-Files #9: It's Never Too Late To Say Sorry
Z-Files #7: Apples from Kees Franse The 11e Z-Files takes place on December 7, following the recently renewed 'Appels' by Kees Franse.
The first Z-Files newspaper is out! The first edition of the Z-Files newspaper appeared in September 2014.
Z-Files # 6: Breytenbach and Lucebert In response to renovated works by Breytenbach and Lucebert, Ernest van der Kwast talks to Breytenbach and Kamargurka
Z-Files # 5: Erik van Lieshout This edition of Z-Files revolves around the work of artist Erik van Lieshout, and his relationship with Rotterdam South.
Z-Files # 4: The Individual Parallel - Bilderberg Utopia by Willem Oorebeek Unveiling of new work in the SIR collection of visual artist Willem Oorebeek preceded by a mini-symposium.