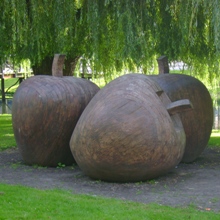 On Thursday 11 December, Visual Arts & Public Space (BKOR) is organizing the seventh edition of the Z Files: Art and the city. This edition is dedicated to Rotterdam artist Kees Franse (1924-1982).

About the artist
Kees Franse (Oud Beijerland, 1924 - 1982) specialized mainly in painting, was the founder of the Argus painting group, but also made work for the public space, including a colored concrete relief above the entrance to the current Rotterdam City Archives (1962). He had a special interest in apples, of which he made huge wooden sculptures. His 'apples' can be found in Gorinchem, Amsterdam, Arnhem and Leiden, among others. His 'Schiphol apple', made in 1975, is famous on which thousands of travelers left their names and messages over the years, and which at that time served as a meeting point.

French made the first apples at 1973 in Rotterdam. For the Heemraadssingel, where he also had his home and studio, he made four apples made from Kambala wood. The work was the only purchase from the municipal Images Committee in the City. After his unveiling, the group of statues was quickly closed down by city dwellers.

Restoration
After forty years, however, the images were subject to rotting, and the wood had to be replaced. Thanks to the efforts of the Visual Arts & Public Space (BKOR) and a grant from the city council, the apples recreated in 2014. In the Restoration Workshop Schiedam, specialized in the restoration of mills, the four were wooden apples completely re-manufactured based on 3D scans.

Program Z-Files # 7
Under the leadership of Mijke Loeven (director of Jazz International Rotterdam and resident of the Heemraadssingel), a number of speakers are heard who know French and his work well, including visual artist Klaas Gubbels; art collector and blogger Joris Veltman; restorer of the Apples Rob Batenburg (Restoration Workshop Schiedam) and art collector and local resident of the Heemraadssingel Alexander Ramselaar.

Two films are also shown, including one by Emile Steginga about the restoration of the Apples, and a film by Thys Ockersen from 1975, in which French shows how he is Apples made. This film is also introduced by Ockersen. Afterwards become the new Apples festively initiated with apple juice and Apfelkorn.

Z-Files newspaper #2 Z-Files newspaper #2, Art and the City. Can also be read online
Z-FILES #13 Louis van Roode Z-Files #13 on Thursday 29 October in the foyer of the Rotterdamse Schouwburg.
Z-Files #12 Art and the City, Free Looking ahead, visions and some flashbacks from Art and the City
Z-Files #11: Street Art - Now & Beyond The 11e edition of the Z-Files is about Street Art.
Z-Files # 10: 1989 - John Körmeling On 16 April, SIR celebrates the return of work 1989 op Zuid with a Z-Files over and with John Körmeling.
Z-Files #9: It's Never Too Late to Say Sorry at Art Rotterdam Sculpture International Rotterdam presents during Art Rotterdam: Z-Files #9: It's Never Too Late To Say Sorry
Z-Files #8: Looking For Europe In the 8e edition of the Z-Files on Thursday 29 January, BKOR and WORM go 'Looking For Europe' in a talk show with films and guests.
The first Z-Files newspaper is out! The first edition of the Z-Files newspaper appeared in September 2014.
Z-Files # 6: Breytenbach and Lucebert In response to renovated works by Breytenbach and Lucebert, Ernest van der Kwast talks to Breytenbach and Kamargurka
Z-Files # 5: Erik van Lieshout This edition of Z-Files revolves around the work of artist Erik van Lieshout, and his relationship with Rotterdam South.
Z-Files # 4: The Individual Parallel - Bilderberg Utopia by Willem Oorebeek Unveiling of new work in the SIR collection of visual artist Willem Oorebeek preceded by a mini-symposium.