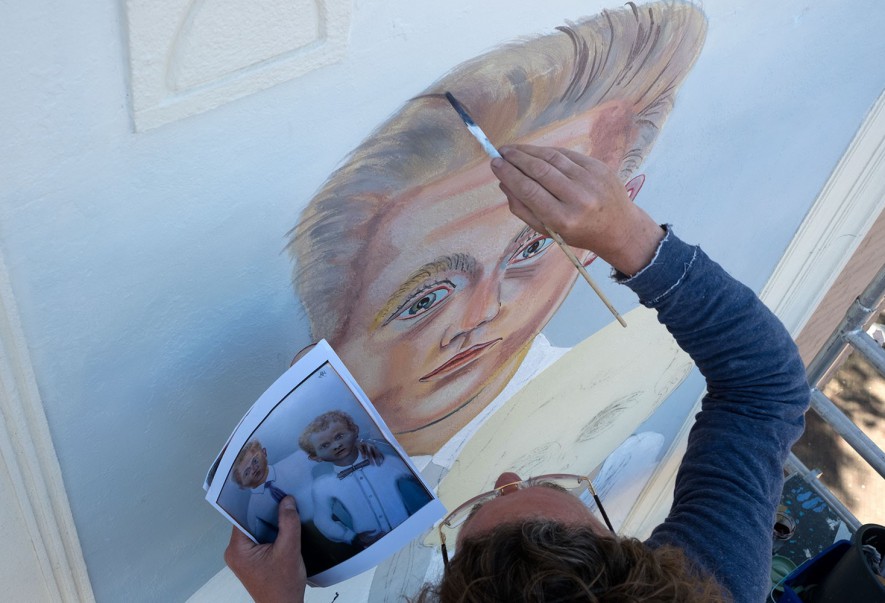 Restoration of a painting by Dolf Henkes in an ornament frame by Advertising Studio Leo Mineur. Photo: Joop Reijngoud

This summer nine ornaments lists with restored and new artworks in the Katendrecht district of Rotterdam will be delivered. The paintings were realized in the project Cape Color from Belvédère Storyhouse and BKOR.

The images are about Katendrecht and the Cape artists and artists. Works by Daan van Golden, Dolf Henkes, Wally Elenbaas, Louis van Roode and portraits by Johnny Hoes and Leo Mineur are included in the selection that was made in consultation with residents. On Friday 25 August Cape Color celebrated with the 19e edition of Z-Files, Art and the City.

Visual artists Wally Elenbaas, Dolf Henkes, Louis van Roode and Daan van Golden all lived at Katendrecht. Not only the presence of artists, but also those of music are inextricably linked to the cultural history of the Cape; think of Johnny Hoes. This colorful cultural history is celebrated this year.
Thanks to the presence of many visual arts - sculptures, murals - the Katendrecht peninsula already has a small outdoor museum. Now there are nine more murals added - some new, others refurbished.

Z-Files, Art and the City #19: Cape Color
De 19e edition of the Z-Files series is a talk show in Verhalenhuis Belvédère. In a public program of one and a half hour, the ornaments lists and the new paintings are further examined and discussed. What do the images mean for Katendrecht, and what does Katendrecht mean for artists and makers of the paintings? Anna Visser presents this Z-Files, which is opened with a few words by alderman Hugo de Jonge (Education, Youth and Care). In interviews with stakeholders and residents and through a column Jan Oudenaarden the rich cultural history of Katendrecht is discussed. The results of the Summer School (the Cape Color educational project for children between 9 and 12 year) presented at Verhalenhuis Belvédère. The Summer School takes place from 7 to 11 August and includes courses in 'XL painting' and 'interviewing'.

About Katendrecht
Katendrecht, popularly known as 'the Cape', has a turbulent history and has regularly been subject to large-scale restructuring. The first change in 1911 was radical and Katendrecht changed from rural village to peninsula between the excavated Maashaven and Rijnhaven. To excavate the ports, houses had to give way, so that many people had to move. Katendrecht then became known for its lively nightlife with red-light district and later for the decline and the impoverishment of the neighborhood. Protests and resistance from residents led to the decision to urban renewal in the middle of the '70. A start was made, but real quality improvement at Katendrecht was only achieved following the Pact on South (2006). An increase in the physical, social and economic quality of the neighborhood due to greening, the renovation of the Deliplein, renovations and the construction of new homes resulted in a large number of new residents. The restructuring of Katendrecht is now at an advanced stage. As a result, the population composition has changed considerably and the diversity has increased. The village character of Katendrecht has been preserved despite all the changes.

The ornaments lists: looking back at the old Katendrecht
De 19ecentury architecture, of which Katendrecht fortunately still has a lot, is decorated with ornaments on the corners of many streets. In the past, these were intended for painted advertisements, but this function was lost due to the arrival of Aries and billboards. From the 80 years onwards, CBK Rotterdam built up a tradition of providing visual art for the surfaces in the Rotterdam ornamental frames. At the end of the 90, Katendrecht also received paintings in the frames of which a small number can still be found today. Others have disappeared due to renovations. Residents, Woonstad Rotterdam and CBK Rotterdam have worked together to repaint the existing frames with murals. Because of the nostalgic character of the Cape, images were chosen that look back on the old Katendrecht in one way or another. Some paintings were restored by Cape artists, others are reproductions of Cape artists who have died in the meantime, and others are about Cape artists.

Z-Files, Art and the City
The CBK Rotterdam programs BKOR en Sculpture International Rotterdam collaborate intensively to strengthen and renew the Rotterdam public space. They organize regularly Z-Files about art and the city in which art, public space and the city are addressed through lectures, presentations and excursions. Goal of Z-Files (where the Z refers to The destroyed city from Ossip Zadkine and the controversy surrounding the possible relocation of this work in 2014) is to bring attention to the special collection of artworks in the public space of Rotterdam and to highlight current developments in the city.

Cape Color is a BKOR project (responsible for art in the public areas of the neighborhoods at CBK Rotterdam). The restorations were carried out by Reclame Atelier Leo Mineur. The peripheral programming of Kaapse Kleur has been developed in collaboration with Verhalenhuis Belvédère.

Z-Files #18 and unveiling Seven Tears: Susan Philipsz On 23 March a Z-Files with Susan Philipsz and the unveiling of her new sound artwork Seven Tears under the Erasmus Bridge.
Z-Files #17: Frans de Wit Visit - including transport, lunch and lecture - to the Windshield Caland Canal (1985) and the Vierkant Eiland in the lake (1996) by Frans de Wit
BKOR BKOR (Visual Arts & Public Space) There is no city in the Netherlands with so much visual art in public space as Rotterdam. BKOR manages and renews the extensive city collection in collaboration with involved Rotterdam residents, companies and institutions. BKOR takes care of the management and maintenance of this collection and archives extensive information about the images.
Z-files XL: the unique art collection of Rotterdam Multi-day event about artworks in the Rotterdam street scene
Z-Files #16: Holes in the wall Holes in the wall is a film about the collaboration between artists and architects in the creation of monumental art in public space during the reconstruction period.
Z-Files #15: Bild, or ...? In Z-Files #15 a lecture by Willem Oorebeek on the occasion of the new SIR edition.
Z-Files #14 and unveiling of the Louis Davids monument A Z-Files following the relocated monument for the Jewish singer Louis Davids.
Z-FILES #13 Louis van Roode Z-Files #13 on Thursday 29 October in the foyer of the Rotterdamse Schouwburg.
Z-Files #12 Art and the City, Free Looking ahead, visions and some flashbacks from Art and the City
Z-Files #11: Street Art - Now & Beyond The 11e edition of the Z-Files is about Street Art.
Z-Files # 10: 1989 - John Körmeling On 16 April, SIR celebrates the return of work 1989 op Zuid with a Z-Files over and with John Körmeling.
Z-Files, Art and the City In the Z-Files art, public space and the city are discussed through lectures, presentations and excursions.
Z-Files #9: It's Never Too Late to Say Sorry at Art Rotterdam Sculpture International Rotterdam presents during Art Rotterdam: Z-Files #9: It's Never Too Late To Say Sorry
Z-Files #8: Looking For Europe In the 8e edition of the Z-Files on Thursday 29 January, BKOR and WORM go 'Looking For Europe' in a talk show with films and guests.
Z-Files #7: Apples from Kees Franse The 11e Z-Files takes place on December 7, following the recently renewed 'Appels' by Kees Franse.
Z-Files # 6: Breytenbach and Lucebert In response to renovated works by Breytenbach and Lucebert, Ernest van der Kwast talks to Breytenbach and Kamargurka
Z-Files # 5: Erik van Lieshout This edition of Z-Files revolves around the work of artist Erik van Lieshout, and his relationship with Rotterdam South.
Z-Files # 4: The Individual Parallel - Bilderberg Utopia by Willem Oorebeek Unveiling of new work in the SIR collection of visual artist Willem Oorebeek preceded by a mini-symposium.