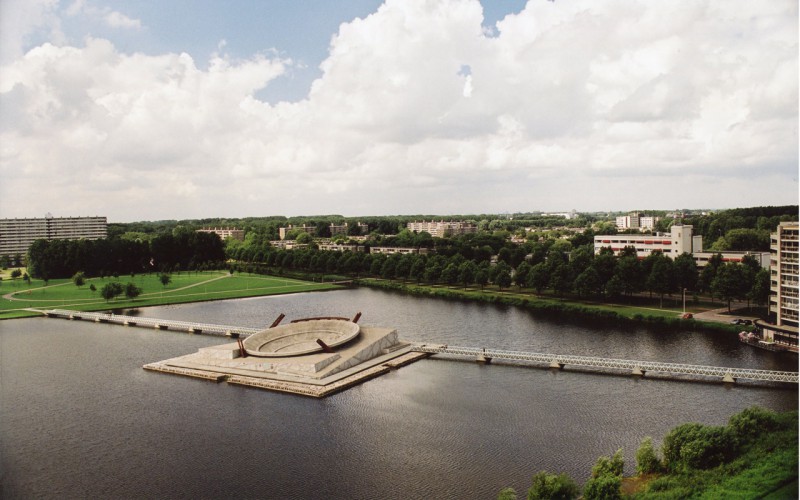 Bus tour and lunch lecture: Thursday, November 3, 12 - 14 hours
Participation is free
You can register via this link

The Windscreen Calandkanaal (1985) and the Square island in the lake (1996) are two monumental works of art, outside the center of Rotterdam. Both artworks were made by artist Frans de Wit (1949-2004) and have been the property of the municipality of Rotterdam since they were created. The works are of great value to the city and to the Dutch history of monumental and landscape art. That is why Sculpture International Rotterdam (SIR) has it Windscreen Calandkanaal and the Square island in the lake included in the SIR collection (also known as the A collection). The collection of SIR is relatively small, so that more attention can be given to maintenance, research and knowledge transfer about these works of art.

Z-Files #17: Frans de Wit
To celebrate these special acquisitions for the collection, SIR is organizing a new edition of the Z-Files on November 3: Tells in a special lunch bus tour Ad Koolen landscape architect and expert on the work of Frans de Wit, about the artist and these two works. Both artworks will be visited this afternoon. At the Windshield on the Caland Canal, former municipal architect tells Maarten Struijs from beginning to end the story of this colossal concrete engineering artwork, which he designed in collaboration with Frans de Wit.

Square island in the lake in Rotterdam Prinsenland (1992-1996) is placed on the historic lowest point of the Netherlands, more than 7 meters below NAP and is an artificial island of 52 × 52 meters. The work consists of a deep concrete bowl with a diameter of 28,5 meters, with rising beams on a square base. The island is connected to the shores with two bridge sections. Within the architecture, the square island represents the classical, architectural task of moving from square to circle.

Windscreen Calandkanaal
A windshield was constructed between 1983 and 1985 along the Calandkanaal in Rotterdam-Europoort near the Calandbrug, to make shipping possible even with a wind force higher than 5. The screen is almost 2 kilometers long and consists of semicircular concrete elements of 25 meters height.

About Frans de Wit
Frans de Wit, sculptor and landscape artist and maker of the three largest works of art in the Netherlands. Franciscus Theodorus Alexandros de Wit (1942-2004) studied from 1960 to 1965 at the Royal Academy of Visual Arts in The Hague and was part of the so-called Hague School. "Frans de Wit was one of the best Dutch sculptors of his generation, together with Carel Visser, David van de Kop, Cornelius Rogge and Lon Pennock. He built an impressive oeuvre, in which commissions for images in the public space played a major role. For Frans de Wit, the place was the starting point for such images. The dimensions ensure that the artworks are in balance with people, nature and environment. De Wit chose a variety of materials. Characteristic for him is that he processed the materials with his own hands - and with self-designed tools. This editing largely determined the image, it grew during the creation process. Such projects sometimes took years.'
- Jetteke Bolten Rempt

Sculpture International Rotterdam Sculpture International Rotterdam (SIR) Sculpture International Rotterdam is involved in the management and renewal of a unique international image collection of more than 50 public works of art on the so-called main lines of the city. In addition, SIR annually establishes an extensive activity program with performances, films, temporary sculptures and research in the field of art
BKOR BKOR (Visual Arts & Public Space) There is no city in the Netherlands with so much visual art in public space as Rotterdam. BKOR manages and renews the extensive city collection in collaboration with involved Rotterdam residents, companies and institutions. BKOR takes care of the management and maintenance of this collection and archives extensive information about the images.
Z-files XL: the unique art collection of Rotterdam Multi-day event about artworks in the Rotterdam street scene
Z-Files #16: Holes in the wall Holes in the wall is a film about the collaboration between artists and architects in the creation of monumental art in public space during the reconstruction period.
Z-Files #15: Bild, or ...? In Z-Files #15 a lecture by Willem Oorebeek on the occasion of the new SIR edition.
Z-Files #14 and unveiling of the Louis Davids monument A Z-Files following the relocated monument for the Jewish singer Louis Davids.
Z-FILES #13 Louis van Roode Z-Files #13 on Thursday 29 October in the foyer of the Rotterdamse Schouwburg.
Z-Files #12 Art and the City, Free Looking ahead, visions and some flashbacks from Art and the City
Z-Files #11: Street Art - Now & Beyond The 11e edition of the Z-Files is about Street Art.
Z-Files # 10: 1989 - John Körmeling On 16 April, SIR celebrates the return of work 1989 op Zuid with a Z-Files over and with John Körmeling.
Z-Files, Art and the City In the Z-Files art, public space and the city are discussed through lectures, presentations and excursions.
Z-Files #9: It's Never Too Late to Say Sorry at Art Rotterdam Sculpture International Rotterdam presents during Art Rotterdam: Z-Files #9: It's Never Too Late To Say Sorry
Z-Files #8: Looking For Europe In the 8e edition of the Z-Files on Thursday 29 January, BKOR and WORM go 'Looking For Europe' in a talk show with films and guests.
Z-Files #7: Apples from Kees Franse The 11e Z-Files takes place on December 7, following the recently renewed 'Appels' by Kees Franse.
Z-Files # 6: Breytenbach and Lucebert In response to renovated works by Breytenbach and Lucebert, Ernest van der Kwast talks to Breytenbach and Kamargurka
Z-Files # 5: Erik van Lieshout This edition of Z-Files revolves around the work of artist Erik van Lieshout, and his relationship with Rotterdam South.
Z-Files # 4: The Individual Parallel - Bilderberg Utopia by Willem Oorebeek Unveiling of new work in the SIR collection of visual artist Willem Oorebeek preceded by a mini-symposium.