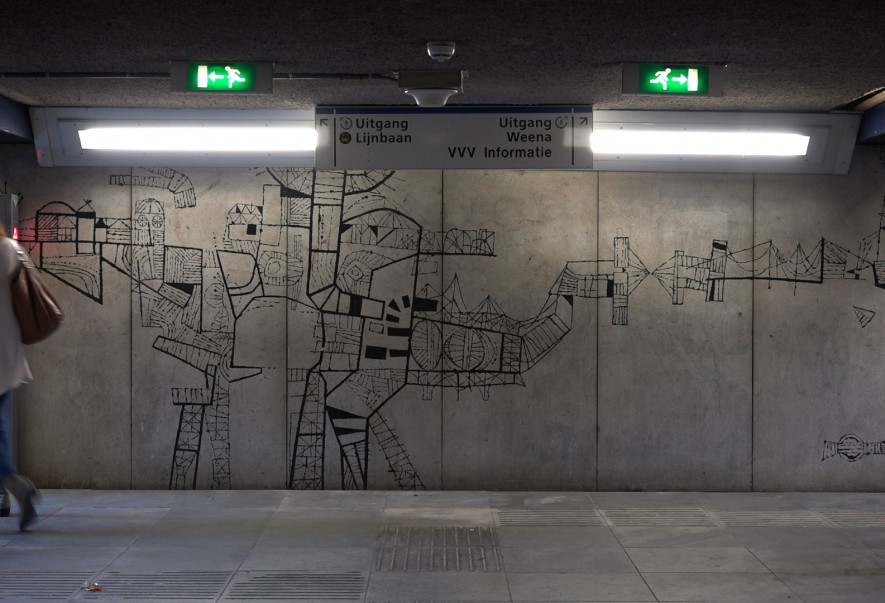 Wholesale building, at the top The stairs.
Start: 15: 45 hour
Free tickets can be reserved via the following link

BKOR (CBK Rotterdam) proudly presents the film in collaboration with the AFFR on Saturday 4 June Holes in the wall by Jan Dirk Schouten, in the 16e edition of the Z-Filesseries. The film is about the special collaboration between artists and architects in the reconstruction period. The premiere of this film takes place at a unique location, namely in Kriterion Rotterdam, the pop-up film house at the top of the Groothandelsgebouw.

"The stairs are therefore not only there to rise, but especially to enjoy the view. This is possible on top of the Groothandelsgebouw, which is temporarily set up as a lookout post over the city. There, the former Kriterion cinema will also be opened temporarily for a varied selection of films, debates and shows. ”
From 4 June to 8 June there is a film five days. The premiere of Holes in the wall takes place on the first day. First walk into the building and turn right, then take another small staircase to the auditorium.

Program Z-Files #16
Z-Files #16 starts with a conversation between Jord den Hollander (architect, filmmaker and founder of the AFFR) and the maker of the film, Jan Dirk Schouten (architect, Schouten Architects). Then the film Holes in the wall shown, this takes 100 minutes.

About Holes in the wall
After the war, in the years of frugality, housing shortage, lack of resources and raw materials, artists again searched for a unity in art and architecture. It was a flourishing time, with new collaborations between artists and architects. In the 60 years, they became disappointed and the search for unity was preferred. In the movie Holes in the wall (100 minutes), six places in Rotterdam tell the forgotten stories of artists and architects who together strived for a better world. Gate in the wall also pays attention to the question why we have such a difficult relationship with our recent past.

The film was made financially possible by the Creative Industries Fund NL, the municipality of Rotterdam and CBK Rotterdam

Z-Files, Art and the city
The CBK Rotterdam programs BKOR and Sculpture International Rotterdam work together intensively to strengthen and renew the Rotterdam public space. For example, they regularly organize Z-Files (with the Z from Zadkine) about art and the city in which art, public space and the city are addressed through lectures, presentations and excursions. The aim of the program is to bring attention to the special collection of artworks in the public space of Rotterdam and to highlight current developments in the city.

This program is part of Rotterdam is celebrating the city!

Z-files XL: the unique art collection of Rotterdam Multi-day event about artworks in the Rotterdam street scene
Z-Files #15: Bild, or ...? In Z-Files #15 a lecture by Willem Oorebeek on the occasion of the new SIR edition.
Z-Files #14 and unveiling of the Louis Davids monument A Z-Files following the relocated monument for the Jewish singer Louis Davids.
Z-Files newspaper #2 Z-Files newspaper #2, Art and the City. Can also be read online
Z-FILES #13 Louis van Roode Z-Files #13 on Thursday 29 October in the foyer of the Rotterdamse Schouwburg.
Z-Files #12 Art and the City, Free Looking ahead, visions and some flashbacks from Art and the City
CBK Rotterdam Celebrates Art and the City Under the name Rotterdam Celebrates The City! events take place throughout Rotterdam at the initiative of Rotterdam Festivals that celebrate the completion of 75 years of reconstruction, and thus look ahead to the future of our city. CBK Rotterdam is celebrating along with a large indoor exhibition, a pop-up outdoor exhibition, a new book about the visual history of Rotterdam, an XL episode
Z-Files #11: Street Art - Now & Beyond The 11e edition of the Z-Files is about Street Art.
Z-Files # 10: 1989 - John Körmeling On 16 April, SIR celebrates the return of work 1989 op Zuid with a Z-Files over and with John Körmeling.
Z-Files, Art and the City In the Z-Files art, public space and the city are discussed through lectures, presentations and excursions.
Z-Files #9: It's Never Too Late to Say Sorry at Art Rotterdam Sculpture International Rotterdam presents during Art Rotterdam: Z-Files #9: It's Never Too Late To Say Sorry
Z-Files #8: Looking For Europe In the 8e edition of the Z-Files on Thursday 29 January, BKOR and WORM go 'Looking For Europe' in a talk show with films and guests.
Z-Files #7: Apples from Kees Franse The 11e Z-Files takes place on December 7, following the recently renewed 'Appels' by Kees Franse.
Z-Files # 6: Breytenbach and Lucebert In response to renovated works by Breytenbach and Lucebert, Ernest van der Kwast talks to Breytenbach and Kamargurka
Z-Files # 5: Erik van Lieshout This edition of Z-Files revolves around the work of artist Erik van Lieshout, and his relationship with Rotterdam South.
Z-Files # 4: The Individual Parallel - Bilderberg Utopia by Willem Oorebeek Unveiling of new work in the SIR collection of visual artist Willem Oorebeek preceded by a mini-symposium.