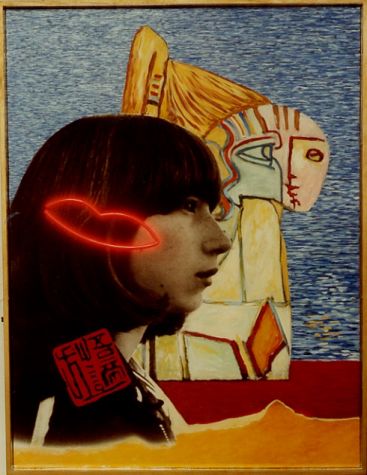 Woody van Amen en Hidde van Schie present new and existing work in an exhibition in which the capacity of art to touch people is central. Paintings on which birds cry inconsolable, enthusiastically flashing light sculptures, magical tax symbols and serene neon paintings bring an ode to art that wants to give a new, romantic impulse to the relationship between the artwork and the viewer. Beyond irony and cynicism, the two artists create space for emotions, for sentiment, as a self-reflective pursuit or desire for something that transcends banal reality.

Brought in nearly fifty years Woody van Amen (1936) a sensational and multifaceted oeuvre, including painting, sculpture, installations and film. In the mid-sixties, Van Amen broke through as the foreman of a major international art movement in the Netherlands at the 'New Realists' exhibition in the Gemeentemuseum in The Hague. Just back from New York and working in a style in which he brought together appealing icons from the consumer society and popular visual culture, he became the representative of Dutch Pop Art in one fell swoop. From the 1970s, he traveled extensively in Asia and Indonesia. The way in which he has since combined his interest in 'low culture' - from advertising to film to comics - with notions about identity and spirituality is groundbreaking.

Hidde van Schie (1978) makes music, writes texts, makes collages and installations, and is best known as a painter. He is also a versatile musician; on his recent album The Mirror & The Razorblade / Dusty Diamond Eyes, he sings and also plays guitar and organ. In Van Schie's work, there is no difference between 'high' and 'low' art: both matter, 'as long as it touches you', as he says. His compositions of jungles and birds are smoothly painted, set up virtuoso, often referring to famous motifs in art. He assembles all kinds of materials in his sculptures and collages; whether it is magazine photos, texts or parts of musical instruments: a drum set, speakers and guitars. Van Schie graduated cum laude in 2001 from the Willem de Kooning Academy in Rotterdam.

A publication (design 75B) will accompany the exhibition. With texts by Noor Mertens, city curator of Museum Boijmans van Beuningen and published by Nai010.

The festive opening of the exhibitions takes place on Thursday 5 February at 20.00 o'clock. On Friday, February 6 is TENT open until 21.00 hours during the Kunstavond.

An Evening With… Woody van Amen and Hidde van Schie speak with art critic and writer Hans den Hartog Jager about their work.