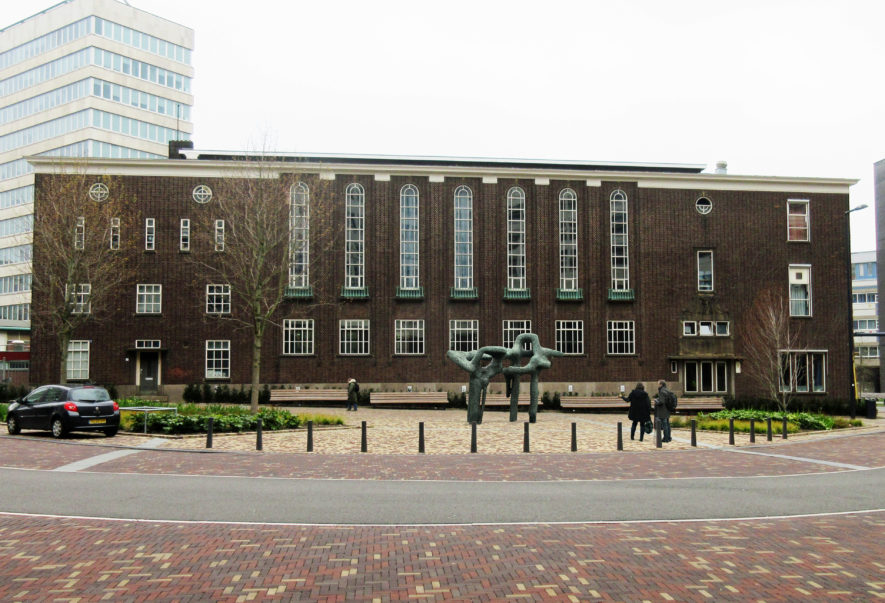 The bronze statue will be on November 27 Clouds van Gust Romijn (1922-2010) festively unveiled by councilor Buitenruimte Bert Wijbenga at the Dr. Molewaterplein in Rotterdam. The work was made in 1965 and donated to the Daniel den Hoed clinic by the NV Flour factories of the Dutch Bakery ('Meneba') on the occasion of the 50 anniversary of the company. With the recent move from the clinic to Erasmus MC, it was decided to move the statue along. The completion of the public space around the Erasmus MC will also be celebrated on this day.

The work originally marked the entrance to the clinic on the Groene Hilledijk. After the building was expanded, it was moved to the nearby Valkeniersweide, which included the work in the Rotterdam city collection. With the recent relocation of the Daniël den Hoed clinic to the Erasmus MC, it was decided to move the statue along. Clouds will be placed opposite the new main entrance of the Erasmus MC, on the square in front of the Erasmiaans Gymnasium. The renovated and award-winning square was designed by landscape architects Juurlink (+) Geluk.

In 1922, Gustavus Adrianus Maria (Gust) Romijn was born in a doctor's family in Noordwijkerhout, after which he grew up in Rotterdam as a boy who could not be kept at school. Eventually he went to the art academy, but there too he lasted only three months. He could also be steadfast: he worked as a dock worker for ten years - you couldn't live off your art that easily. His travel-like existence started when he received a scholarship from Maison Descartes for the Paris art academy in 1954. After that he stayed in Milan, New York and was a guest teacher in Vancouver.

His oeuvre consisted of prints, paintings and plastics. Due to the enormous formats of his images, he stood out among potential clients. It wouldn't hurt him. His farm on the Kromme Zandweg became a studio where a large club of friends invaded, and where he also organized exhibitions of ever-growing objects.

Several assignments would follow after 1965, including a 30-meter-high sculpture for Schiphol, again in a totally different style, more businesslike and sleek. His works were exhibited throughout Europe. For years he was the regular designer of Poetry International and Film International and from 1970 to 1983 he was a senior lecturer at the Academy of Visual Arts in Rotterdam. He remained active until after the turn of the century, eventually more with paintings and especially his computer, interspersed with three-dimensional work. In 2010 he died in Dreischor, on Schouwen-Duiveland.

The idea lags behind in this versatile oeuvre Clouds not only. In notebooks Romijn sketched an organic city in the sixties and seventies without prefabricated elements but with very different elements. He drew whisper poles in various shapes, a grouping of concrete bicycles, a bed-in-concrete for the Coolsingel and one over the Delftsevaart. He sketched wonderful bridges, cloud-like object images, a huge iron on the sidewalk at the Hilton. They are combinations of monumental interventions with intimate places, to give the center a more varied appearance.

Fits in that line Clouds. That would enter the booklets as a protest against the leveling and dehumanization that the artist was so opposed to in the new residential neighborhood architecture and that had made him long for prehistoric forms of construction. He planned to set a good example in the back of his garden by building a kind of cave or hut in which you could do everything: sitting, lying down, sleeping, eating. "You have to remind people that there are other forms than boxes," he said. The then 42-year-old sculptor, known as a flamboyant appearance with red curls and colorful clothing, posed at the unveiling of Clouds in 1965 with black sunglasses and white clothing, tall and bold like the image next to him.

His work is in between architecture and sculpture. He therefore preferred to call himself 'image builder' instead of 'sculptor'. He built images with which you can do something without having a directly identifiable function - they are not play images, they are not homes, but creations where it is not clear what it is. Clouds was also identified with the active therapy of the patients in the clinic who had to move, partly due to the working title 'doe and lifestyle'. It is an image in which you can place your own meaning and which invites you to freedom. As Jan Donia once described Roman's bronze statues from 1965: “With our hands we have built the first houses, rough and primitive. Homes that rose from nature like plants. The images of Romijn have the same. They are, as it were, vegetation in the city. "

The relocation of Wolken is an initiative of BKOR and Erasmus MC and was realized in collaboration with landscape architects Juurlink (+) Geluk and the municipality of Rotterdam. The statue is the property of Erasmus MC. The execution is in the hands of MeestersIn and Binder Art Services bv. Text: Sandra Smets.

BKOR is a program from CBK Rotterdam. On behalf of the municipality of Rotterdam, BKOR manages more than 1500 artworks in the city. BKOR brings art and the city closer together and advises on the realization and (re) placement of works of art in public spaces.