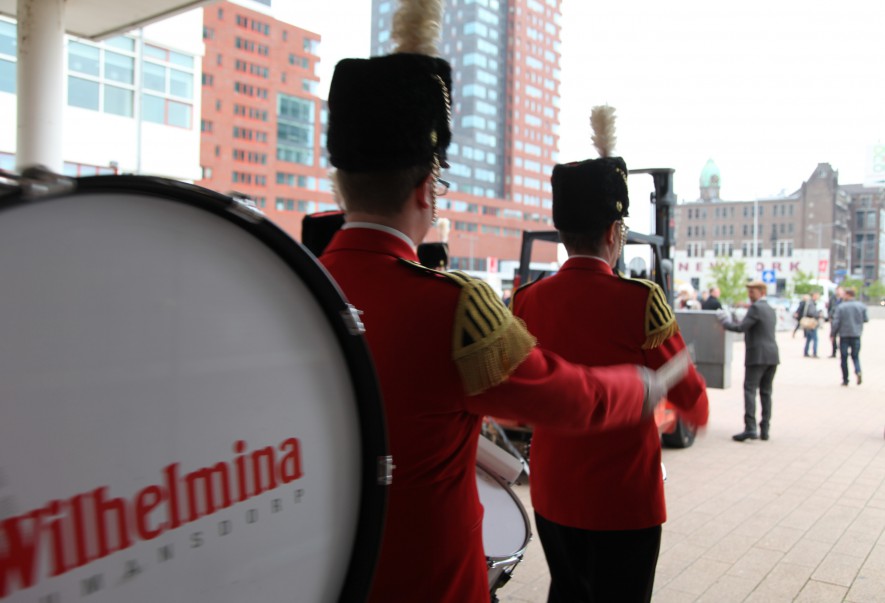 Wilhelminadag celebrated for the first time in Rotterdam

On Friday 30 in May around 17.30 around the clock, the first Wilhelminaday on the Wilhelminapier in Rotterdam is a fact. On that day, the time capsule in the quay wall of the Koninginnehoofd exists exactly one year. Time capsules play a game with time, where remembering and forgetting go hand in hand. The program of the first Wilhelminadag offers different ways to commemorate and to keep the memory of the time capsule alive. It will be a special birthday!

What about the Wilhelminasteen and the time capsule again?

On 30 in May 1891 visited the 10-year-old Queen Wilhelmina Rotterdam. The visit was under the strict direction of Regentes Emma and is seen as the start of the PR machine around the House of Orange. The Wilhelminasteen recalls this occasion in which she gave her name to the Wilhelminakade. Part of the ceremony consisted of placing a small time capsule.

After a few decades of oblivion, almost a year ago, on 30 in May 2013, the Wilhelminasteen was bricked back into the quay wall with great interest. An exact casting of the stone was placed next to the stone, in which a large time capsule was stored this time.

The Wilhelminasteen and the time capsule are part of the work of art that is special in several respects In Memory Of Things To Come by Arnoud Holleman, commissioned by the Center for Visual Arts Rotterdam. Not only did he give the Wilhelminasteen a new meaning, but he also made a work of art that will only be completed in more than 120 years, when the time capsule on 30 may be opened again in May of the year 2135.

The only person who knows exactly what is in that capsule is Arnoud Holleman. A number of objects are known, such as the 1000 questions. Holleman: “For the contents of the capsule, 1000 questions were devised for the future. Rotterdammers were allowed to ask a burning question to the future last year, so questions to the residents of the city in the year 2135. ”

From the questions, indestructible letter garlands were produced that all went into the capsule. The questions provide an intriguing picture of the here and now. Whether Holleman will lift a tip of the veil about the rest of the contents of the capsule will become clear during the talk show that can be heard via Radio Wilhelmina on www.wilhelminasteen.nl.

On 30 May 2014 we celebrate the first anniversary of the artwork, by reflecting on the past, present and future of this special place in Rotterdam. On this first Wilhelminadag there is a varied program with the participation of many.

Videos
The audio-visual duo Urbi et Orbi, known from Summer guests and the Kennedy memorial in Dallas, shows a short film about the sealing of the capsule.

Talk show
A radio talk show takes place in the library of Hotel New York between 18 and 19 hours. Mirjam de Winter speaks with, among others, Royalty expert Dorine Hermans, interior designer at Rotterdam Jurgen Bey and artist Arnoud Holleman. In the audience surprise guests who are all involved in the pier in one way or another.

Radio Wilhelmina / Webiste Wilhelminasteen
Radio Wilhelmina, the internet radio station from and about the Rotterdam Wilhelminapier can be heard on www.wilhelminasteen.nl. Listen to beautiful conversations and stories about the past, present and future of a unique piece of Rotterdam. For the first Wilhelminaday on 30 in May 2014, Team Wilhelmina is working with local radio station OPEN Rotterdam. From 26 May you can listen to daily reports, except online also on 93.9 FM.
In addition to OPEN, Team Wilhelmina has close ties with RTV Rijnmond. A number of long conversations from the Rijnmond Staat Stil program, about the future of Rotterdam with Inez Weski and Riek Bakker, among others, can also be heard on Radio Wilhelmina.
On Wilhelminadag itself, the public is welcome to attend the recording of the Wilhelmina radio talk show in the library of Hotel New York. Presenter Mirjam de Winter speaks with Orange Biographer Dorien Hermans, designer Jurgen Bey and artist Arnoud Holleman about the ups and downs of the pier.

On the first Wilhelminadag the official transfer of a document takes place with which the existence of the time capsule and the rules of the game is recorded in the municipal archive. Jantje Steenhuis, director of the Municipal Archives, says: “This is a unique case, also for us at the archive. Most archives open after 20, 50 or 75 years, while this archive will be revealed in 2135 at the same time as the capsule. We have never experienced that before. "

Club Wilhelmina
In order to involve Rotterdammers in the importance of the stone and the capsule, Club Wilhelmina will be established that afternoon, a club that will reflect on the past, present and future of the Wilhelmina Pier. Holleman: ”Club Wilhelmina is not obliged to do anything, only occasionally to consider the idea of ​​the time capsule and possibly to flower on 30 May. And gaze over the water from the Queen's Head, musing about the past, present and future of Rotterdam. It is a way to keep the capsule alive, but in a contemporary way. "

Flower offering
After the talk show at Hotel New York, a flower offering will be made on the stone and the capsule in the typical Rotterdam 'harbor way'. Pupils from primary school De Schalm who played such an important role in the sealing of last year come with their wreath. The 'Wilhelminapier pioneers' of the first hour, Dorine and Joan de Vos, also participate in this special floral tribute and musical ode to, according to some, the most beautiful place in Rotterdam.

The Wilhelminadag is a special project to which a large number of people and Rotterdam institutions contribute. The Center for Visual Arts Rotterdam, Hotel New York, the Nederlands Fotomuseum, RTV Rijnmond, OPEN Rotterdam, the Municipal Archive, Joan and Dorine de Vos, Gerrit Roukens of De Enk educational garden, the children of the public primary school De Schalm and Rotterdammers: all play a role in the project.