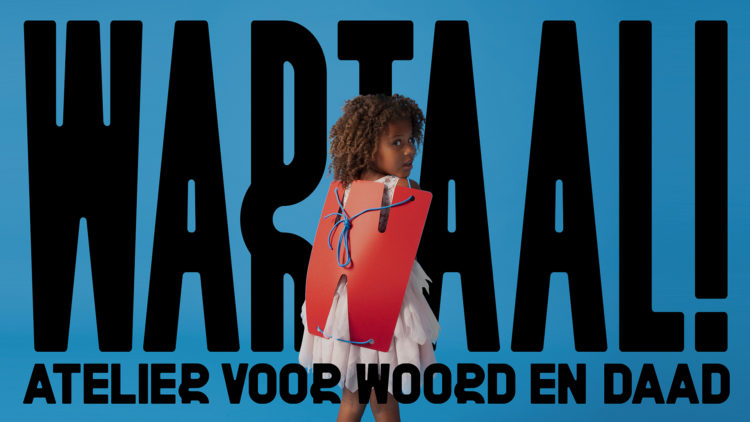 Wartaal - Workshop for word and deed

Opening: Sunday 21 July, 16: 00 hour at TENT. Free entrance.
Set yourself up in us Facebook event and stay informed about the opening program.

TENT en Theater Rotterdam transform the gym from TENT to 'this summerWartaal -Atelier for word and deed', a performance lab for children from 4 to 12 years old and for everyone who also feels like a child afterwards. During the entire summer holiday you can experience what performance art is and does at your own pace, level and manner through various assignments. A play, make and discover terrain in which you are challenged to shape your view of the world. In addition to performance as an art form, Wartaal's themes are also language in all its forms. Written language, invented language, spoken language, visual language, secret language, foreign language, baby language and language with different writing. Letters play the leading visual role here and can be found everywhere in the room, but they will also regularly lose their meaning. After the summer holiday, part of the studio in TENT will move indefinitely to the hall of the Schouwburg in Rotterdam, as a supplement to the youth program of the location.

Inspiration
Dadaism is great inspiration for Wartaal; Dada artists radically returned to their childish creativity and let chance play a major role in the creation of their work.
In poetry, the Dadaists wrote absurd poems full of incoherent nonsense, sometimes consisting only of pure sounds. Collage and assembly were commonly used techniques. In addition, Dada artists often created temporary art such as performances. It was originally a very politically committed pacifist movement of left-thinking artists who opposed society.
This resistance, or at least letting your voice be heard, whether or not in the form of protest, also has a place in the studio.

Partners
The design of the space is in collaboration with Studio Spass designed. Studio Spass is a versatile Rotterdam design agency founded by Jaron Korvinus and Daan Mens in 2008. Their designs are always rigorous and thoughtful, combined with playful cheerfulness. They have a preference for typography and, besides designing, have ample experience in giving workshops and interacting with the public. Writer, adventurer and program maker Raoul de Jong becomes the face of Wartaal. He welcomes visitors during an introductory film inspired by the 'Anyone can Dance' series that he previously made for Vila Achterwerk (VPRO). He has also come up with 26 assignments, the alphabet simply has 26 letters, which can be executed in a freely interpretable manner with guaranteed performance success. The studio is offered during the summer within the context of the Youth Holiday Passport. In this booklet, which every Rotterdam primary school student receives, 150 activities are offered throughout Rotterdam and the surrounding area. Admission is free for kids and supervisors.

Practical
Admission free for all children. Two adults can enter for free on presentation of a Youth Holiday Passport.