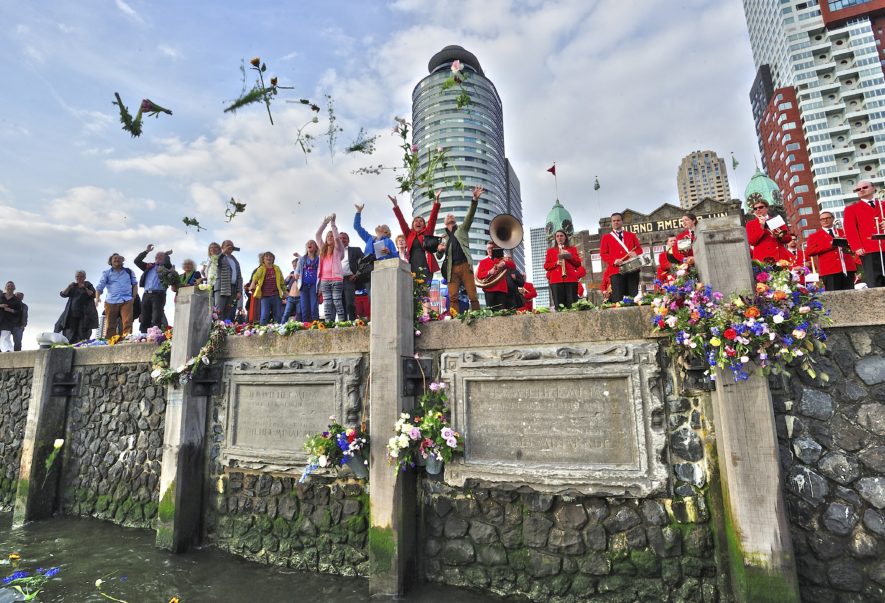 Lustrum: day of the time capsule

Wednesday 30 May 2018 is five years ago that the Wilhelminasteen and a casting of it were put back in the quay of the Wilhelminapier in Rotterdam. Led by Mayor Aboutaleb and artist Arnoud Holleman, a time capsule with 1000 questions from Rotterdammers was bricked into the quay of the Queen's Head behind the cast. The artwork was given the title In Memory of Things to Come.

Every year the artist and a small group commemorate the replacement of the original stone, the cast and the time capsule that will be opened in 2135. For the first anniversary all Rotterdammers are invited to celebrate this fact with a cheerful parade, wreath laying and a mini seminar about the present and the future. They are also asked to make their own mini time capsule on site. The 1000 questions in the time capsule next to the Wilhelminasteen are directed to a very distant future: the year 2135. Now, at the first anniversary, we ask another question: What do we know about what we didn't know about in 2013?

Holleman: "So much has happened in the last five years. In 2014 the MH17 was shot from the sky ... Rotterdam Central Station was reopened. In 2015, the Paris climate agreement was signed, the flood of refugees started ... and we thought Hillary would be the first female president. In 2016, David Bowie died ... and Trump came to power. Feyenoord became champion in 2017! ... and #MeToo went viral. I wonder how 2018 will go into history. How do we look back on now in five years? How is the world doing then? With Rotterdam? With ourselves? For example, who are the emigrants? "

seminar
The Time Capsule Day starts at 15.00 with a mini-time capsule seminar in the beautiful space of Robert van Oostrom in the Fenixloods, Veerlaan 19D, Katendrecht. Participants then make their own small time capsules by writing a letter to themselves and sealing it until a date to be determined. You can register for the seminar by sending an email to Mieke van der Linden via miekevdl@xs4all.nl.

Party program
Various speakers including historian Hans Goedkoop, the 13-year-old student Sarah Mourad en Wim pijbes, director Droom en Daad, refresh our memory - and emigrants of today make the (nostalgic) immigration stories of the Wilhelminapier hyper-topical. The presentation of the afternoon is in the hands of Jet Sol. After the indoor program, we depart (traditionally!) In a musical flower parade to the Wilhelminasteen, where special guest Wim Pijbes is an important addition to the artwork. In Memory of Things to Come will do. And where the public can ingeniously take a photo with the two Wilhelminastenen and the beautiful flowers.

Photo:
In 2014, during the first anniversary of the monument, there was a flower event where the description of the contents of the capsule was officially offered to Jantje Steenhuis for the City Archives.