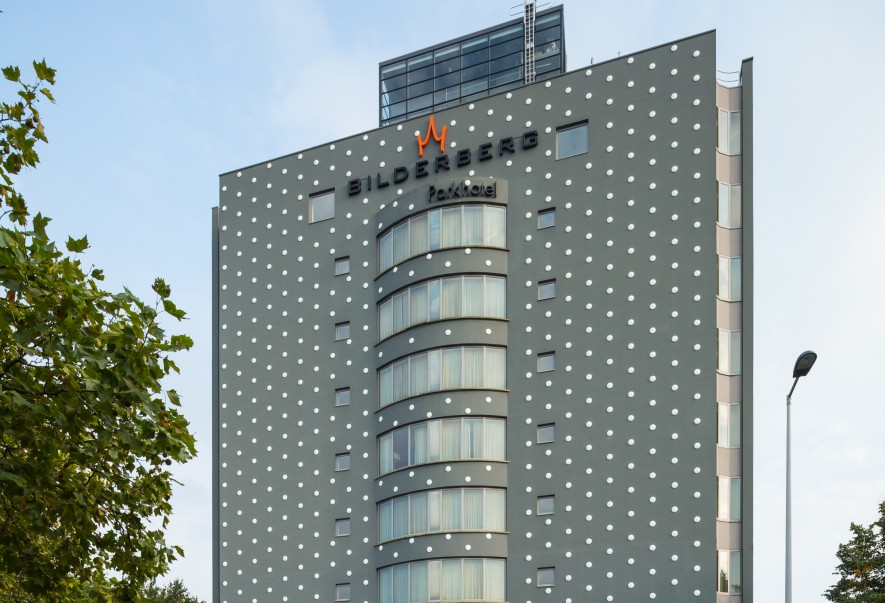 A new monumental work of art, formed by a grid of subtly glowing dots in the dark, recently adorns the facade of the Parkhotel in Rotterdam: The Individual Parallel - Bilderberg Utopia by visual artist Willem Oorebeek. Oorebeek's new work is an enrichment of the international sculpture collection of Sculpture International Rotterdam (SIR) at the entrance of the 'Museum Quarter'. Oorebeek (Pernis, 1953) made this work especially for the Parkhotel on behalf of SIR and BKOR (both part of CBK Rotterdam). The realization was made possible in part by the Mondriaan Fund and the municipality of Rotterdam.

The Individual Parallel - Bilderberg Utopia
The Parkhotel is located at the intersection of two major arteries in the center of the city: the Westersingel which runs from Central Station towards the Maas and the Blaak, which connects the west side of the city with the east. Partly due to its location on these connecting roads, the former white hotel formed the nickname La Grande Dame, has been a beacon for Oorebeek since the 80 years. For Oorebeek is The Individual Parallel - Bilderberg Utopia a unique opportunity to graphically add his famous 'dot grid' to the perception of the city. The material he chose for the execution of the work - composite - reflects the light from the surroundings, so that the facade of the hotel shows a subtle glowing pattern in the evening and night.

Unveiling by Mayor Aboutaleb
On 23 September at 17.30, Mayor reveals Aboutaleb The Individual Parallel - Bilderberg Utopia by adding the last dot. With the unveiling, the Parkhotel marks the completion of a radical transformation of the ground floor: new meeting rooms, a beautiful Cigar Lounge and atmospheric Lobby Bar have been created. The lobby has also been redesigned. The Park - inspired by Erik van Loo has been the Parkhotel's new restaurant since 30 June 2014. The restaurant also underwent a metamorphosis, including the addition of a veranda that leads to the inner garden of the hotel.

Z-Files: Mini symposium
Prior to the festive opening, SIR and BKOR organize in the program series Z-Files, Art and the City a mini symposium in which this new work by Willem Oorebeek is central. Oorebeek gives a presentation about his new artwork; art historian and art critic Jeroen Boomgaard talks about this new work in the context of the SIR collection; and Saskia Stein (artistic director NAiM / Bureau Europa in Maastricht) interviews the artist about the position of The Individual Parallel - Bilderberg Utopia within his oeuvre. (Registration for the symposium is no longer possible.)

Willem Oorebeek
Willem Oorebeek's work is largely based on the tension between the individual and the public domain. Oorebeek is a visual artist who is important for several generations of artists in Rotterdam. He is represented in museum collections at home and abroad and has international exhibitions. His work is represented in Museum Boijmans Van Beuningen, the Stedelijk Museum Amsterdam, Generali Foundation Vienna, Stedelijk Museum for Actual Art, Ghent, and De Nederlandsche Bank collection. Working and living in Brussels, Oorebeek is intensively involved - as a teacher, advisor and teacher in the Netherlands, Belgium and Austria - in knowledge transfer and the debate about art and art education and the reception of art.

Made possible thanks to

With the Parkhotel, SIR and BKOR took this initiative, which was financially generously assisted by the Mondriaan Fund and the municipality of Rotterdam.

Within the CBK Rotterdam, BKOR and SIR are concerned with 'art and the city'. SIR works among other things on the urban lines of the city and wants to honor the top of the Rotterdam artists with a special work in their own city. This is done in collaboration with BKOR.

Z-Files newspaper #2 Z-Files newspaper #2, Art and the City. Can also be read online
Z-FILES #13 Louis van Roode Z-Files #13 on Thursday 29 October in the foyer of the Rotterdamse Schouwburg.
Z-Files #12 Art and the City, Free Looking ahead, visions and some flashbacks from Art and the City
Z-Files #11: Street Art - Now & Beyond The 11e edition of the Z-Files is about Street Art.
Z-Files # 10: 1989 - John Körmeling On 16 April, SIR celebrates the return of work 1989 op Zuid with a Z-Files over and with John Körmeling.
Z-Files #9: It's Never Too Late to Say Sorry at Art Rotterdam Sculpture International Rotterdam presents during Art Rotterdam: Z-Files #9: It's Never Too Late To Say Sorry
Z-Files #8: Looking For Europe In the 8e edition of the Z-Files on Thursday 29 January, BKOR and WORM go 'Looking For Europe' in a talk show with films and guests.
Z-Files #7: Apples from Kees Franse The 11e Z-Files takes place on December 7, following the recently renewed 'Appels' by Kees Franse.
The first Z-Files newspaper is out! The first edition of the Z-Files newspaper appeared in September 2014.
Z-Files # 6: Breytenbach and Lucebert In response to renovated works by Breytenbach and Lucebert, Ernest van der Kwast talks to Breytenbach and Kamargurka
Z-Files # 5: Erik van Lieshout This edition of Z-Files revolves around the work of artist Erik van Lieshout, and his relationship with Rotterdam South.
Z-Files # 3: IT Afternoon program about the last Rotterdam art work in the percentage scheme: IT in Brainpark III
Z-Files # 2: Steen in Water book presentation Z-Files, Art and the City: as part of IABR – 2014 – URBAN BY NATURE, the publication Steen in Water is presented.
Z-Files # 1: The Great Anita Controversy Lecture and debate program The Z-files, art and the city kicks off with 'The Great Anita Controversy'.