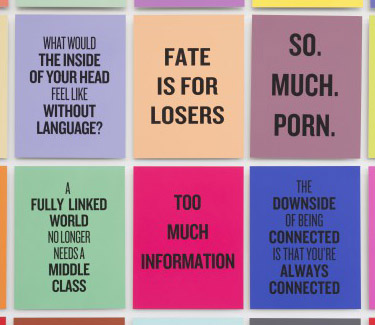 Author and fourth generation Rotterdammer Elfie Tromp invites Rotterdammers including artists, thinkers, writers but also a bar owner and students to create a slogan for the future of Rotterdam. With Slogans for Rotterdam 'Make it Happen', the current slogan of Rotterdam, is examined and questioned. Is Make it Happen the perfect slogan for Rotterdam or could we present a better Rotterdam motto to Mayor Aboutaleb? Slogans for Rotterdam is part of the exhibition Utopian Dreams and inspired by Douglas Coupland's Slogans for the 21st Century, a growing collection of statements, with which he tries to isolate the way of thinking in the twenty-first century versus the twentieth century.

During the period of the exhibition Utopian Dreams writes Elfie Tromp in the exhibition space to her new novel and slogans and texts with invited guests. The new slogans are collected and presented in the TENT exhibition space. The slogans are also distributed digitally. On Wednesday 18 May revealed Douglas Coupland is the first to launch his 'Slogan for Rotterdam', he tells Elfie Tromp about the background of his choice and gives the go-ahead for the project. Then the Mwah copywriters give a slogan writing workshop.

In the context of Rotterdam is celebrating the city! Kunstblock works in 2015 - 2016 collaborates with Douglas Coupland as 'artist in focus' under the title Futurosity. Coupland (1961) is a Canadian visual artist, best-selling author, designer and avid collector. With his debut novel Generation X, he immediately achieved a reputation as a visionary of our near future. The Futurosity Summit, a symposium with Douglas Coupland, will take place on 18 and 19 May in which the relationship between mankind and the concept of 'future' will be sharpened.

Kunstblock consists of TENT Rotterdam, CBK Rotterdam, V2_ Institute for Instable Media, Showroom MAMA, Witte de With Center for Contemporary Art and WORM, Institute for Avant-garde Recreation. Futurosity is part of Rotterdam celebrates the city! and is supported by the Municipality of Rotterdam and The Art of Impact.

Utopian Dreams TENT shows plans and dreams of artists and architects for a new Rotterdam.
Coolsingel as a Monument A special tour of the Coolsingel in the context of the Futurosity Summit.
Futurosity Summit The Futurosity Summit consists of lectures, workshops, tours and debates about the future.
Kunstblock Kunstblock is a collaboration between the cultural institutions on Witte de Withstraat: Showroom MAMA, TENT, V2_, Witte de With Center for Contemporary Art, WORM and CBK Rotterdam. Kunstblock sees it as its mission to shape the living environment and the further development of Witte de Withstraat as the cultural heart of Rotterdam by means of