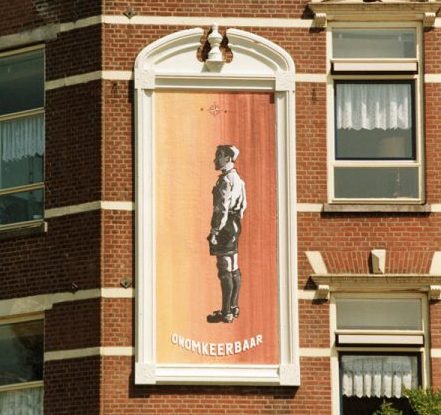 Ad Schouten gives a picture of himself as a ten-year-old boy in the 50 on this mural in the ornamental frame on Bloemfonteinstraat. He lived here until his 12e, together with his parents and his grandmother. He looks out over Katendrecht and the then busy Maashaven, where loading and unloading took place and where children could play endlessly. Local residents kept an eye on things, there was a great deal of solidarity and social control. Schouten refers to the passing of this period with UNREVERABLE.

On Wednesday 25 April at 17: 00 hour, the work of Ad Schouten will be reopened with words from Siebe Thissen (head of BKOR, CBK Rotterdam). Following the restoration and reopening of the wall painting UNREVERABLE, the publication VOX is also presented (in the Player on Hillelaan 49D). The publication was made by Gerard Bellaart, fellow of Ad Schouten at the academy of visual arts and Rob de Moes, friend of Ad, following Ad's death on 19 July 2017. VOX contains a poem by Ad, fifteen images of his works, excerpts from an e-mail exchange between Ad and Gerard and a text by Rob de Moes.

The wall painting IRREVERSIBLE van Ad Schouten is being restored by order of CBK Rotterdam and Vestia.