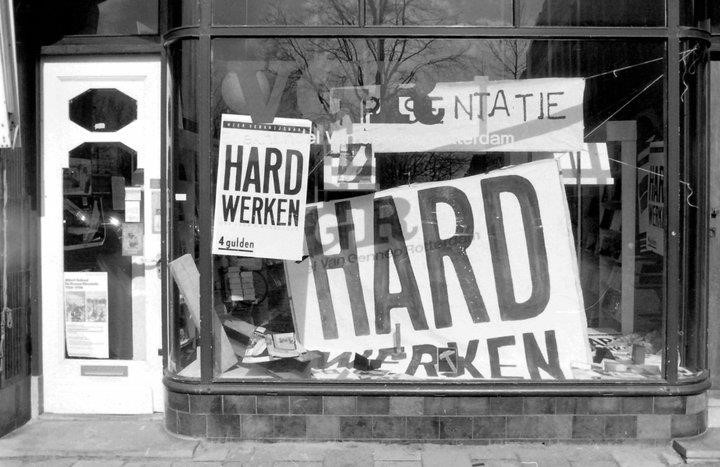 On the first floor in the building where both TENT and Witte de With are located, both art institutions put together an exhibition that in turn shows a part of the cultural history of Rotterdam. Hard Werken is shown by TENT in the eighth edition.

Rotterdam Cultural Histories # 8 shows all editions, photos and other archive material from the illustrious magazine Hard Werken. Although only ten issues of this cultural magazine appeared in the 1979 - 1982 period, it has had a major impact on an entire generation of graphic designers in the Netherlands and abroad. The presentation has been compiled by Reyn van der Lugt and Marjolein van de Ven.

Hard work
The striking A3 format, the anarchist design avoiding all the typographical rules applicable at the time, the large role for photography and a group of employees who mainly vary from the visual arts and literature, characterized this new initiative directly as a stubborn, elusive but above all Rotterdams phenomenon.

The magazine gave Rotterdam writers and poets a lot of room: the pre-publication of Jules Deelder's book about Rotterdam boxer Bep van Klaveren is known. In addition, comments were also given on Rotterdam urban development and architectural developments, in particular against the 'new dullness'. The magazine became the mouthpiece of a dynamic metropolitan, international culture. But even more than the content, the magazine was characterized by its specific design. The interior was black and white, the covers in exuberant colors. Skewed texts and photos, drawings and collages, dozens of fonts in one number; everything was used interchangeably in a unique design that developed into a new 'style'. There was also a lot of attention for photography. Many participating artists developed into what was called the Rotterdam School for (staged) Photography in the mid-1980s. The advertisements in the magazine were also designed according to the same unorthodox principles.

The fixed core consisted of Gerard Hadders, Rick Vermeulen, Tom van den Haspel, Henk Elenga, Kees de Gruiter and Willem Kars. The latter was also responsible for the Graphic Workplace of the Rotterdam Art Foundation, where the magazine was printed. The initiators of the magazine also set up the Hard Werken design agency in 1980. Initially they mainly worked for Rotterdam cultural institutions, later also for clients in the rest of the country and abroad. Their series of posters for the International Film Festival Rotterdam from 1984 to 1994 became famous.

Hard Working was of great significance for the cultural self-esteem of Rotterdam. The many artists associated with the magazine penetrated nationally and internationally. The magazine seemed to be the harbinger of a new cultural impulse that finally freed Rotterdam in the 1980s and 1990s from the image of the dull, culturally poor port city.

In the spring of 2017 appears at Valiz an extensive publication about the history of design agency Hard Werken.