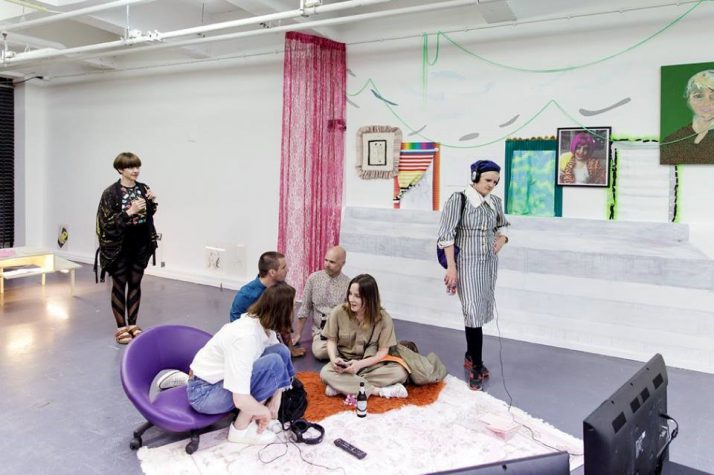 During the free Art Night on Friday 6 October the performance Repair of Angelica Falkeling will take place at 19.30 hours. Repair is set in a TV studio during rehearsals for a talk show. The director, guests and musicians get involved in a conversation whose script is based on spontaneous events, conversations and educational TV programs. The starting point of the performance is the figure of the 'joykiller', a feminist concept with which theorist Sara Ahmed designates someone who does not adhere to the conventions that are supposed to deliver happiness and satisfaction, and thus opens space for new possibilities. Angelica Falkeling wrote the script and executes it with Ash Kilmartin. Artist and film maker Erika Roux acts as a director and Nika makes music.

Angelica Falkeling works with performance, clothing, moving images and text. She deals with topics such as trust, the potential of love and the power of vulnerability. Her artistic persona often appears as instigator, tailor, and storyteller. Her work has been exhibited in DELFI in Malmö, Konsthall C in Stockholm, San Seriffe in Amsterdam and Tensta Konsthall in Stockholm, among others.

The performance takes place in the context of the exhibition Among other things, I've taken up smoking.
English spoken, 40 min.