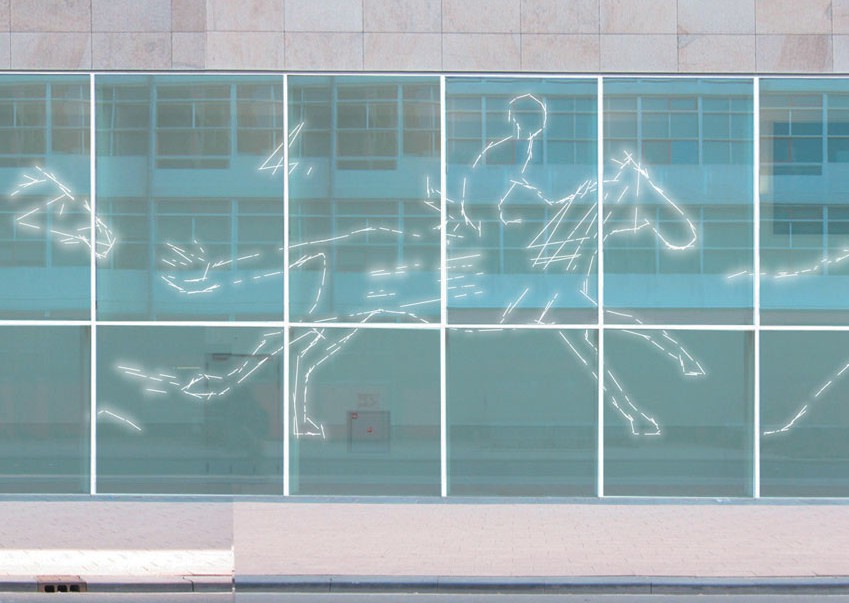 Especially for the film and music theater LantarenVenster, visual artist Giny Vos has commissioned the CBK Rotterdam to design a light artwork, Light Gig. The monumental installation can be seen from the Otto Reuchlinweg. On 15 September 2014, the first public preview of the new work will take place during the closing of the 24 Hour Culture event.

Light Gig
Light Gig refers to the Muybridge horse from 1878. The British Muybridge built a zoopraxiscope: a round in which he had the animal run around and photographed. This resulted in individual photos and the illusion of moving images. Muybridge was an immigrant in America, a Brit of Dutch descent, who helped to develop the great American art form, cinema. Such a tribute fits a film house, but the Wilhelmina Pier is also a good place for an ode to an immigrant, since this location was a departure point for the Holland-America line in the nineteenth and twentieth centuries.

With Light Gig the cinematic dimension is revealed that lies in the metropolitanism of the Wilhelmina Pier. The work of art is made up of LEDs with extra strong crystals, so that it does not appear to be behind the window, but on it, and has a fierceness and speed with which it not only gives the building a different look but also changes the appearance of the street and of the pier .

On 15 September, during 24 hours of culture, the work can be seen for the first time, in test form: then Giny Vos tests which choreography, with accelerations and delays, fits best with the work and the street.

Giny Vos
Originally from Rotterdam visual artist Giny Vos (1959) lives and works in Amsterdam. She received her training between 1985 and 1990 at the Gerrit Rietveld Academy and the Rijksacademie in Amsterdam. Her farewell to Rotterdam consisted of the iconic WORK TO DO, a light installation from 1985 on Marconiplein. She has been building 25 for years on an impressive oeuvre that can be seen primarily in public spaces and is based on light and movement. In 2004 she received the Witteveen + Bos prize for Art + Technology. In 2010 a monograph Singing in The Dark was published by Valiz.

Lantern window
In 2010, LantarenVenster, the Rotterdam jazz stage and film house, moved from its location in the old city center to a new building on Wilhelminapier, the Kop van Zuid. This new and much larger housing was designed by Alvaro Siza and BURO M2R, but lacked the grandeur and dynamics that go with this illustrious culture stage and this location full of sight axes. Together with the Centrum Beeldende Kunst Rotterdam, LantarenVenster approached artist Giny Vos, who made a design for them that goes back to the prehistoric era of film history.

24 hours of culture
At the end of the 24uur culture event, Rotterdam Festivals traditionally organizes a festive drink on the occasion of the opening of the new cultural season. Antoinette Laan, alderman for sport and recreation, art and culture, will officially open the new cultural season on Sunday 15 September at 17.30 hours in the foyer of LantarenVenster. On the same evening, in LantarenVenster, in collaboration with Stichting Jazz International, the cultural season at 20: 00 hour starts with a film concert by the Metropole Orchestra led by Ernst van Tiel, for the screening of the film classic L'Inhumaine by Marcel L'Herbier.