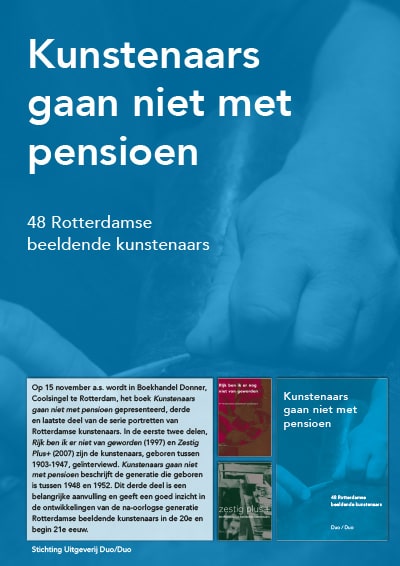 Artists do not retire

The book Artists do not retire will be presented in Donner on Friday afternoon 15 November, it is the third and last part of the series of portraits of Rotterdam artists. CBK Rotterdam helped make the publication possible and three-way actor Ove Lucas also provided textual contributions.

In the first two parts, It didn't make me rich (1997) in Sixty Plus + (2007) the artists born between 1903 and 1947 were interviewed. Artists do not retire describes the generation born between 1948 and 1952. This third part is an important addition and gives a good insight into the developments of the post-war generation of Rotterdam visual artists in the 20e and start 21e century.

The post-war generation has produced a large number of artists with a striking and often recognizable visual language. Most were formed at the Rotterdam Academy of Visual Arts and trained by teachers who appeared in the aforementioned series. Many of them have taught at the academy. It is interesting to see what their influence has been and what the positive change and appreciation with regard to the visual arts in the seventies as a common source of inspiration have added to this. It has certainly been able to promote cooperation among themselves and with other disciplines. These artists, whose work is included in the City Collection and the collection of Museum Boijmans Van Beuningen, who were able to use the BKR and other subsidy schemes, are now entitled to AOW. They are 'retired', but cannot or will not stop their creative work.

The book not only describes the artistic development of this generation of artists, but also the development of the art climate in a broad sense. All artists in this book discuss the development outside the studio in one way or another, at exhibition locations, the market, the galleries, government support, the development of professional arts education etc. The book is therefore more than just a description of 48 individual artistic careers and oeuvres. It also describes the development of the city of Rotterdam as a city in which visual art was increasingly taken seriously. Especially in the period in which this generation of artists came to fruition, and in which the improved art climate ensured that many outside artists found Rotterdam a good place to live and work. The innovative art policy of the Rotterdam Art Foundation and later the Center for Visual Arts Rotterdam has certainly given this a positive boost.

It is a publication of Uitgeverij Duo / Duo, again established in collaboration with CBK Rotterdam and the Willem de Kooning Academy Hogeschool Rotterdam, this time without a contribution from the municipality of Rotterdam.