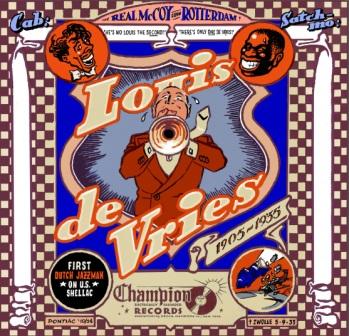 On 31 August 2014 a new large mural by Peter Pontiac is unveiled at 16: 00 hours on the Oude Binnenweg (corner of Eendrachtsplein) in Rotterdam. He made a portrait of trumpet player Louis de Vries. The portrait is part of the Jazz Route Rotterdam Jazz Artists Memorial (R'Jam).

Rotterdam Jazz Route
Since 2013, portraits of jazz musicians from Rotterdam have appeared regularly on the Oude Binnenweg. Together they form a 'jazzy' route along the most Rotterdam street. The new and comprehensive portrait by Peter Pontiac is the seventh in the series. After Pontiac, more works by famous deceased Rotterdam Jazz musicians will appear on this jazz and comic route.
The route is a portrait gallery drawn by famous cartoonists and illustrators, spread over the Oude Binnenweg and the adjacent side streets. In the series of six enamel plates you will find work by Theo van den Boogaard (drummer Dick Rijnooy), Robert van der Kroft (saxophonist Piet le Blanc), Jan Kruis (pianist Rob Franken), Martin Valkhoff (multi-instrumentalist Jaap Valkhoff) , Louise Lagerweij (drummer Tony Viola) and Wouter Tulp (violinist and orchestra leader David de Groot).
With the new work of Peter Pontiac, the jazz and comic route is given a defining addition, namely a mural by 5,5 at 5,5 meters on the corner of Oude Binnenweg / Eendrachtsplein. The painting by Peter Pontiac is followed by works by Dick Matena (saxophonist Piet Noordijk), Martin Lodewijk (pianist Nico de Rooy), Lorenzo de Bruin (singer Mitsey Smeekens), Joost Swarte (saxophonist Meijer Wery) and Wilbert Plijnaar (singer Rita Reys) ).

Peter Pontiac
Peter Pontiac (born as Peter JG Pollmann in 1951) is an illustrator and cartoonist. He draws underground strips, posters and record covers and regularly publishes in Aloha, Aunt Leny presents !, RFP illustrations, Modern Paper, Gummi, El-Vibora, Anarchy comics, OOR, NRC Handelsblad and de Volkskrant. His work was reissued in the Pontiac Review series in the 1990s. Pontiacs' drawings are inspired by underground comics in general and the work of Robert Crumb in particular. His style is compared to that of Jacques Tardi and Art Spiegelman. Pontiac is the in-house artist of the comic shop and exhibition space Lambiek.

Louis de Vries
The world-renowned trumpet player Louis de Vries was the eldest son of amateur trumpet player Arend de Vries, who in his spare time conducted the Excelsior fanfare orchestra and the Rotterdam Fire Brigade and gave his children Louis, Jack, Izaak and Clara trumpet and music lessons. They would become the most important Dutch jazz musicians of their time. Louis de Vries was the first Dutch jazz soloist of whom a record was released in the United States.

'Almost all the big ones in the show business of the time knew about his existence and he was almost always prominent when he visited famous foreign artists. Sophie Tucker, the Boswell Sisters, Cab Calloway, in short, all the stars of that time, from Richard Tauber to Louis Armstrong, knew Louis de Vries.

De Vries' first permanent engagement was in October 1921 with the Max Tak cinema orchestra. He then toured regularly with major foreign orchestras, such as those of Oscar Logan, Edgar Adler and Kai Ewans. Only in 1931 did he start his own ensemble. In 1933 he completed his brother Jack's band, The Internationals. Throughout November 1934 played The Internationals at the Grand Café Sihlporte in Zurich. On November 30, 1934, Louis Armstrong honored the De Vries brothers with a visit. According to Jack de Vries, Louis Armstrong was so impressed with De Vries' game that he called him "Louis de Vries the first" and not "Louis Armstrong the second", as the Rotterdammer was often called. Armstrong wrote to the de Vries brothers that they had the best orchestra he had ever heard in Europe. At the beginning of January 1935 even the tenor saxophonist Coleman Hawkins joined the band. Louis de Vries left 1935 to England in February for recordings with Valaida Snow and the orchestra of Bert Ambrose. In the summer of 1935 Louis played in the orchestra The Jumping Jacks of his fellow townman Arie Maasland, later known as Malando. Shortly after Louis de Vries had signed a contract for a year and a half tour of the United States with the famous Paramount Orchestra, he was mortally wounded on 31 August 1935 in a traffic accident in Hattemerbroek. A few days later he died of blood poisoning at the RK Hospital in Zwolle on 5 September 1935. The 'De Jazzwereld' magazine spoke of an irreparable loss. The De Vries family would not be spared from further calamity.

Made possible thanks to support from the municipality of Rotterdam and the Prins Bernhard Cultuurfonds.

Thanks to Van Looije Properties and Leo Mineur