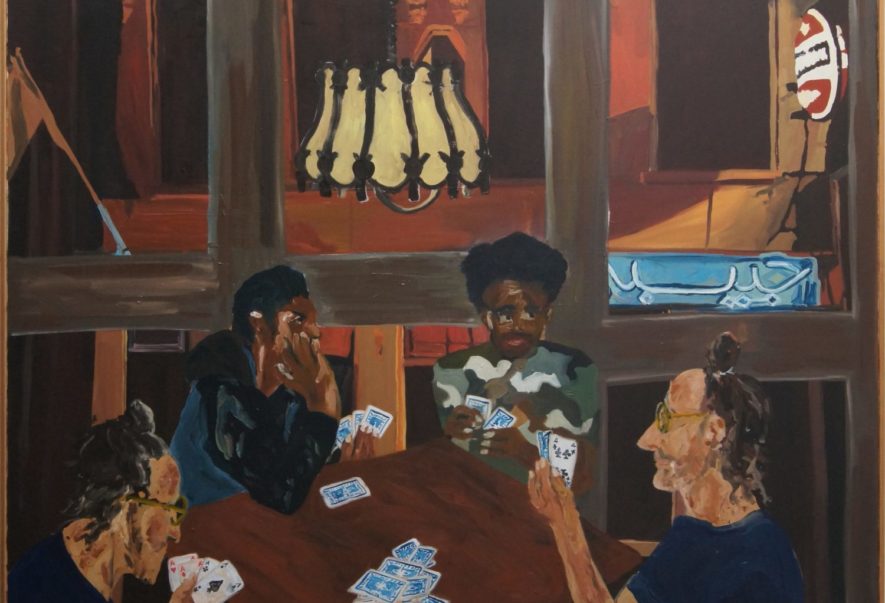 The exhibition Wild Bet revolves around gambling as a social psychological phenomenon. The exhibition is a theatrical total installation, in which artist duo Gil & Moti take the viewer into a world of public gambling machines, seductive gambling halls, simple back rooms and illegal gambling, and in the promise of happiness therein. The artists saw a connection between the chance gamblers take in the hope of financial happiness, and the gamble that migrants take when they leave their home in the hope of a better life. They delved into the gambling scenes of three different cities - Rio de Janeiro, Helsinki and Rotterdam - and got into conversation with migrants about their motives and their lives.

In an intensely personal, disarming way, Gil & Moti released penetrating stories about lack of perspective, the lack of home, the sometimes hostile new environment, and the parallel world of the gambling hall or the gambling game as an opportunity to escape from it. They processed those stories into room-filling installations, in which they play with the specific atmosphere and setting of the gambling scenes in the three cities. The main role is for videos, in which they drive the abrasive documentary reality with burlesque imitation or soften it with loving attention.

Field research in Rio, Helsinki and Rotterdam
Aan Wild Bet preceded three years of field research on location. In Rio de Janeiro, Gil & Moti followed the trail of the illegal gambling game 'Jogo de Bicho' (animal game) that is played everywhere on the street. Here they made a film with Gustav, who sets himself up as their gambling instructor and guide, reveals the genesis of the game, shows the harsh daily reality in the favelas and tells about his dreams and concerns about his children.

In Helsinki, Gil & Moti saw how government-run slot machines can be found in every supermarket and how the most popular games represent a folkloric fantasy land. The idyllic Finnish nature and cheerful farmers and gold diggers from the gambling games form quite a contrast with the stories of the various migrants that Gil & Moti meet here.

In Rotterdam, Gil & Moti found both commercial gambling halls with their enticing aesthetics of gold and glitter, as well as informal card tables in the back of brown cafés. Here the artists entered into an intimate collaboration with Shari, who came to the Netherlands 24 years ago to get her son back but could not afford the return trip. From many encounters they created a layered image of a life on the edge of Dutch society, where the sometimes stifling experience of exclusion and loneliness is interrupted by small moments of luck in the gambling hall.