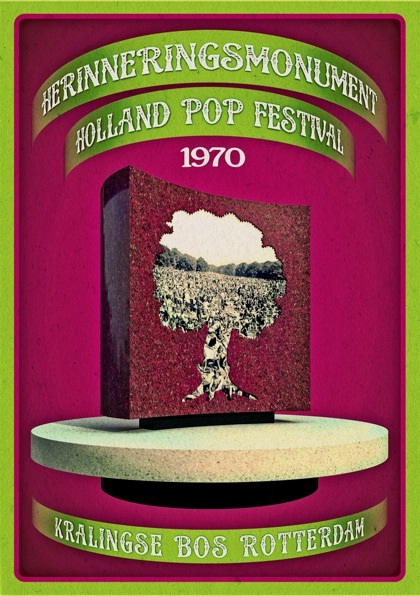 Monument for the Holland Pop Festival 1970

More than 40 years later, Kralingen receives a monument in honor of the Holland Pop Festival that took place in 1970 in the Kralingse Bos. On Saturday 21 September 2013 at 17.00, the monument will be unveiled that was designed by visual artist John Blaak.

Monument
The image for the Holland Pop Festival 70 keeps the memory of this special event alive. Which visitor to the Kralingse Bos knows today what kind of historical event took place at this location in 1970. Who is reminded of the three special days in June of music, freedom and pleasure.
The artwork keeps this historical fact alive with its visual language. In the monumental statue you recognize parts of the posters from 1970 and an atmospheric image of the enormous crowd. The CBK Rotterdam approached Zuliani Kunst and Terrazzo bv for the production of the image.

The unveiling
The unveiling at the Plaszoom in Rotterdam is surrounded by various activities. There is an official part with an interview with the organizers of the pop festival in 1970, Georges Knap and Berry Visser, opening words by Ove Lucas, director CBK Rotterdam and Paulette Verbist, portfolio holder Welfare, Culture and City Shop of the Kralingen-Crooswijk District. Subsequently, performances by cover band Kbam with music from bands that played at the time of the Holland Popfestival and The Dutch Joe Cocker, The Kik, HeavyLight and DJ Bootsy Paul. Intermediate act Then happiness was very common with Sjoerd Pleijsier & Ids van der Krieke. Also shown are images from the Polygoon Journal annual review, the trailer Lost Footage, a documentary about the Holland Popfestival 1970 by Ferri Ronteltap and fragments of the film Stamping Ground (1971) by Jason Pohland and George Sluizer. Finally, a Pink Project performance.