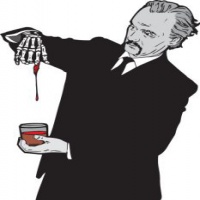 La Grande Fête des Voyeurs is the first overview of the Rotterdam artist Han Hoogerbrugge. TENT presents its interactive animations, video projections, slide sets and drawings from the past fifteen years. From the pioneering stage in which Hoogerbrugge made moving animations with simple computer software, to the sophisticated computer technology with which he sets the audience in motion to play his games. Hoogerbrugge has become a prominent example of a contemporary cross-media artistic practice, in which the boundaries between virtual and real, between dream and nightmare, between high and low art, do not exist. Hoogerbrugge's drawings and animations are regularly seen at festivals, during pop concerts, in newspapers and magazines, but also in museums, exhibition rooms and galleries.