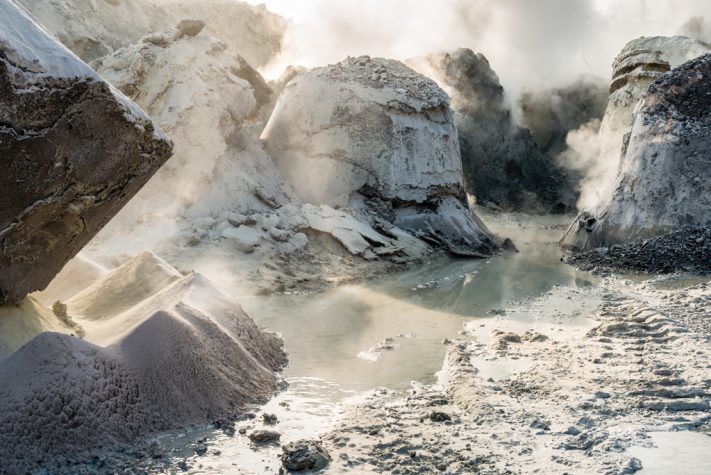 From 16 March to 14 May two exhibitions can be seen in TENT. The simultaneous solo exhibitions Customs and Claims from Julien Grossmann and Schlak of Giuseppe Licari open on 16 March at 20: 00 hour. DJ Love on the Beat will play records during this opening.

Giuseppe Licari - Schlak
Schlak is the newest chapter in Giuseppe Licari's research into the relationship between man and nature. In one of the most important areas of the European steel industry, he collected as a geologist the rocks that remain as a residual product after the iron has melted with 1535UMC. Licari shows his collection of snail stone in combination with images that make tangible how a whole new layer of earth has arisen as a result of human actions. He also took pictures of the post-industrial landscape that, with strange colors and hills up to an 50 meter high, is both disturbing and fascinating. His collection of snails can be read as a geological archive that bears witness to the economic and social processes that have shaped the contemporary landscape.

Julien Grossmann - Customs and Claims
Sculptural sound works play a leading role in this first solo exhibition by Julien Grossmann in the Netherlands. Grossmann draws on sound recordings from the early 20 century to the present, ingeniously transforms musical instruments and sound equipment, and makes surprising connections with histories of culture and globalization. Grossmann plays with the ability of sounds, no matter how abstract, to immediately evoke a connotation with a certain place and cultural context. He uses instruments that are closely linked to histories of empowerment and emancipation, sounds that have become a cultural cliché or that are enveloped in nationalistic sentiments, and songs that are a musical testimony to globalization. But he also manipulates and distorts sounds, changes the key of an instrument and builds his own, visual music players and audio sources. In this way he makes the associations and sentiments attached to certain sounds astonishing or uncomfortable, and he connects sound, as an intangible testimony of cultural and economic relationships, with matter, such as oil, which have largely determined the cultural and economic relations in the world .