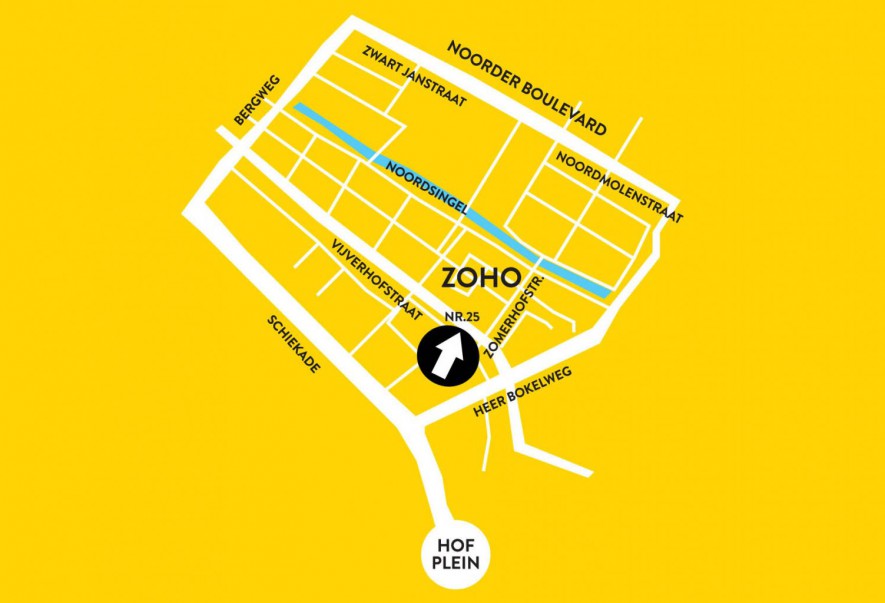 Route du Nord is a nomadic art exhibition in Rotterdam Noord, with the aim of displaying art from young and established talent in an accessible environment. Route du Nord 2017 takes place in ZoHo or the Zomerhofkwartier (Central Expo, Route d ”Ambiance) and on Zwart Janstraat and Noordmolenstraat that together form Noorderboulevard (Boulevard du Nord). Both locations are within walking distance of each other. This year's Central exhibition will be hosted by guest curator Piet de Jonge. This year too, the CBK Rotterdam has invited various visual artists to be part of Route du Nord. Their work can be seen in the Central Expo of Route du Nord on Vijverhofstraat 25.

Sander Bokkinga is an architect. Creating his own spaces and universes - on the edge between imagination and reality - is therefore an important part of his work. In recent years, Bokkinga has more and more been running the entire autonomous work field full of urbanistic architectural fables. He shows during Route du Nord GROWING FAT WHILE SLEEPING, in which he has placed a pig in a fictional cash register at the entrance.

Design for the wall painting of Said Kinos and Nuno Viegas

Said Kinos and Nuno Viegas
Rotterdam-North is bursting with creativity in an increasing infrastructure of studio buildings, project spaces and galleries. Route du Nord is not only part of this but also contributes to connecting these places. Especially for Route du Nord, artists Said Kinos and Nuno Viegas make a painting at the Central Expo, in which that creative infrastructure is depicted. Said Kinos has a background as a graffiti artist and completed the graphic training of the Willem de Kooning Academy. The Portuguese artist Nuna Viegas (aka Metis) has been living and working in Rotterdam since 2014. His work is strongly influenced by graffiti and even a tribute to everyone who devotes himself to the graffiti culture.

Shafelly Snijders and Hester Terpstra (A Lightwork)
The Rotterdam Pride Life cinematic docu series by filmmaker Shafelly Snijders deals with gender and sexual diversity. Lesbian, homosexual, bisexual, queer or transgender, every sexual orientation seems to fit a label. But whatever characterization it gets, there is often a deep search for yourself beforehand. In Rotterdam Pride Life, three main characters, interviewed by Hester Terpstra, talk about their struggles and the process they have gone through to dare to become themselves. The triptych is made with a poetic lightness in which the city of Rotterdam is central. For the films, the makers went looking for shapes, colors and buildings in Rotterdam that matched the characters. Against this the emotional lives of the characters Donya, Isis and Salomon were put at the center.

Mia Andrésen
At the age of 17, Mia Andrésen left her home town of Kiruna in Sweden. Two years later she left Sweden. Because of her work as a designer and teacher of fashion and visual arts in Rotterdam in the past decades, she has been unable to develop her artistic process for years. This realization felt like a breaking point, after which she returned to Kiruna to conduct research into her history, basis and context of her artist's activities with the aim of bringing a new balance to her professional practice. Kiruna is a young, noisy city, isolated on a mountain and surrounded by wilderness. The inhabitants, just like Andrésen in her personal development, are in stages of transformation, discovery and renewal. Her findings are shown in an impressive video work.

Rotterdam Pride Life; Labeling or not labeling? Filmmakers Shafelly Snijders (34) and Hester Terpstra (37) made three short penetrating portraits about their sexual orientation with Salomon, Donya and Isis
R&D honored In the 2 round of the 2016 R&D scheme, 18 applications were honored for a total amount of € 101.575.
Art festivals in North and South Two art festivals will start in Rotterdam on 10 June: Charlois Speciaal and Route du Nord.