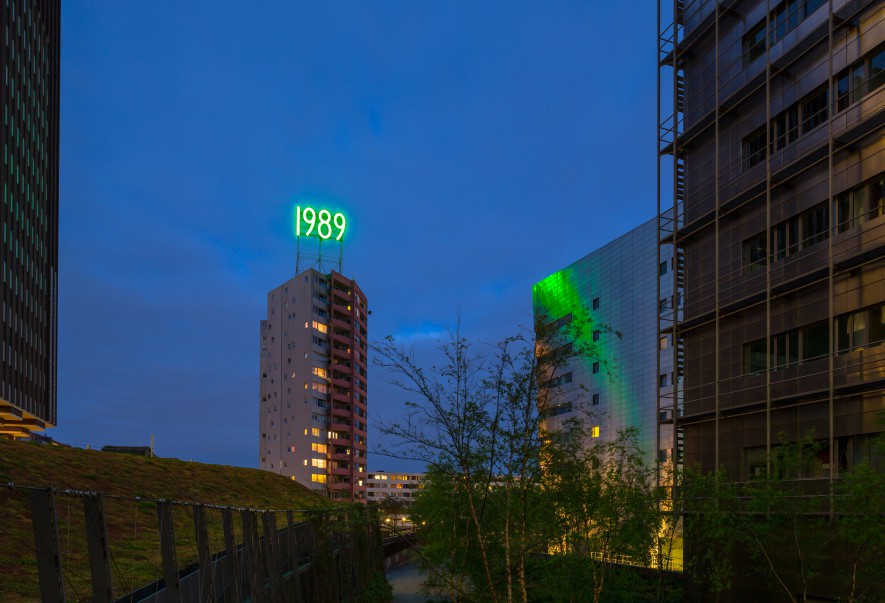 On Thursday 16 April Sculpture International Rotterdam (SIR) celebrates the return of the artwork 1989 by John Körmeling with the tenth edition of the Z-Files, Art and the City in LantarenVenster. The famous neon artwork on the roof of the Hillekopflat in Rotterdam South has been lying flat on the roof for almost three years. An audit of municipal management proved the foundation to be unreliable and the finances for recovery took a long time, but at the beginning of February this year the work was finally restored to its former glory. In this Z-Files including a conversation with John Körmeling about 1989 and other work from his oeuvre and the presentation of his latest work, Frogsichord. This rootcavecimbel is initiated by the composer Charlemagne Palestine.

The return of 1989 in the street scene of Rotterdam South after years of absence is the reason for this edition of the Z-Files. 1989 is the year of construction of the Hillekop apartment, designed by Mecanoo. John Körmeling, originally an architect, marked this year with green flashing neon numbers on the roof of the apartment. 'The year was placed on the roof of the Hillekop apartment in 1991, from where it has been denying time ever since. Indeed: "1989" is a steering clock or calendar - but also a light year; a birth announcement and an unintended historical lesson about that magical year in which the wall fell and history came to an end according to the American neo-conservative political scientist Francis Fukuyama. " (from the Essay that Moosje Goosen wrote about 1989 for SIR)

De Z-Files in LantarenVenster, a location overlooking 1989, consists of a spoken column by Lauran Schijvens (designer and art historian); an interview Michelle Provoost en Wouter van Stiphout with John Körmeling; and a concert by composer and performer Charlemagne Palestine op the Pythagorean Frogsichord, a harpsichord made by Körmeling on the basis of two new tone systems; one based on counting a surface and one based on counting a volume (our known 'do re mi' counts a length). Finally, the return of 1989

John Körmeling (Amsterdam, 1951) studied architecture at the then Technische Hogeschool Eindhoven in Eindhoven, where he still lives and works. His uncompromising thinking often made his work impracticable. 'His work - buildings, constructions, sculptures, solutions for spatial issues, whether executed or not - responds to (and often acts against) spatial planning in the Netherlands, which leaves no administrative desire undefined. Körmeling is like a wolf who knows how to blow a boarded-up plan in the same breath, to put a simple idea against it. (M. Goosen for SIR).

For the parking problem in downtown Utrecht, Körmeling designed a Ferris wheel for cars in 1999, the Drive-in Wheel; and as a lighting on Rotterdams Binnenwegplein he once invented a chewing gum ball machine. The fluorescent chewing gum slices that would be stuck everywhere on the sidewalk tiles in no time had to provide the lighting for the square. Another design for Rotterdam by him is a hefty neon direction indicator TO THE SEA, a work that (until now) has not been realized. Körmeling completed in 2008 Turning House at a roundabout in Tilburg where the cars rush past. Körmeling also became familiar with Happy street, with which he represented the Netherlands at the World Expo in Shanghai in 2010.

Z-Files, Art and the City

Z-Files is a series of programs from SIR and BKOR (Visual Arts & Public Space) in which art, public space and the city are addressed through lectures, interviews, workshops and excursions. This program highlights the special collection of works of art in the public space of Rotterdam and examines current developments with regard to art and the city. SIR and BKOR are programs from the CBK Rotterdam.