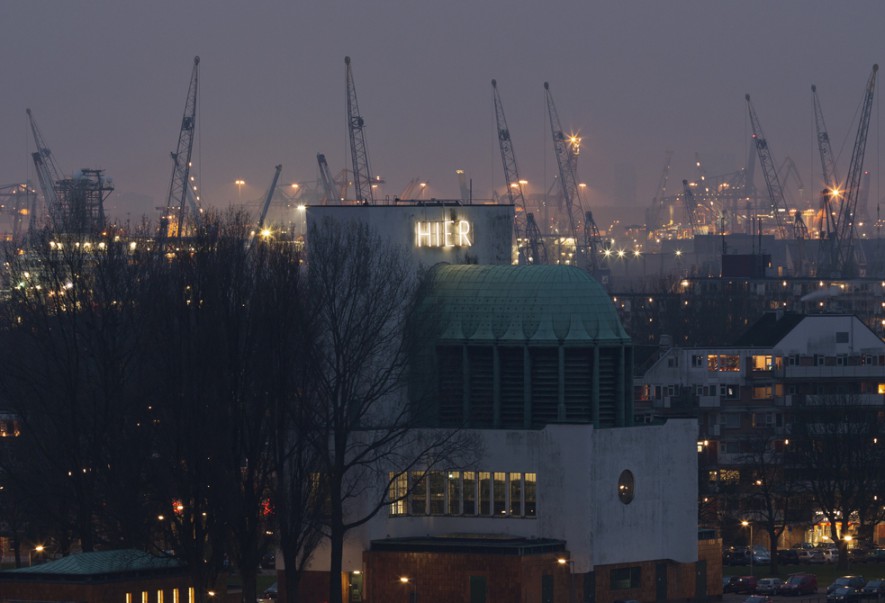 HERE / THERE in the Kunsthal

On February 14, 2017, the Maas Tunnel celebrates exactly 75 year. On the occasion of the 75 anniversary of Our tunnel in collaboration with the municipality of Rotterdam, the Kunsthal Rotterdam is devoting an exhibition to the oldest traffic tunnel in the Netherlands. The artwork also has a special role to play in the exhibition HERE AND THERE, that artist Vesta Kroese realized in 2011.

The neon artwork HERE AND THERE van Vesta Kroese was from 2011 to 2016 on the ventilation buildings of the Maas tunnel on both banks of the Maas. On each side the neon work switches back and forth in irregular alternation between the words 'HERE' and 'THERE'. Kroese made her work for CBK Rotterdam.

She said about her work: “The two identical ventilation buildings of the Maas Tunnel are theatrical and stately opposite each other as if they are in a deep conversation while keeping watch. In the evening, however, they completely disappear in the dark. By the letterwork HERE AND THERE the buildings are illuminated in the evening hours and the dialogue between the two banks is strengthened. "" Every day we make the choice where we want to go. Then the question arises as to whether we can actually be mentally present with our attention where we decide to be. In addition to this personal mental and physical dilemma, the work can also be read at city level related to themes such as identity, connectedness and equality. ”

The neon work can be seen in the exhibition from 14 January to 23 April 2017 Our Tunnel in De Kunsthal. The work will then be given a new place on the banks of the Maas. The video registration that was specially produced for the exhibition about this work (by Vesta Kroese and Christian van der Kooy) was made possible with financial contributions from Stroom Den Haag and CBK Rotterdam.