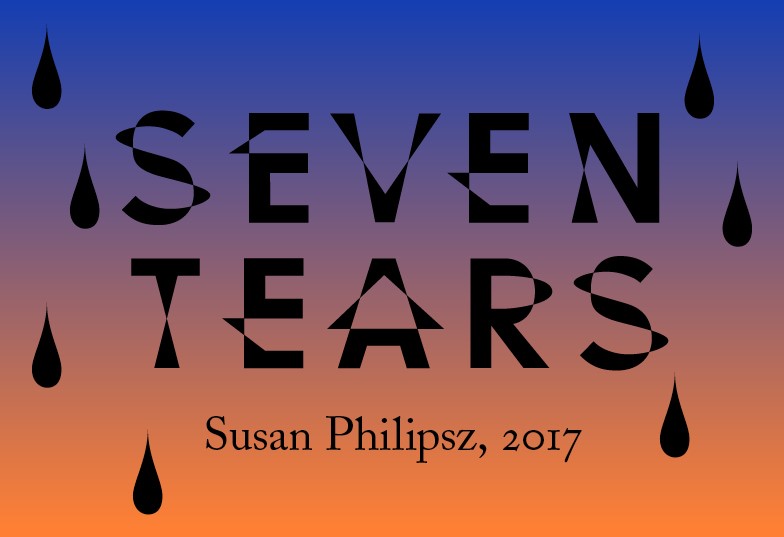 On Thursday 23 March, a new sound artwork by the Scottish artist Susan Philipsz is unveiled that was specially made for the square under the Erasmus Bridge. The work is done through seven speakers scattered on Willemsplein Seven Tears to hear: a piece that the artist based on the composition Pavane Lacrimae by the Dutch composer Jan Pieterszoon Sweelinck (1562 - 1621).

Through the carefully distributed, specially designed speakers, the sounds and fragments of music mix with the sounds of the city. The sound landscape so remarkably unobtrusively accompanies the passers-by who walk under the bridge along the Maas and plays every evening during sunset. Seven Tears was commissioned by Sculpture International Rotterdam, and is an extension of the SIR collection.

Unveiling and Z-Files #18
Prior to the unveiling of Seven Tears a lecture and interview with Susan Philipsz takes place in the auditorium of Museum Boijmans van Beuningen. In this 18e edition of Z-Files, Art and the City gives Philips a presentation about the work Seven Tears that she designed specially for Willemsplein, after which Noor Mertens (director of Kunstverein Langenhagen and adviser SIR) talked to Susan Philipsz about her motives and oeuvre. After the Z-Files follows the unveiling of the artwork on Willemsplein.

Location
At first sight, Willemsplein seems a remarkable location for Philipsz's work. The Erasmus Bridge, where cars and trams roam over all day and evening, yawning gulls and honking boats is one of the noisiest places in Rotterdam. But this place in the middle of the city noise under the bridge was a perfect location for Philipsz to use Sweelinck's melancholy. Sweelinck is considered the most important Dutch composer of the Early Modern Period, in the transition from Renaissance to Baroque music.

Pavane Lacrimae
Sweelinck in turn based his Pavane Lacrimae on the song Flow My Tears from his contemporary, composer John Dowland (1563 - 1626). This Dowland song, made for lute and singing voice, was very influential at the time. It is one of the first examples of the 'trend' of melancholia at the time, the mood that was written about a lot at the time. This is also often used by Philipsz in her work.

Seven Tears
Philipsz experimented in front of the square under the Erasmus bridge that is bordered by apartment complexes, the Erasmus bridge and the Maas with different sound types. The first string version was followed by a brass version with organ pipes, followed by the final version. In this version, Sweelinck's composition is played by musicians on glasses filled with water. The composition refers to the dripping of tears as a motif, and the element of Baroque lament; which appeals to the idea of ​​happiness as a fleeting emotion. Through the scattering of the music over seven channels, the tones and the ambient noise merge into fragments of sounds and music over time.

About the artist
The Scottish artist Susan Philipsz (1965, Glasgow) has been using sound and music for more than twenty years in her work for public spaces and in art centers. In her work, for which she won the Turner Prize in 2010, she has been re-arranging and interpreting existing compositions or musical pieces for more than 20 years based on the characteristics of the location used. Philipsz investigates the spatial qualities of sound and its emotional and cognitive dimensions. Her recent work often revolves around existential themes such as trauma and sadness.

Susan Philipsz exhibited in countless museums and art centers in Europe and North America. She realized various projects in public space, including on Governor's Island (New York). Philipsz's work has been included in various large art collections, including those from the Solomon R. Guggenheim Museum in New York, The Tate in London and Museum Ludwig in Cologne. Her work is represented by gallery Ellen de Bruijne (Amsterdam) and Tanya Bonakdar Gallery (New York).

From North to South
Seven Tears was commissioned by Sculpture International Rotterdam (SIR). SIR is the international program for art in the public space of CBK Rotterdam. The work is part of the international image collection of Rotterdam. This artwork is also the prelude to SIR's leap from the center over the river to Rotterdam South. SIR is developing a multi-year program for Zuid that makes use of all the possibilities that art and the city offer, with the area itself as the driver. The program includes expanding the collection with permanent and temporary artworks, research projects, interventions, Z-Files and an international triennial organized. All this under the working title Paleis Maashaven.

Colophon
The CBK Rotterdam programs BKOR en Sculpture International Rotterdam collaborate intensively to strengthen and renew the Rotterdam public space. They organize regularly Z-Files about art and the city in which art, public space and the city are addressed through lectures, presentations and excursions. Goal of Z-Files (where the Z refers to The destroyed city from Ossip Zadkine and the controversy surrounding the possible relocation of this work in 2014) is to bring attention to the special collection of artworks in the public space of Rotterdam and to highlight current developments in the city. Z-Files, Art and the City #18 is organized by Sculpture International Rotterdam and Museum Boijmans van Beuningen. Seven Tears is made possible in part by the municipality of Rotterdam.

Z-Files #17: Frans de Wit Visit - including transport, lunch and lecture - to the Windshield Caland Canal (1985) and the Vierkant Eiland in the lake (1996) by Frans de Wit
Sculpture International Rotterdam Sculpture International Rotterdam (SIR) Sculpture International Rotterdam is involved in the management and renewal of a unique international image collection of more than 50 public works of art on the so-called main lines of the city. In addition, SIR annually establishes an extensive activity program with performances, films, temporary sculptures and research in the field of art
Z-files XL: the unique art collection of Rotterdam Multi-day event about artworks in the Rotterdam street scene
Z-Files #16: Holes in the wall Holes in the wall is a film about the collaboration between artists and architects in the creation of monumental art in public space during the reconstruction period.
Z-Files #15: Bild, or ...? In Z-Files #15 a lecture by Willem Oorebeek on the occasion of the new SIR edition.
Z-Files #14 and unveiling of the Louis Davids monument A Z-Files following the relocated monument for the Jewish singer Louis Davids.
Z-FILES #13 Louis van Roode Z-Files #13 on Thursday 29 October in the foyer of the Rotterdamse Schouwburg.
Z-Files #12 Art and the City, Free Looking ahead, visions and some flashbacks from Art and the City
Z-Files #11: Street Art - Now & Beyond The 11e edition of the Z-Files is about Street Art.
Z-Files # 10: 1989 - John Körmeling On 16 April, SIR celebrates the return of work 1989 op Zuid with a Z-Files over and with John Körmeling.
Z-Files, Art and the City In the Z-Files art, public space and the city are discussed through lectures, presentations and excursions.
Z-Files #9: It's Never Too Late to Say Sorry at Art Rotterdam Sculpture International Rotterdam presents during Art Rotterdam: Z-Files #9: It's Never Too Late To Say Sorry
Z-Files #8: Looking For Europe In the 8e edition of the Z-Files on Thursday 29 January, BKOR and WORM go 'Looking For Europe' in a talk show with films and guests.
Z-Files #7: Apples from Kees Franse The 11e Z-Files takes place on December 7, following the recently renewed 'Appels' by Kees Franse.
Z-Files # 6: Breytenbach and Lucebert In response to renovated works by Breytenbach and Lucebert, Ernest van der Kwast talks to Breytenbach and Kamargurka
Z-Files # 5: Erik van Lieshout This edition of Z-Files revolves around the work of artist Erik van Lieshout, and his relationship with Rotterdam South.
Z-Files # 4: The Individual Parallel - Bilderberg Utopia by Willem Oorebeek Unveiling of new work in the SIR collection of visual artist Willem Oorebeek preceded by a mini-symposium.