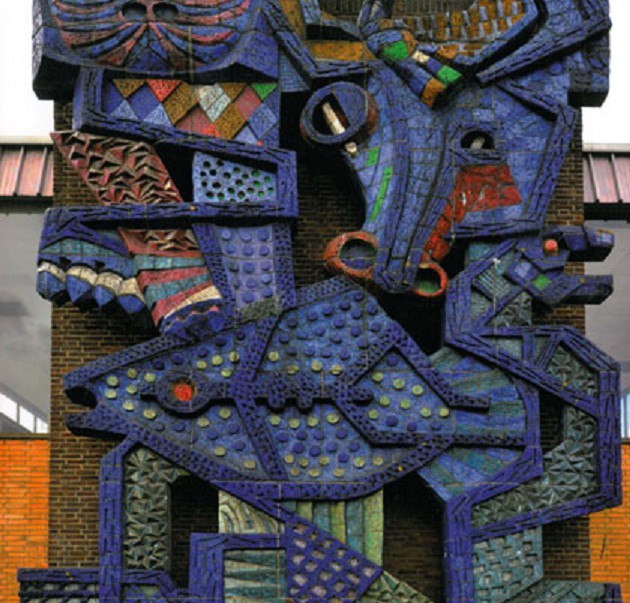 Dick Elffers (1960), The primordial world of the animal compared to the synthetic world, Hoogvliet

On Saturday 9 will be November from 12.00 o'clock The primordial world of the animal compared to the synthetic world by the famous graphic artist and visual artist Dick Elffers revealed at his new location in Hoogvliet. The statue was made in 1960 for the facade of the Shell rubber factory. When this factory was demolished in 2013, Shell, the municipality of Hoogvliet and Center for Visual Arts Rotterdam were looking for a new location. It was found in the center of Hoogvliet. The monumental ceramic work (over 9 meters high and 5,5 meters wide) has recently been restored there. With 'the primordial world', Rotterdam (and the Netherlands) has managed to retain a striking and historically important work: a crown jewel from the period of reconstruction.

The ancient world ...
The characteristic work The primordial world of the animal compared to the synthetic world was commissioned by Shell for the then new rubber factory in Hoogvliet designed by Dick Elffers. This factory was demolished in 2013, but thanks to Shell, the municipality of Hoogvliet and the Center for Visual Arts Rotterdam, the work was given a new purpose and a new owner. The work - originally made by the Royal Porceleyne Fles (known from Delft Blue) - was carefully dismantled, reconstructed and restored on the façade of the new building of housing association SOR, in the center of Hoogvliet. Thanks to financial and material contributions from twenty smaller and larger partners, the restoration company Art Conservation managed to give the artwork of Dick Elffers a second life.

Collect
The dynamic of the city exists by the grace of demolition, renovation and new construction. The pace at which post-war reconstruction architecture falls prey to the demolition hammer is threatening many works of art. The Center for Visual Arts Rotterdam is looking for new owners for the most graceful and striking works of art that are in danger of disappearing from public spaces. This rearrangement of endangered artworks in public space - demolition - is a new spearhead of the Rotterdam Center for Visual Arts. Relocating Elffers' work not only proves that there is broad social support for that enterprise, but also that 'old' artworks can make a special contribution to the urban embellishment of the twenty-first century.

Dick Elffers
Dick Elffers (1910-1990) followed his training as a graphic designer at the art academy in his native city of Rotterdam, where he was taught by Jacques Jongert and Piet Zwart, among others. After completing his studies, he himself becomes a teacher at the academy. During and after his studies he assists designers Paul Schuitema and especially Piet Zwart, with whom he has worked for seven years and becomes his most important assistant. After the war - he now lives in Amsterdam - Elffers developed into a versatile artist and prominent designer, working for the Rijksmuseum Amsterdam and the Holland Festival, among others. From 1970 to 1976, he works as a monumental art teacher at the art academy in Den Bosch. He received the HN Werkman Prize and the State Prize for Typography for his work, and his work has been included in museum collections.

Publication
The Center for Visual Arts Rotterdam gave the publication on the occasion of the relocation and restoration Dick Elffers - The Original World of Hoogvliet from. Sandra Smets wrote the essay 'The Freedom Triumph of a Space Finder' for this publication. The booklet was designed by Tymen Cieraad.

The load carrier The relocation of 'de Lastdrager' is celebrated on November 13. The statue is revealed by Mayor Aboutaleb.
Unveiling 2 window stories Unveiling of 14 new artificial windows, designed by Milou van Ham and Jan van de Pavert.
Monument for the guest worker As a tribute to the guest workers, a monument to the guest worker in Rotterdam will be unveiled on Sunday 10 November.
Monument for the Holland Pop Festival 1970 More than 40 years later, Kralingen receives a monument in honor of the Holland Pop Festival that took place in 1970 in the Kralingse Bos.
Unveiling of the Rotterdam Slavery Monument The slavery monument was unveiled on Sunday afternoon 16 June.