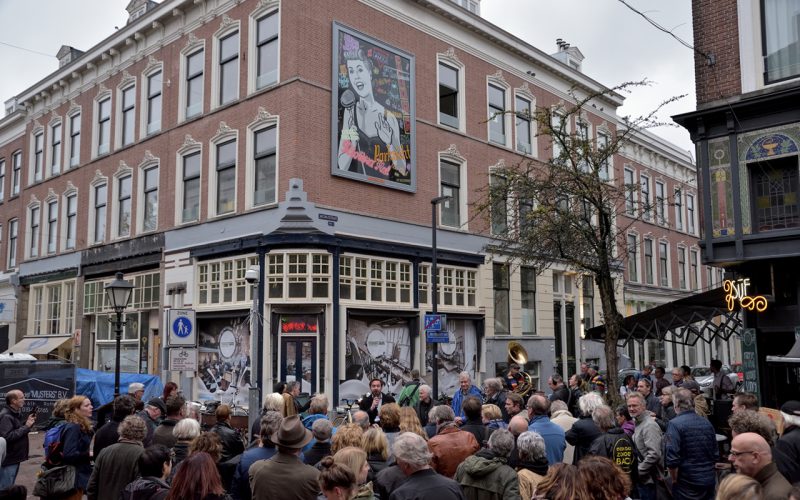 Following the silent disc (known from, among others, festival De Parade) Art Index Rotterdam and CBK Rotterdam organize one on Friday 15 November silent walk. 40 headphones are ready for the walkers. Everyone who walks along the comic paintings on the Oude Binnenweg hears that evening, among other things, the voice of Wilbert Plijnaar through the speakers of his or her headphones.

Illustrator, cartoonist and screenwriter Wilbert Plijnaar is the side kick during this walk on this Friday evening; the Comic (f) Listen audio tour.

Plijnaar started his career as a draftsman and writer for the weekly magazine Donald Duck. Halfway through the '70 he moved to comic magazine Eppo and he co-authored comics such as Sjors and Sjimmie en Clear. The creative centipede also made comics such as Koen Kalkoen, came up with concepts for other comic makers and guided young talent. Since 1995 he works in Los Angeles for the studios of Warner Bros, 20th Century Fox and Dreamworks, among others. He has collaborated on numerous successful cinema films, including Despicable Me, The Lorax, How to Train Your Dragon, Planet 51, Over the Hedge, Jimmy Neutron, Osmosis Jones and the first three Ice Age movies.

In November Plijnaar comes back to his home city of Rotterdam at the invitation of Cross Comix. As a contribution to Cross Comix, CBK Rotterdam made the arrival of Plijnaar possible, partly due to the fact that the portrait on the Oude Binnenweg - a portrait of his aunt Rita Reys - has recently been completed by the special lighting of the work .

Together with Anne-Marie Ros van Art Index Rotterdam Plijnaar will show all works on the jazz route this evening. Through his years of experience in the international comic and comic world, his imagination brings surprising jokes and stories, even while walking. Passers-by will wonder what that group of hikers do with headphones and can also be amazed by the many jazz portraits of the Oude Binnenweg.

Comic (f) Listen audio tour around and on the Oude Binnenweg
Friday 15 November during the Kunstavond XL
Collecting 19: 15 at TENT Rotterdam on Witte de Withstraat

This project has been realized in collaboration with Cross Comix