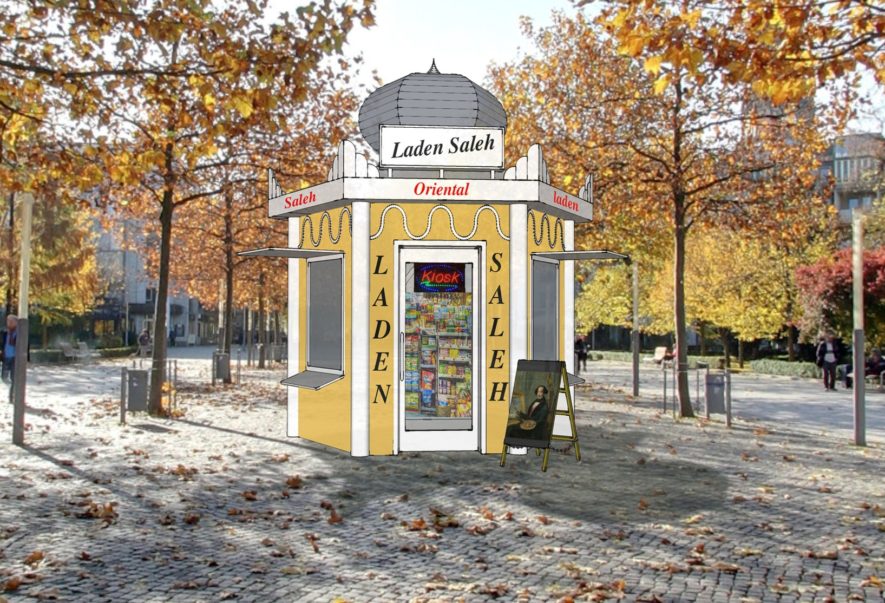 CBK Rotterdam considers an international position of Rotterdam visual artists and visual arts important. We therefore maintain close ties with art organizations abroad and try to encourage as many visual artists as possible in the internationalization of their professional practice. Simon Kentgens realized his Laden Raden Saleh project - a contemporary kiosk in Dresden as a result of the Dresden-Rotterdam exchange project, in collaboration with the Kulturamt Dresden and the Goethe Institut. He placed a kiosk in the public space of Dresden (Neustadt), the kiosk is based on the kiosk of Raden Saleh in Maxen (D). The opening of the kiosk is on 2 June and the kiosk will function for a month.

A project by Simon Kentgens

Loading Saleh is a temporary kiosk in the heart of Dresden's Neustadt district. It is inspired by the story of the Indonesian painter and prince Raden Saleh, who lived and worked in Dresden for several years from 1839 to 1848. In Dresden he was called 'The Black Prince'. His exotic appearance and his oriental painting style made him very successful and popular with the Saxon kings and artists. In today's Dresden his history is almost completely forgotten. The only thing that reminds him is a kiosk or pavilion in Maxen, a small village outside the city.

Loading Saleh is inspired by this kiosk and brings it to life, in the middle of Dresden's Neustadt, the Jorge-Gomondai-Platz. It revives the historical presence of painter prince Councils Saleh in the city and at the same time poses questions about identity and Orientalism in the present.

The kiosk sells small oriental goods and groceries. It's a work of art that blends into everyday life, but also deals critically with Dresden's orientalist heritage. It views the history of Dresden as a long-lasting development in which the exchange of cultures has constantly influenced the city's life.

The project aims to reach all the people who pass by Albertplatz every day. In addition, there is a series of events that invite associations and artists to exchange ideas on current social issues. Thus, the kiosk becomes a place of encounter, exchange and reflection on the city of Dresden.

Loading Saleh is located on Jorge-Gomondai-Platz (between Hauptstraße and Albertplatz) in Dresden's Neustadt district from 2 June to 30 June. The kiosk will have daily opening hours and host several small events.

The opening presentation will take place on 2 June at 16: 00 with Banda Internationale (small line-up), a greeting by the cultural mayor Mrs. Annekatrin Klepsch and Ove Lucas, director of the CBK Rotterdam.

For further information and updates on the events: www.ladensaleh.de