While Art Rotterdam Week The Rotterdam Photo Festival also takes place at Deliplein, the central square at Katendrecht within walking distance of the Nederlands Fotomuseum. The festival shows work by photographers with different practices and includes installations, video works and analogue work. CBK Rotterdam is present at Rotterdam PHOTO with the exhibition FAKE | TRUTH and selected work by Annette Kisling, Sandim Mendes and Naomi Modde: artists with a strong bond with Rotterdam. 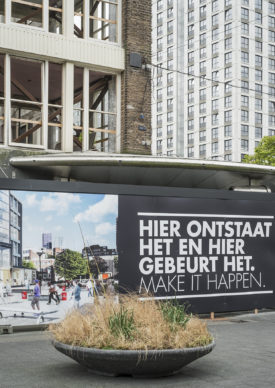 Annette Kisling is a photographer and lives in Berlin and Leipzig. In photo series she describes her experiences with the architecture that surrounds her. Her focus is, among other things, on the modernist architecture of the 20 century. In 2002 and 2003, Kisling spent a year in Rotterdam as an artist-in-residence. She came across a richly varied and vibrant city. During her work period, several photo series were created that portray different areas within Rotterdam. Years later, in 2017, Annette Kisling returns to Rotterdam. The city had changed a lot in the meantime. These changes become visible in the Kisling presentation at Rotterdam PHOTO.

Investigates in her photographic work Sandim Mendes the concept of identity in and between cultures. Her work focuses on strong social aspects while drawing inspiration from her immediate environment and living conditions. Mendes recently showed her work in a new installation in TENT in which she reconstructed the stories with which her grandfather passed on stories as a storyteller and provided the future with a life elsewhere.

Mendes: “In this series of works I play with the idea of ​​a fictional reality. I show something that can be accepted as something real, but is that also true? For example in the self-portrait series. As a maker, I use myself as a model in these series (except Masq en Untitled= color photo), x on x in a different shape / clothing / gender. Which hopefully raises questions about what identity exactly is, especially looking at culture, gender and its stereotyping. And lastly, for me, photography and its evidential value and archival qualities play the most important role in creating this fictional reality. ” 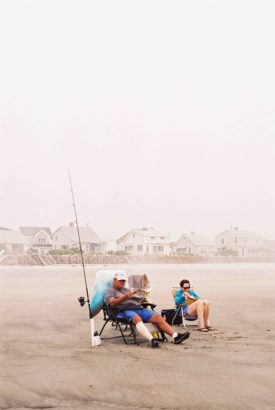 Naomi Modde goes in her photographic work in search of the connection between people. To what extent do we feel connected or are we alienated from each other? What connects us or creates a distance? In our neighborhood, our city, our country and in the world. In different series, this theme comes up in various ways. In Modde's most recent project, De Bootbewoners, she investigated during the OFF-Blaak project to what extent the residents of the houseboats in the city triangle of Rotterdam feel 'neighbors' with the people in the new residential towers. During Rotterdam Photo, Modde shows her analogue photo series Zeevlam.

Modde: “As a photographer, I attach great importance to the sincerity of images. With the documentary impact that my work has, I focus on the 'real person'. Who we are in all our purity. As I find someone in the moment, I want to capture that person and transfer it to the public. By working with film, I get the chance to get close to my subject without losing the moment. You often scare people if you want to approach them with a large lens. They shoot out of their natural position and begin to pose. With film rolls, the people I portray are less intimidated in my experience, which means there is a faster dialogue on the same level.
Suddenly we are no longer strangers to each other on the beach, but they slowly show themselves and welcome me for a fraction of a second in their lives. ”

In a World We Can't See On Thursday 25 January TENT opens the group exhibition In a World We Can't See
Coolstof x TENT: Maurice Meewisse - BLOCK BETON Blok Beton is COOLSTOF's fourth project, a series of performances realized by five Kunstblock institutions in the Cool district, around Witte de Withstraat.
Z-Files #19: Cape Color On Friday 25 August, the completion of 9 ornamental frames on Katendrecht is celebrated with the 19e edition of Z-Files, Art and the City about Cape Color.
Young photography talent on Rotterdam Photo This year CBK Rotterdam presents two young and promising photographers at ROTTERDAM.PHOTO.