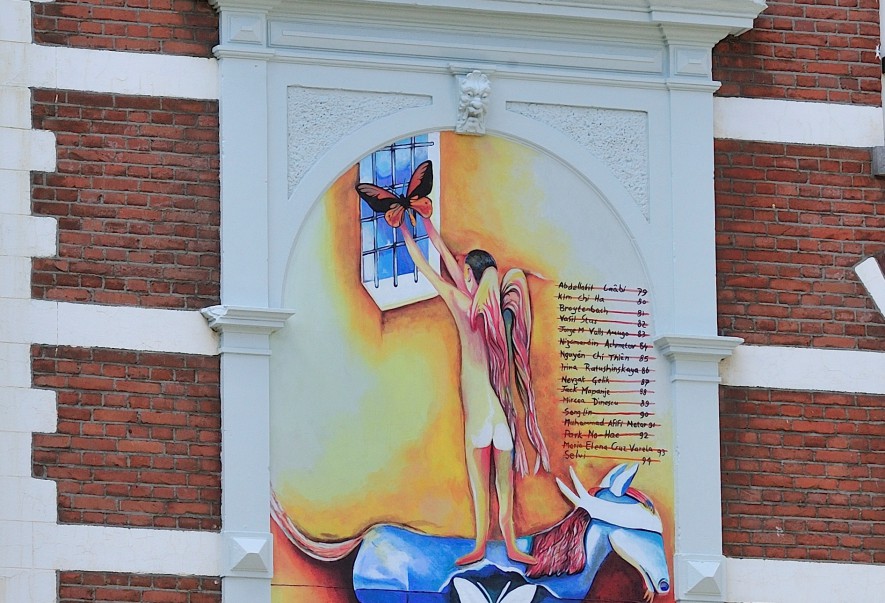 In this special edition of the Z-Files Ernest van der Kwast talks to Breyten Breytenbach (writer and artist, South Africa) about Breytenbach's work. Van der Kwast discusses Lucebert's work with Kamagurka (ao writer and artist, Belgium). This one Z-Files is being organized as a result of the renovation of the murals of both Lucebert and Breytenbach (both in the Gaffelstraat in Rotterdam) and in collaboration with Poetry International Rotterdam.

Murals
For years now, two remarkable murals by Breyten Breytenbach and Lucebert have been adorned on Gaffelstraat in Rotterdam's Old West district.
In the wall painting of the South African poet and painter Breyten Breytenbach (Poetry International, 1992) art and politics come together. The work depicts a captive writer who longs for freedom. Next to the image is a list of names of writers who were imprisoned for their work. This painting has everything to do with the poetry festival Poetry International, which at the time awarded an annual prize to a poet who was held captive for his literary activities. His name was added to the ornament list and crossed out when he was released. Breyten Breytenbach received the prize in 1981; a year later he was released after being imprisoned for seven years. Every prize winner received a work in public space at the time.

The painting of Lucebert - The story is so good that it is not over yet (1994) - has a line from his poem Timetable and gender table. Lucebert spoke in favor of freedom of expression, in particular that of writers. Lucebert and Breytenbach were close friends and got to know each other at the Poetry International Festival.

Art in the public space
Visual Arts & Public Space (BKOR) regularly provides the ornaments lists in the city with new works and restores the old classics. The works of Lucebert and van Breytenbach were recently restored. This was a direct reason for an edition of the program Z-Files, Art and the City devoted to both double talents: Lucebert and Breytenbach were both painter and poet. Poetry International and CBK Rotterdam invited Breyten Breytenbach for this occasion to come to Rotterdam. He will be the guest of honor on this special evening.

"Every person is a hidden poet", with these words the poet Breyten Breytenbach christened the large, stately plane tree on the Westersingel as a monument for free thoughts during the Poetry International Festival in 1986. The tree was renamed 'Tomb of the Unknown Poet'. On 8 October 2014, almost 30 years later, Poetry International places a plaque next to the tree that gives the tree the status of an official monument.

The placement of the plaque is celebrated on 8 October at 17.00 o'clock in the presence of Breyten Breytenbach. Subsequently, there is a festive program in the Van Gennep bookstore on Oude Binnenweg.

Captivity
During his imprisonment in South Africa (1975-1982), Breytenbach wrote a story in which he spoke about 'the grave of a poet'. A kind of meeting place where poets could undertake a 'pilgrimage' to 'meditate' there. Because, he thought, every person is a hidden poet. So somewhere in the world there must be a place where one can let his or her thoughts run free. After his release, the story of Breytenbach, in collaboration with the organization of Poetry International, was given a place on the Westersingel.

Z-Files, Art and the City is a series of programs from SIR and BKOR (both part of the CBK Rotterdam) in which art, public space and the city are discussed through lectures, presentations and excursions. The aim of the program is to bring attention to the special collection of artworks in the public space of Rotterdam and to highlight current developments in the city.

Z-Files newspaper #2 Z-Files newspaper #2, Art and the City. Can also be read online
Z-FILES #13 Louis van Roode Z-Files #13 on Thursday 29 October in the foyer of the Rotterdamse Schouwburg.
Z-Files #12 Art and the City, Free Looking ahead, visions and some flashbacks from Art and the City
Z-Files #11: Street Art - Now & Beyond The 11e edition of the Z-Files is about Street Art.
Z-Files # 10: 1989 - John Körmeling On 16 April, SIR celebrates the return of work 1989 op Zuid with a Z-Files over and with John Körmeling.
Z-Files #9: It's Never Too Late to Say Sorry at Art Rotterdam Sculpture International Rotterdam presents during Art Rotterdam: Z-Files #9: It's Never Too Late To Say Sorry
Z-Files #8: Looking For Europe In the 8e edition of the Z-Files on Thursday 29 January, BKOR and WORM go 'Looking For Europe' in a talk show with films and guests.
Z-Files #7: Apples from Kees Franse The 11e Z-Files takes place on December 7, following the recently renewed 'Appels' by Kees Franse.
The first Z-Files newspaper is out! The first edition of the Z-Files newspaper appeared in September 2014.
Z-Files # 5: Erik van Lieshout This edition of Z-Files revolves around the work of artist Erik van Lieshout, and his relationship with Rotterdam South.
Z-Files # 4: The Individual Parallel - Bilderberg Utopia by Willem Oorebeek Unveiling of new work in the SIR collection of visual artist Willem Oorebeek preceded by a mini-symposium.