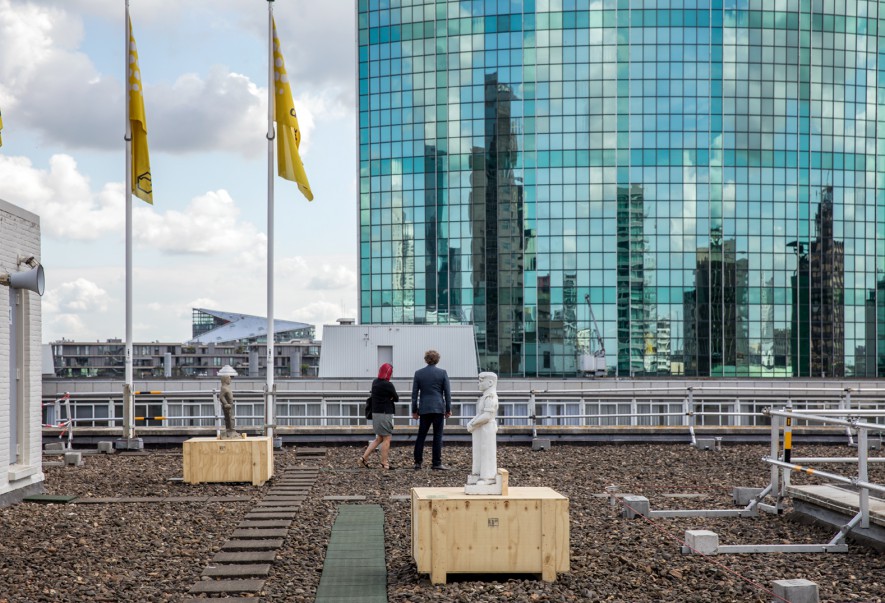 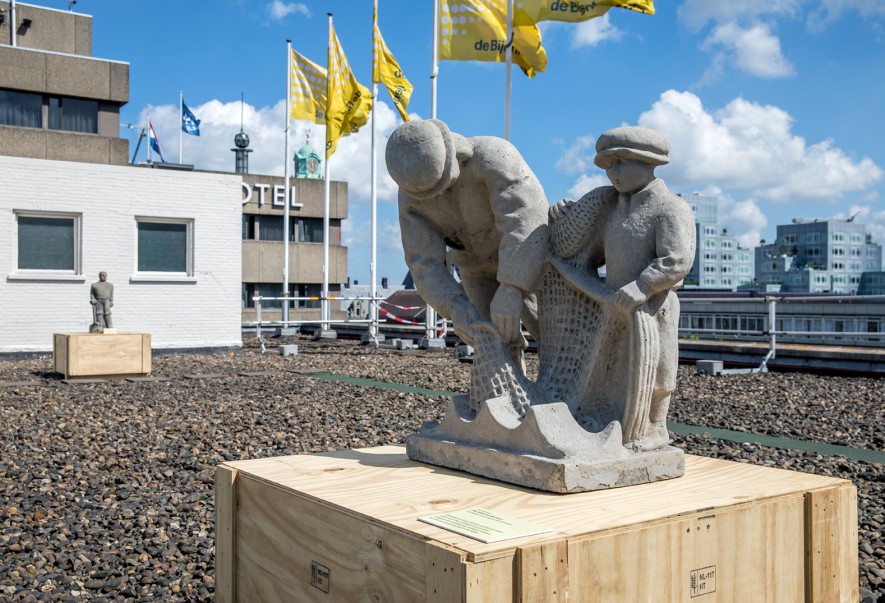 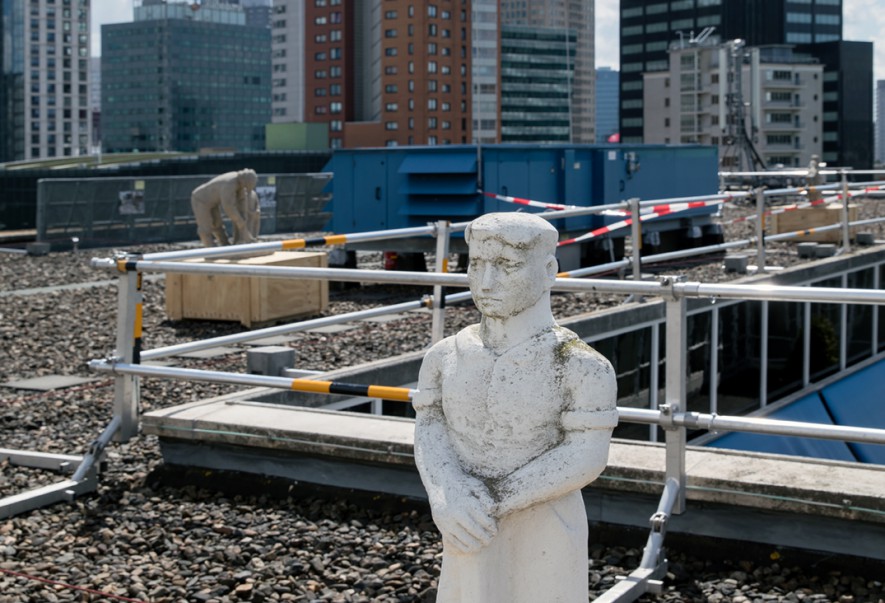 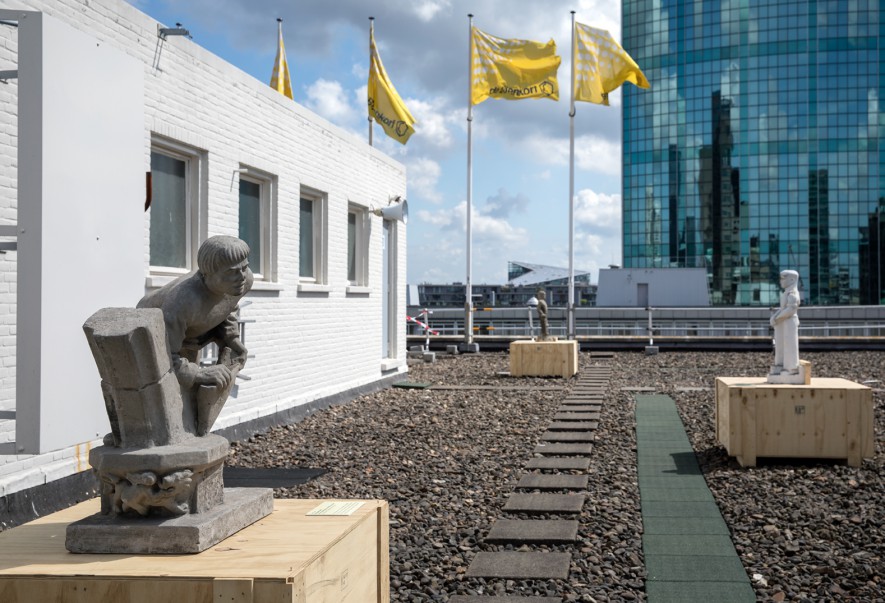 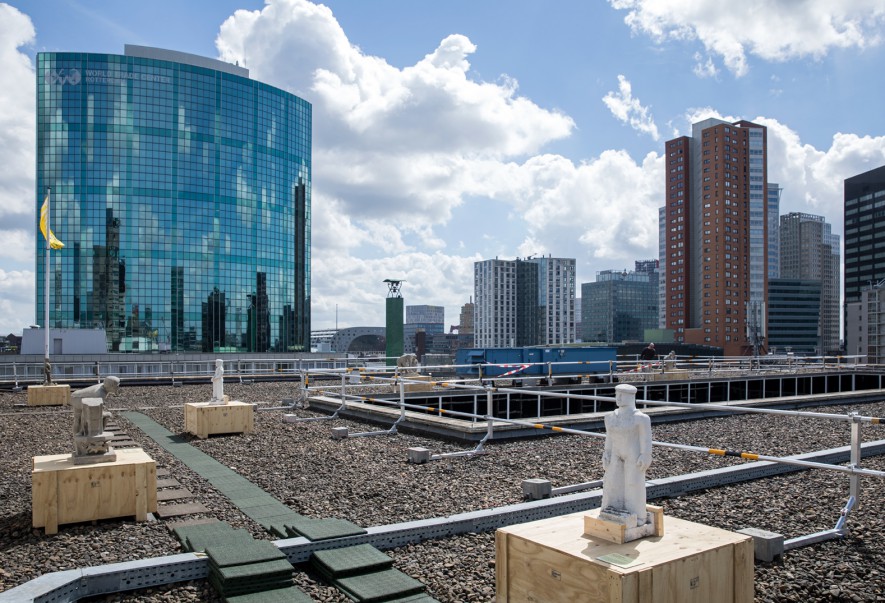 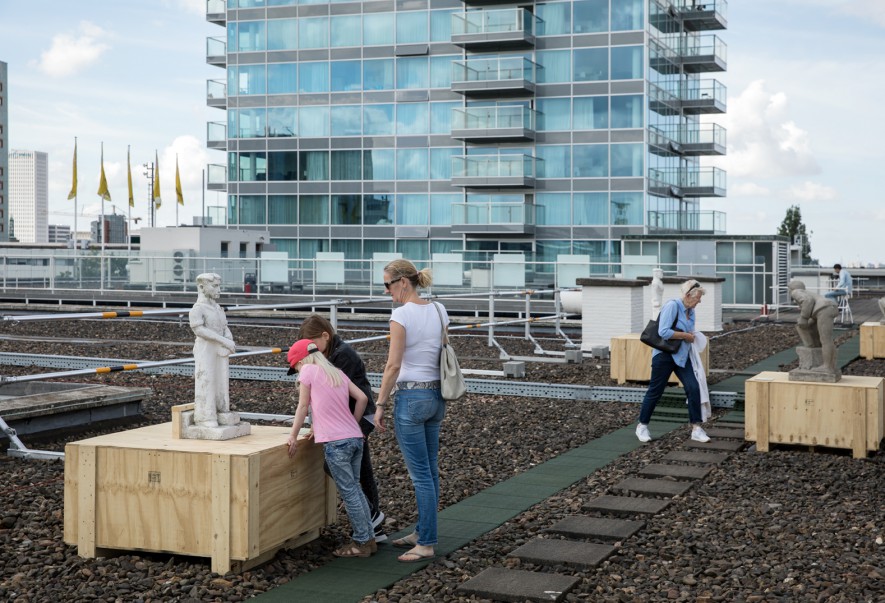 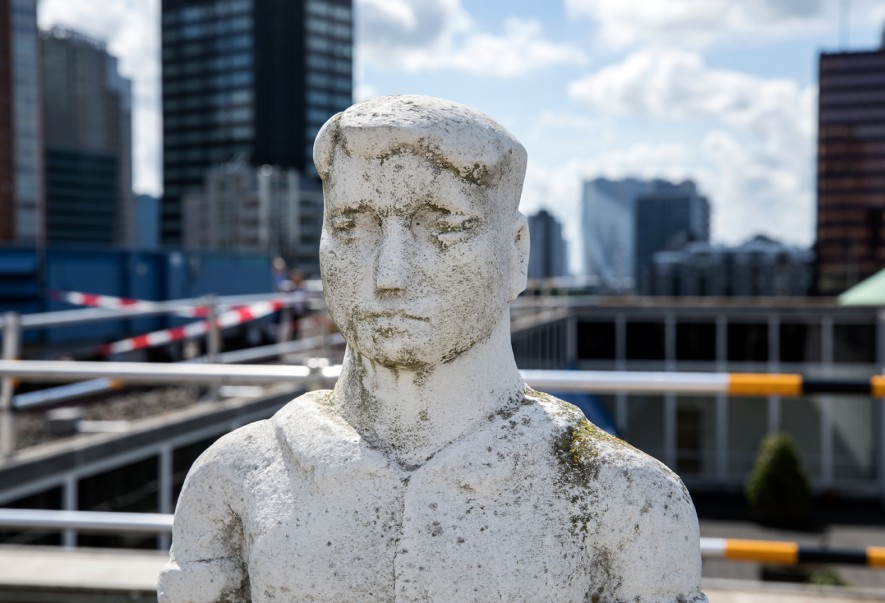 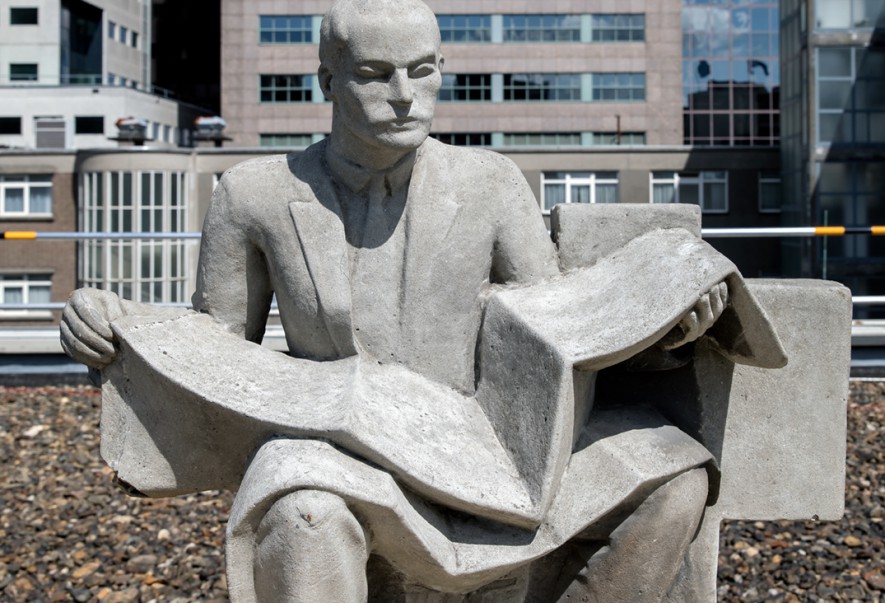 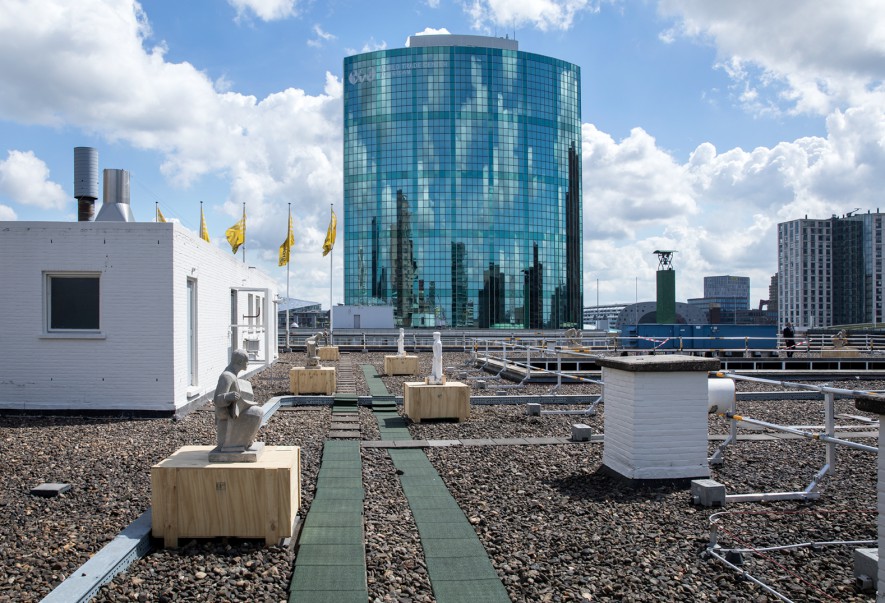 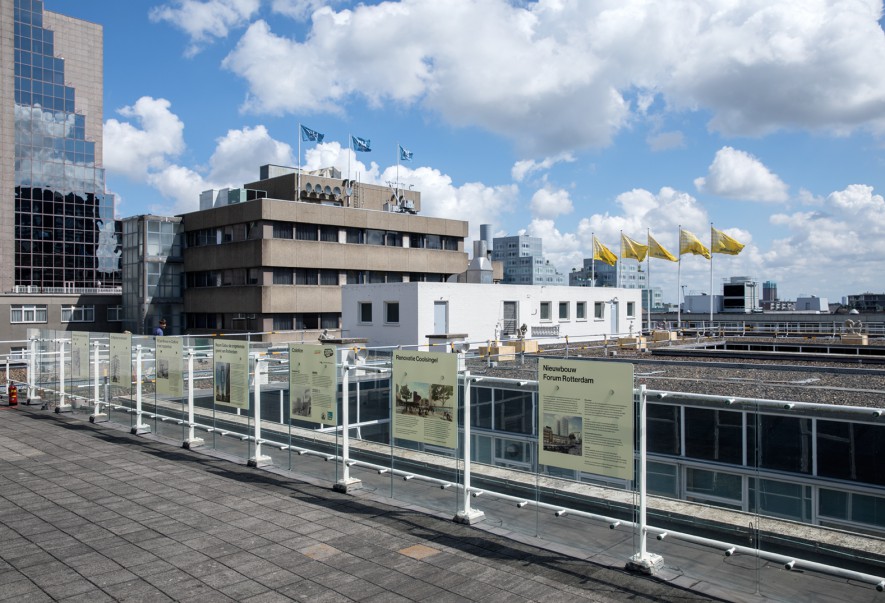 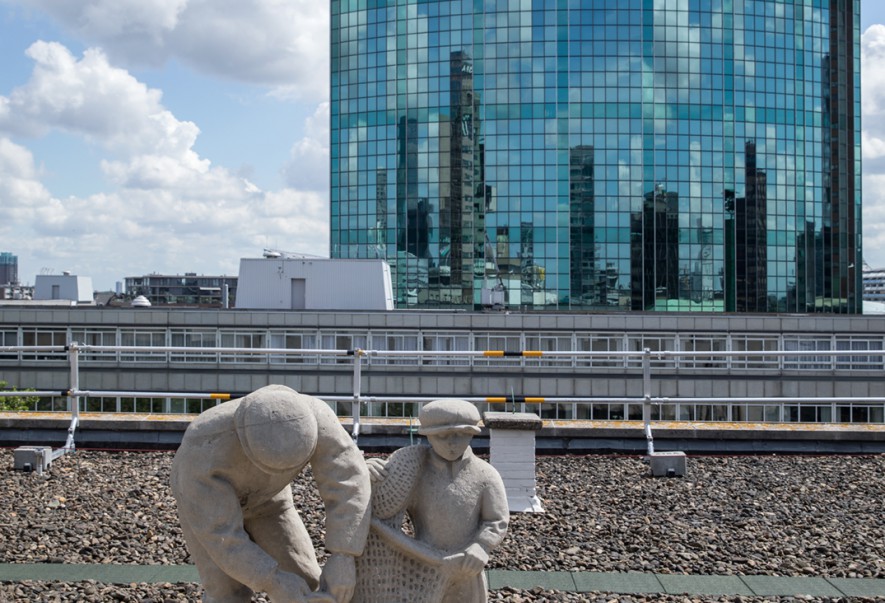 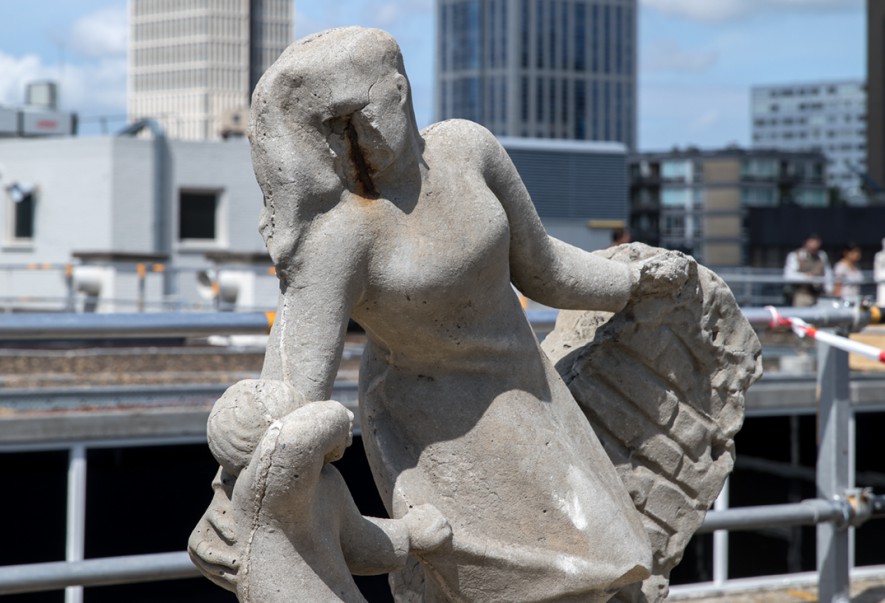 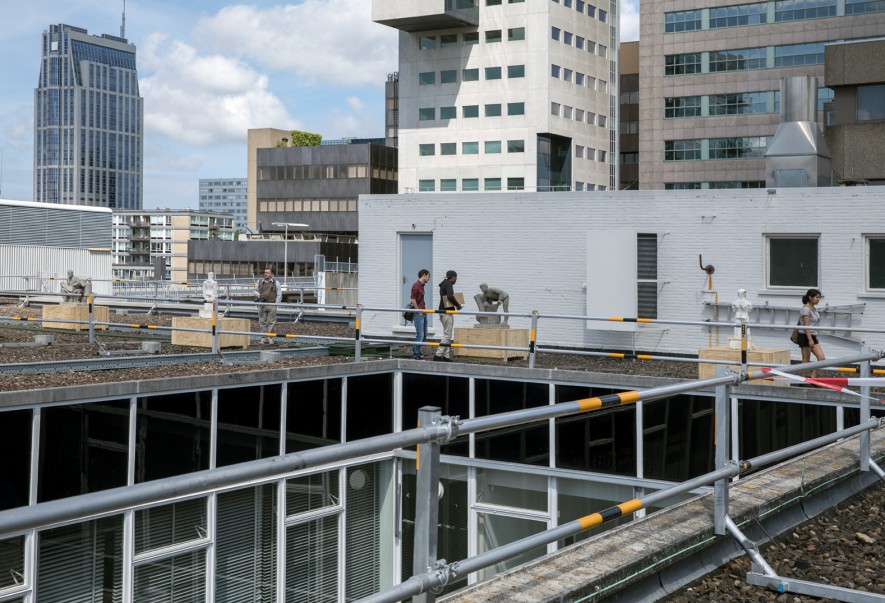 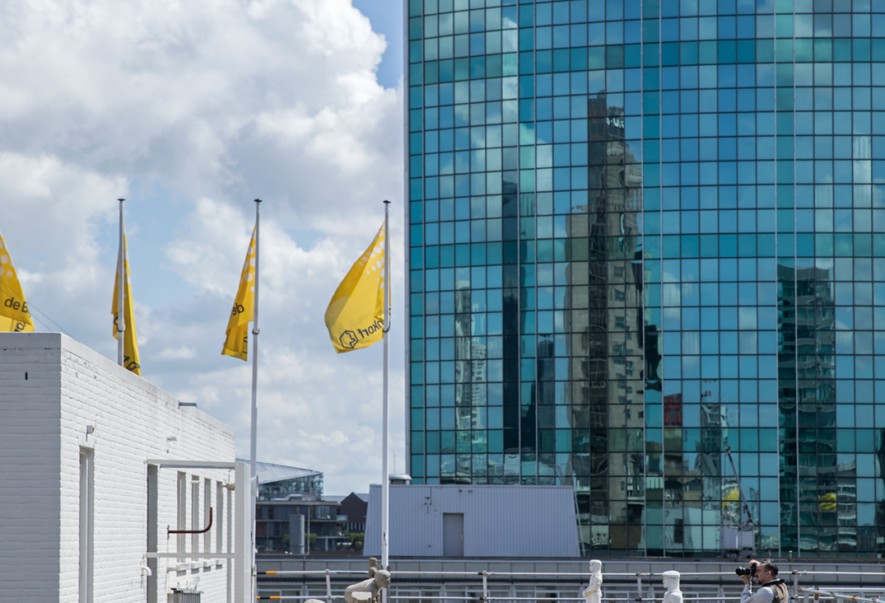 Sculpture garden on the roof of the Bijenkorf

In the context of Rotterdam Architecture Month and on the initiative of the Rotterdam Roof Days A sculpture garden has been installed on the roof of De Bijenkorf. A unique collection of early reconstruction works can be seen in the sculpture garden. A small bronze version of The destroyed city van Ossip Zadkine is exhibited in the stairwell to the roof. The large version of The destroyed city was once given anonymously by De Bijenkorf to the city of Rotterdam.

On the roof: early reconstruction art
Rotterdam has many hundreds of works of art and monuments in the public space. That tradition started in 1940 with a series of sculptures on the Coolsingel. Shortly after the bombing of 14 in May 1940, new artworks were already placed on the Coolsingel. Five sculptures in the sculpture garden show the new heroes of Rotterdam from after 1940: the architect, the stonemason, the rubble reamer and the builders - tough Rotterdammers, who together rebuilt the city. The misery of the bombing was commemorated in stone (Woman and child), and the origin of Rotterdam becomes visible in The fisherman and his son.

In the stairwell: 'the Zadkine'
There is also a small bronze version of the Bijenkorf The destroyed city from Ossip Zadkine. The large version of the famous statue was once given anonymously by De Bijenkorf to the city of Rotterdam. The founders and executives of the group had a great love for the visual arts. De Bijenkorf donated in 1953 The destroyed city to Rotterdam. The artwork by Naum Gabo that stands in front of the store was commissioned by De Bijenkorf, and still belongs to the building. Both artworks are included in the collection of Sculpture International Rotterdam.

Partners
Four of the reconstruction works (The Bodybuilders, The fisherman and his son en Woman and Child) who now stand on the roof of De Bijenkorf were during Uproot Rotterdam temporarily on display in the Museumpark during Rotterdam Viert De Stad! Read more about the role that art played in the reconstruction of Rotterdam in the book Sculptures. Urban embellishment in Rotterdam since 1940 from Siebe Thissen. This temporary sculpture park is realized on the initiative of the Rotterdam Roof Days, with the cooperation of The Beehive, Museum Rotterdam en CBK Rotterdam (BKOR and SIR). The project was made possible in part by the municipality of Rotterdam and Rotterdam Festivals.

BKOR manages and renews the extensive city collection in collaboration with involved Rotterdam residents, companies and institutions. Sculpture International Rotterdam is concerned with the management and renewal of Rotterdam's unique international sculpture collection. These CBK Rotterdam programs work together intensively to strengthen and renew the Rotterdam public space.

Uproot Rotterdam A collection of artworks forms a temporary sculpture park this summer.
Sculptures. Urban embellishment in Rotterdam since 1940 A new book written by Siebe Thissen (head of BKOR) about the reconstruction in Rotterdam and the role that art played in it
Photo gallery uprooted images Uproot Rotterdam