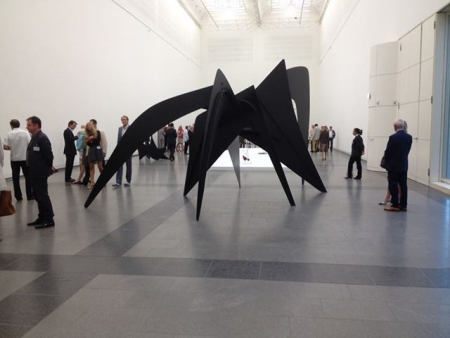 On Tuesday morning 27 August 2013 the sculpture 'the Anteater' is moving (Le Tamanoir) from Alexander Calder temporarily from Rotterdam-Hoogvliet to Düsseldorf where it will be part of the exhibition Alexander Calder: Avant-garde in Bewegung in Kunstsammlung Nordrhein-Westfalen, Düsseldorf. At the start of 2014, the artwork will return to Rotterdam. Because the residents of Hoogvliet have to miss the statue for a few months, they get free access to this exhibition.

The municipality of Rotterdam bought Le Tamanoir in 1965 for the new Hoogvliet neighborhood at Galerie Maeght in Paris. Le Tamanoir is part of the Sculpture International Rotterdam collection, the collection of international artworks in the public space of Rotterdam. Le Tamanoir is the only monumental work by Calder in the Netherlands. Together with the Henry Moore, the Naum Gabo, Erasmus, and the Zadkine in the SIR collection, this work of art is one of the most valuable sculptures in public space in the Netherlands. A team of specialists from Rotterdam and Düsseldorf is preparing the journey and the stay of Le Tamanoir in all details.

Calder on room
Exceptional is that the anteater, a black 'stabile', will now be shown temporarily in a room, without the noise of the city. The Alexander Calder: Avantgarde in Bewegung exhibition highlights the role and meaning of Le Tamanoir within Calder's work. The exhibition focuses on the years '30 and' 40 and in particular on Calder's path to abstraction and his link with the European avant-garde.

Alexander Calder
At the end of the '30 years, Calder became best known for his' mobiles': colored shapes that hang in a delicate balance on a steel wire construction and move by wind or draft. Later Calder also designed the base to which the moving part could be attached. The monumental 'stabiles', including Le Tamanoir, subsequently developed from these stands. Calder was one of the leading artists of his generation and was part of the Parisian avant-garde. He was in close contact with colleagues such as Marcel Duchamp, Joan Miró, Hans Arp, and Piet Mondriaan. In the sixties and seventies, Calder was, together with Picasso and Henry Moore, one of the most sought after artists for images in public space (including in New York, Chicago and London).