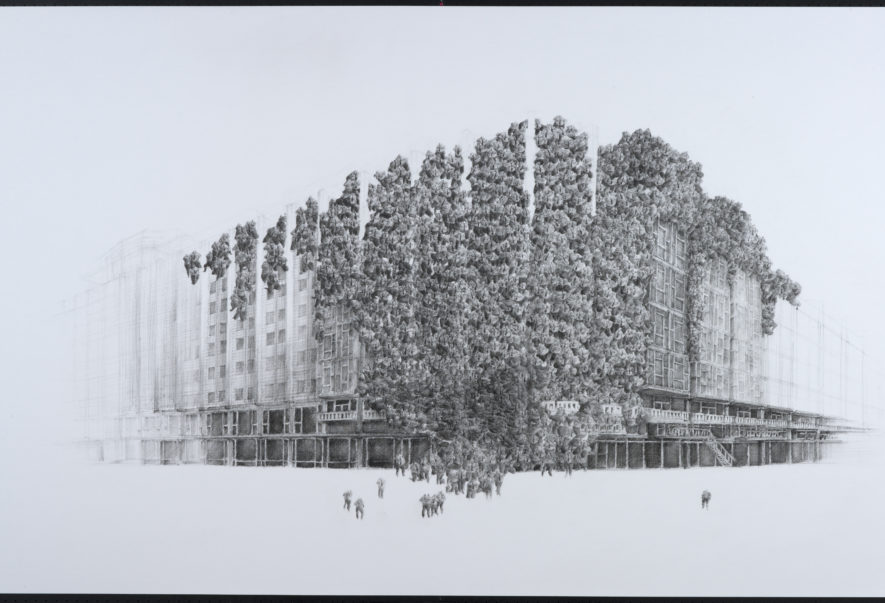 Who was Hugh Maaskant?

The Rotterdam architect Hugh Maaskant made an important contribution to the reconstruction of Rotterdam after the Second World War. Among other things, he designed the Groothandelsgebouw, the Hilton hotel, the Euromast, the apartment buildings on the Lijnbaan and - his last major creation - the Adriaan Volker house on the Maasboulevard. Maaskant had great respect for those who were able to transfer and propagate their knowledge of and love for architecture. To reward these types of activities, he founded the Rotterdam-Maaskant Foundation in 1976.

The result is a series of 10 drawings in which the artists have depicted the building from their own style and personal experience or memory. Looks like this Georg Bohle the Wholesale Building as a place where traders in black suits storm the building like busy bees. Eveline Visser recorded the Euromast, according to her a dream project of the architect himself. She gave the title to her drawing Maas side in the clouds. She depicts the crow's nest as a space shuttle amidst clouds, as an expression of the American Dream in the '60. Marcha van den Hurk drew the Hilton Hotel as a repetition of architectural structures. The 10 drawings are included in the Rotterdam City Archives collection after the exhibition.

The drawings in the exhibition have been made possible by the City Archives and CBK Rotterdam.