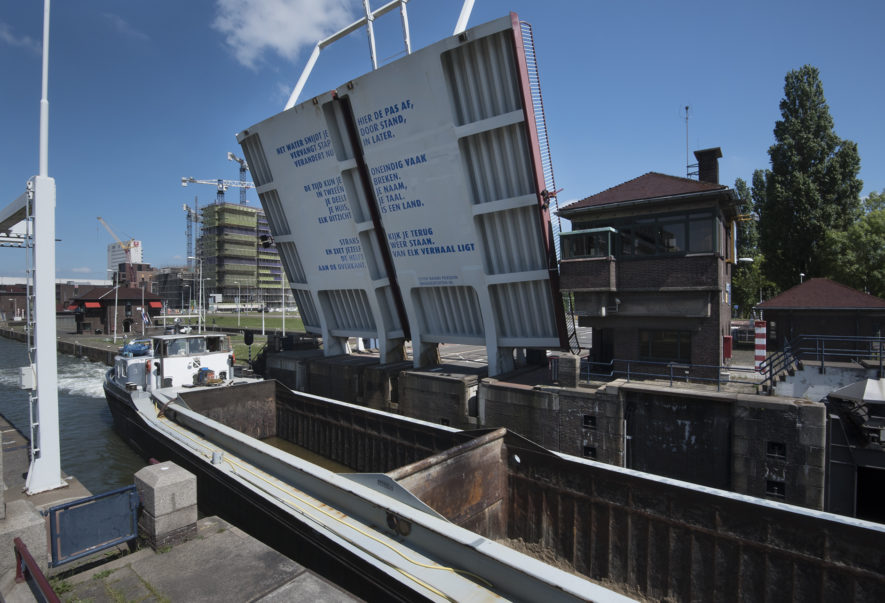 "You will look back and see yourself again."

At the beginning of May, a poem by Ester Naomi Perquin was applied at night to the bottom of the Parkhavenbrug near the Euromast in Rotterdam. The bridge poem can be read every time the bridge opens (more than 150 to 200 times a week.) The design is by (typo) graphic designer Monice Janson. It is the second bridge poem that the open / close_bridge poems initiative of the de Search for Schittering foundation in Rotterdam is realizing. Under, on or near, preferably, all bridges over the Delfshavense Schie, poems by Rotterdam poets are placed, which can be read while waiting and walking. It is a beautiful city walk or bicycle route, especially recommended at this time.

The bridge poem by Perquin was written especially for this location (and the people of Rotterdam):

The water here cuts you off, replaces step

by state, now changes to later.

You can break time in two infinitely.

Every view is a country.

Later you look back and see yourself standing again.

Half of each story lies

Ester Naomi Perquin was Rotterdam's city poet in 2011-2012 and Poet Laureate 2017-2018. After her debut in 2007, to which she wrote in addition to her job as a prison officer in Rotterdam, she has received numerous awards. She received the Dutch VSB Poetry Prize 2013 and in 2017 the Flemish literature prize for poetry, the Herman de Coninck Prize. In 2019 she wrote the book week poem Mother. Monice Janson previously designed Latin wall texts for the cornice of the Hof van Sion in Rijswijk, construction of which will start this summer, and the quote from the first paragraph of the constitution that decorates the entrance hall of the Police Academy in Apeldoorn. On www.bruggedichten.nl/parkhavenbrug both explain their poem and design.

Route along Delfshavense Schie - Poetry along the Schie

The bridge poem is part of the Poetry along the Schie route, in which bridge poems by the 'Search for Brilliance' and poetry along the Delfshavense Schie by other initiators have been portrayed. The first bridge poem at the bottom of a bridge in Rotterdam was realized in 2019 on the Mathenesserbrug with a poem by Daniël Dee. (bruggedichten.nl/route).

CBK Rotterdam contributed to this project based on its objective to bring Rotterdammers, art and artists together.