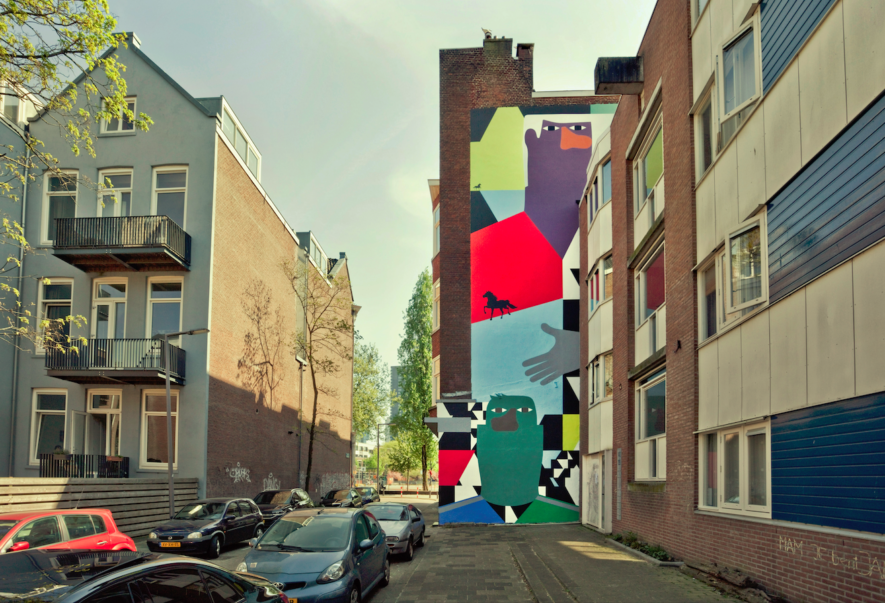 Spontaneous party for mural in Cool

Across the street from the new work is located El Trotamundos, a work of the Chilean muralist Kata Núñez. Anuli Croon reacts with her work to this mural: she placed the horses at a distance and, as in Núñez's symbolic artwork, Croon also seems to be playing with the theme of solidarity.

Cool has made the work more than welcome. The corona crisis could not stop the Zwarte Paardenstraat from celebrating the arrival of this large and colorful painting. After the work was done, much of the street celebrated from their balcony and behind the open windows.

Last year, CBK Rotterdam decided to respond to the initiative by Cool aan de Gang (Ed de Meyer) to embellish the neglected wall on Zwarte Paardenstraat with a mural. Cool works on large-scale urban development in the area, visual art also has a place in it, something that CBK Rotterdam likes to make a positive contribution to.

Because Jorge Kata Núñez's work El Trotamundos in the same street in 2018 completely updated, CBK Rotterdam chose to give a visual response to his work.

The work of Anuli Croon was deliberately chosen for this, because just like Núñez's work, her imagery works powerfully in public space. Both the interfaces and the differences with Núñez made it interesting for Croon to take up the challenge for a design. Atelier Leo Mineur executed the design of Anuli Croon.

The specific location of the wall is the starting point for the design. It is visible from the street, the houses and from all tall buildings in the area you can see the Zwarte Paardenstraat. It is a fabric of landscape and figures, both abstract and figurative, from close up as well as from far away, it must form a whole. In her work Croon uses human figures that have no specific role, which can be filled in by everyone. In this work, Croon wanted to give the human figures the task of a soothing character: a big brother or strong neighbor for the street.

Anuli Croon (Leeuwarden, 1964) lives and works in Rotterdam. In 1989 she graduated from the Academy of Art and Design in Den Bosch and in January 1990 she moved to Rotterdam. Croon paints along the lines of the cartoon. Her work is colorful and looks simple without being simplistic. Croon has completed various assignments in (semi-) public space in the Netherlands, including in Rotterdam-Pendrecht and the Oude Noorden. Also see www.anulicroon.nl